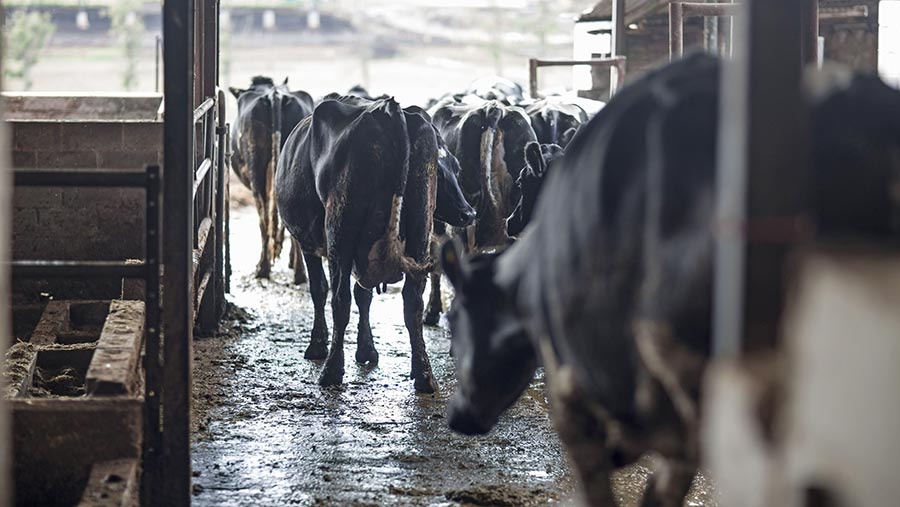 Dairy trade has been firm this month but processor cuts have made heifer bidding a touch more selective, while cow trade has remained firm.

The adage “milk in the tank is money in the bank” is coming to the fore again as flying herds and expanding dairies look for quick milk from heifers and particularly strong cows at the start of what is likely to be a winter of tight forage supplies.

Strong November sales have been reported across the Midlands, with Wright Marshall reporting 45 lots sold for £2,000 or more at its Beeston Castle mid-month sale (13 November).

Auctioneer Simon Lamb reported an average of £1,712 for all 138 heifers sold, with all cows levelling at £1,485. He said trade was driven by new buyers looking for high-quality animals.

Firm autumn prices have been reported at Carmarthen, but Shae Price of BJP Marts has seen trade become “more work” in the past few weeks.

He said a “major factor” had been a Glanbia price drop of 1p/litre for one month in December. “This is understandably making trade more selective,” he added.

He said calf trade had returned to full strength again and sporadic milker demand tended to peak around times farms get APHA licenses to buy cattle after TB breakdowns.

“We usually have one or two bidders with licenses most weeks, but when we have five or six you have a stronger trade as those bidders have to secure cows in a short time.”

Animals in production or close to calving are selling at a good rate but cows a good while off calving are harder to place, according to Jonny Dymond, Shrewsbury Auction Centre Manager at Halls.

He said that Muller’s price drop of 1p/litre from 1 December could come as a signal for other cuts as other processors often “follow suit”.

However, he said: “Often when there is a price drop the trade can sometimes keep going for a while because there are more people around the ring bidding – they expect cows to be cheaper.”