First-class female genetics were high on the Christmas wishlist of Hereford breeders at Shrewsbury on Saturday 10 December, resulting in three new records.

Bidders from across the UK were supported by international calls, seeing trade level at £4,717 for 17 females and three embryo lots going under the hammer of auctioneer Nick Hyne. 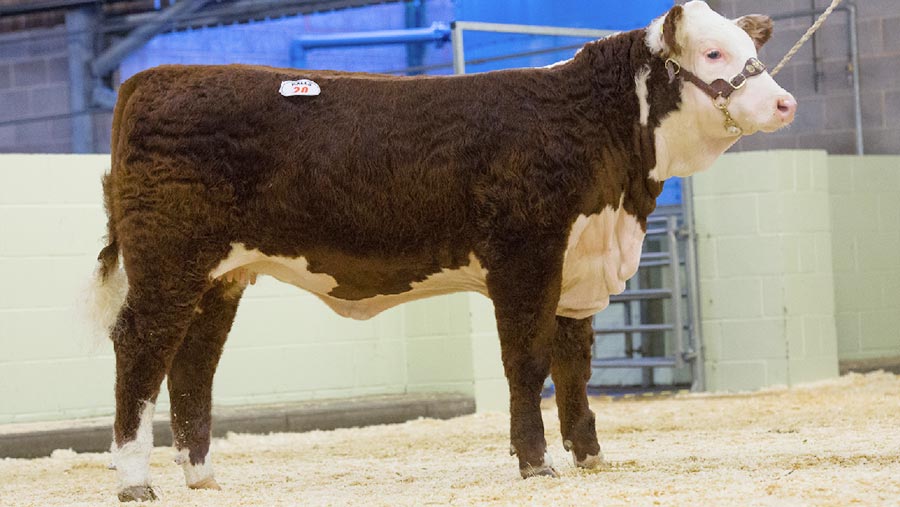 Setting a new breed record for a polled Hereford female was a 10-month-old heifer from the Sky High herd of B Birch and G Brindley, Weeton, Staffordshire, selling for 8,500gns to Adam Bowen.

Sky High 1 Miss Valentine is out of last year’s breed female of the year, Dendor 1 Jennefer 15th, and by Romany 1 Lawbreaker RE L23.

There was “serious demand” for some of the best female genetics in the breed, said sale manager Josh Dowbiggin, who noted a growth in Hereford society membership over the past seven years.

“We plan to make this sale an annual event,” Mr Dowbiggin told Farmers Weekly. “We are very excited about the prospect of the trade and of selling embryos in the future.”

The second-best price of 8,000gns was paid for “breed legend” and twice native interbreed champion Coley 1 Bubbles 249, from Miss H Whittaker, Hipperholme, Halifax. The daughter of the 2012 sire of the year, Blakelaw 1 Calzaghe, headed home with P&J Vaughan. 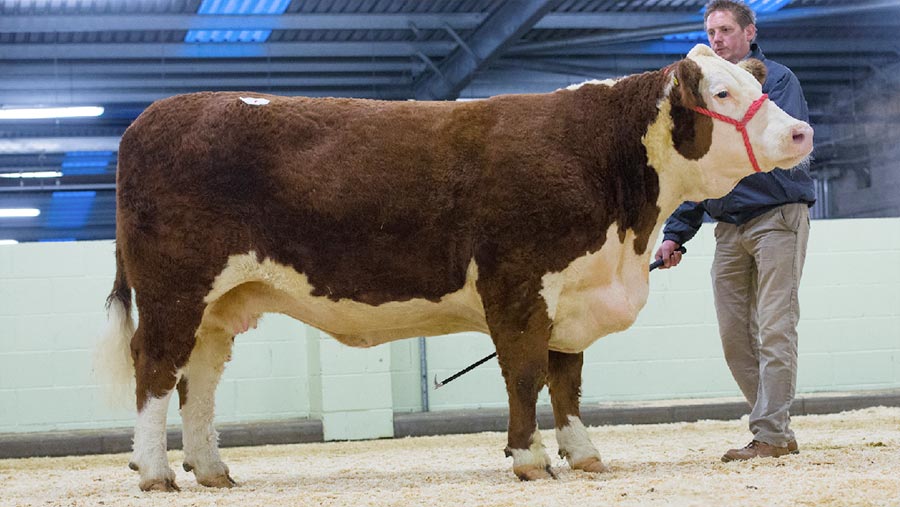 Three more females from the Coley herd sold at Designer Genes. These females were all three-quarter-sisters sired by the five-figure bull Sky High 1 Korker and out of cows sired by Blakelaw 1 Calzaghe.

Danish breeder Henrik Andersen, Elgårdsmindevej 2, Moeskær, sold a flush of any cow from his Moeskær herd for £9,000 to MJT Herefords, Canada and Dara C Entwistle, Illinois.

Another flush of any cow in the herd was also offered on the day, this time from owners of the 2016 Canadian National Champion female Harvie Ranching, Olds, Alberta. The flush sold for £6,000 to DRA Fabb and Moeskaer Herefords.

A late-entry embryo lot came from Rockness Herefords in Scotland. A package of three full sibling embryos to Stars of the Future Female Champion Rockness 1 Matilda KH1 was knocked down to G&MC Shepherd, Woodplumpton, Preston, for £1,860 (£620 per egg).