Prices peaked at 5,000gns, and following an 87% clearance auctioneer Michael Taaffe confirmed that 34 bulls changed hands to level at £2,835 each.

Hitting the headlines in both the show and sale rings was the June 2015 born pre-sale champion Relough Danantory ET PLI £494, bred by Ronald McLean and sons Malcolm and Barry from Donaghmore, County Tyrone.

Sired by the Mogul son Westenrade Altaspring, he is bred from the Morningview Legend daughter Relough Legend Danna 3 VG87, who produced 13,440kgs at 5.14% butterfat and 3.51% protein in her second lactation.

He sold to Sean O’Brien from Poyntzpass, County Armagh. 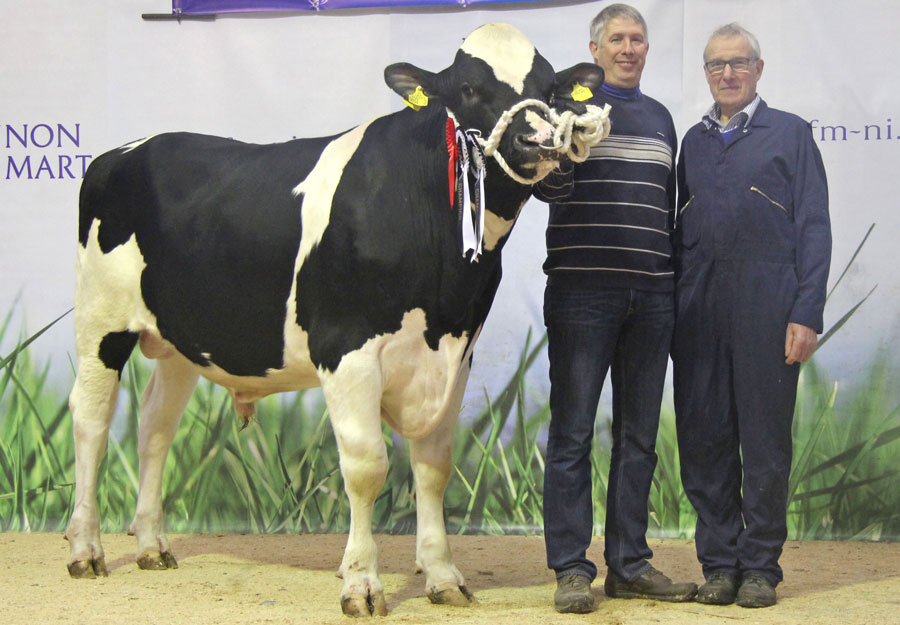 His granddam is the world-renowned Larcrest Cale ET VG89-2yr-USA from the famous Cosmopolitan family at Larcrest. This bull is a full brother to the £32,036 Larcrest RR Cale sold at the 2015 German Masters Sale. Highest bidders were Desmond and Jonathan Moore from Fintona, County Tyrone.

Robbie Smith, and son Stuart, from Londonderry, had a good day at the autumn sale, selling five bulls from their well-known Prehen Herd to average £3,528 each.

Leading the Smith’s consignment at 4,500gns was the unshown Prehen Fredrick ET PLI £517, which sold to David Alexander from Omagh, County Tyrone.

This bull is one of the first Octavian sons to sell at auction in the UK, and is a maternal brother to Prehen Omen – the number one UK-bred proven bull.

The Immunity Plus sire Vieuxsaule Flame ET was also behind the breeding of the 4,000gns Killane Delta PLI £333. This third-prize winner is bred from five generations of EX dams from the noted Dellia family, and joins David and Alan Wallace’s Abercorn Herd based at Antrim, County Antrim.

Born in September 2015, he was sired by Seagull Bay Silver ET, and is bred from Clongowes Atwood Thelma EX92 – intermediate champion at the 2014 Irish National Holstein Show.

This one came under the hammer at 2,900gns, selling to Wilbert Kennedy from Ballyclare, County Antrim.