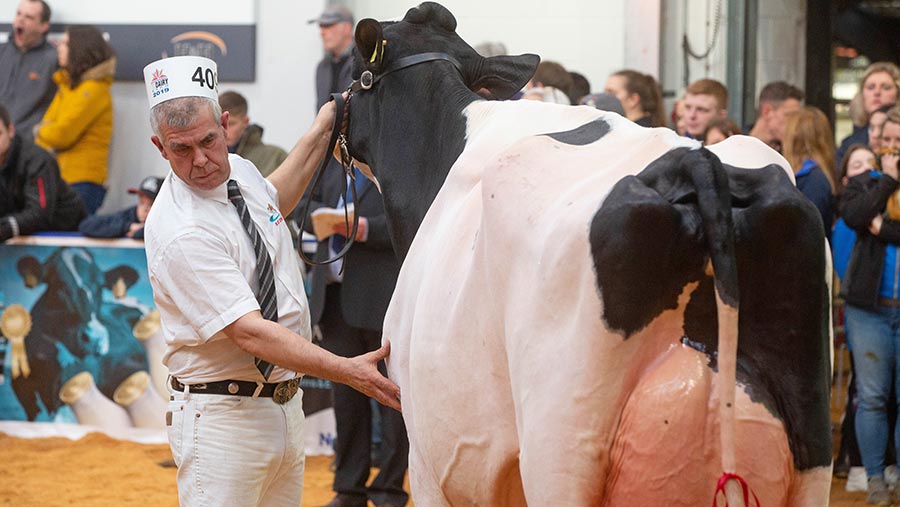 Visitors from across the UK and as far afield as Finland, Spain and Guatemala headed to the eighth Borderway UK Dairy Expo on Saturday (9 March) to admire 70 high-quality classes.

A strong show delighted Canadian judge Carl Saucier, who, along with US judge Molly Sloan and Mark Logan, Northern Ireland, tapped out Sahara-Sanchez Ambrosia 3 as their overall interbreed winner.

Mr Saucier said he was bowled over by the quality on the day, considering 12 elite Holstein cows were not exhibited and were instead saved for the European Holstein Champion competition in Libramont, Belgium, next month.

See also: Video: A guide to preparing and clipping a calf for the show ring

The Holstein and interbreed champion Sahara-Sanchez Ambrosia 3 was described as a fantastic cow with a great mammary system and a beautiful open rib by judge Molly Sloan.

No stranger to Carlisle, the red-ticket winner was bought at Borderway for 5,800gns in 2014 by co-owners Michael and Barbara Hollins, Barmick herd, Staffordshire, at the Newabbey dispersal. 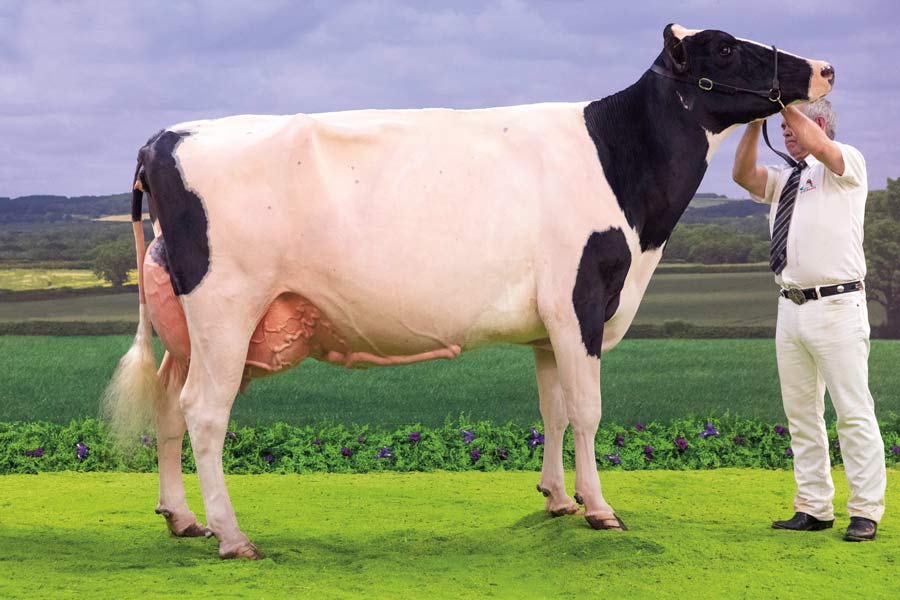 She was exhibited by the Riverdane team, Middlewich, Cheshire, which owns a half-share.

She is a Gen-Mark Stmatic Sanchez daughter, out of Smiddle Toystory Ambrosia and gave 15,205kg in her third lactation.

Previous show success has come in the form of class wins at Telford and supreme championship rosettes at Nantwich and Agriscot in 2018.

A great day was had by the Sandyford team, which dominated the Ayrshire accolades before taking the interbreed reserve rosette.

Sandyford Prime Heather Honey is shared between breeders ET Tomlinson, Loughborough, Leicestershire, and Beth Granvill, who bought a 50% share in the three-year-old at the Perfection Collection sale, Shrewsbury. 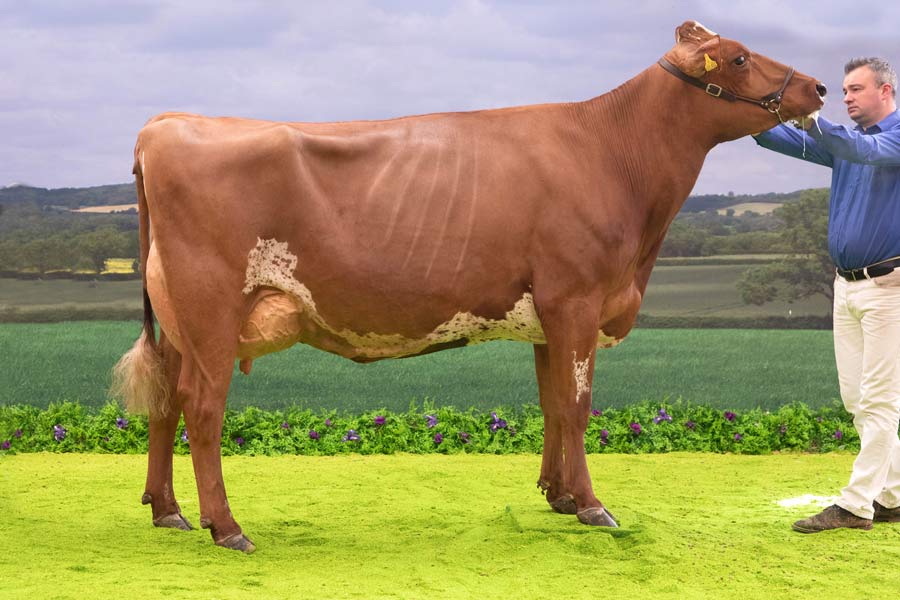 Giving her reasons, judge Molly Sloan said she loved her style and exceptional shape and praised her udder width and open rib.

Honey is a daughter of Canadian sire De La Plaine Prime and is out of Sandyford Burdette Heather Honey.

She is giving 45kg after calving in December with her second.

She calved in November and is giving 44kg. She is out of Clifton Julian Clover and by Pannoo Abe Vanahlem. 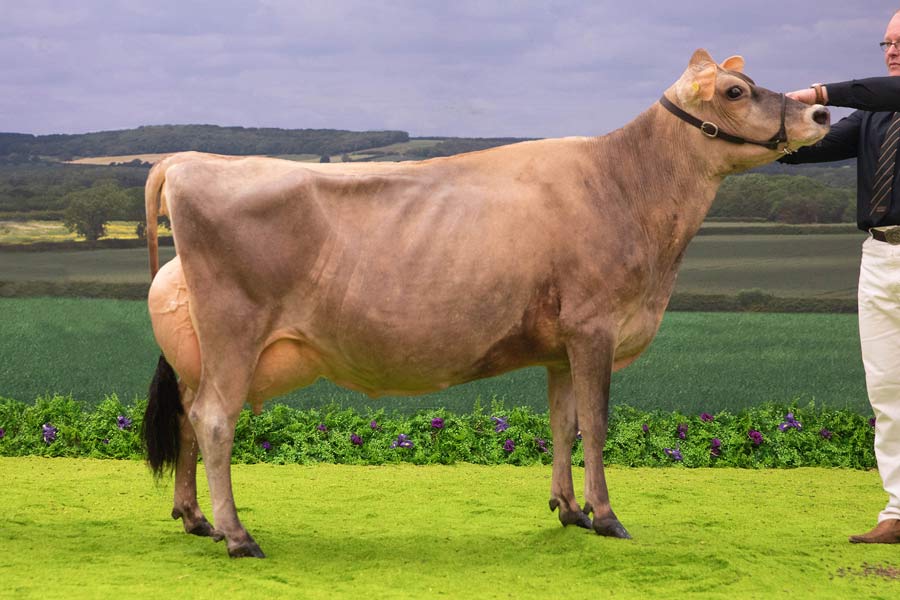 Bred by the Hunter family, the second calver is by Bridon Excitation and out of Clydevalley Governor Magic, who was classified as excellent last week.

She won her class last year at Borderway, was placed at Colmar in 2016 and also boasts championship wins at the Penrith and Cumberland shows.

Back home, she is giving 57 litres after calving in November in a 460-head herd averaging 11,900kg on robots.

It was déjà vu in the Brown Swiss ring with the Lochhead team, Mouswald, Dumfries, reigning supreme once again, with fourth-calver Kedar Rhapsody (EX93), which took its third consecutive Borderway Expo breed championship.

She calved a month ago and is giving 48kg a day. 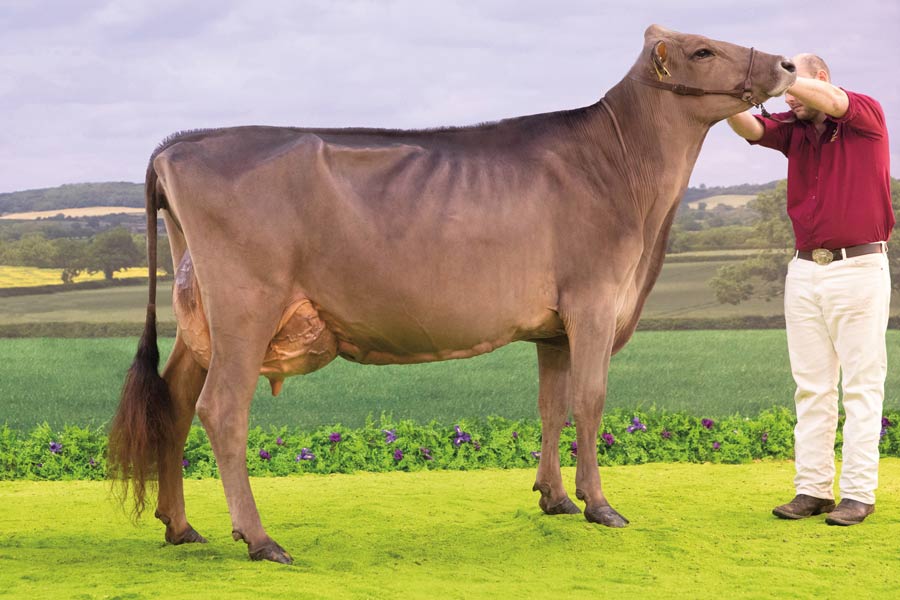 She is sired by by Vetschs Nesta Calvin, and her dam, Kedar TD Reia (EX93), won twice at Carlisle.

In reserve was Kedar Vigor Heike, another junior cow from Mouswald, this time by Sun Made Vigor and out of Kedar Becks Heike.

She calved six weeks ago with her seventh calf and is giving 45kg a day.

She won as a calf and a heifer at the Royal Highland Show, took the heifer red ticket at Penrith show and is predicted to yield 7,500 litres during her current lactation.

Her dam is Winbrook VI 136 and was bought privately from David Dent of the Winbrook herd. 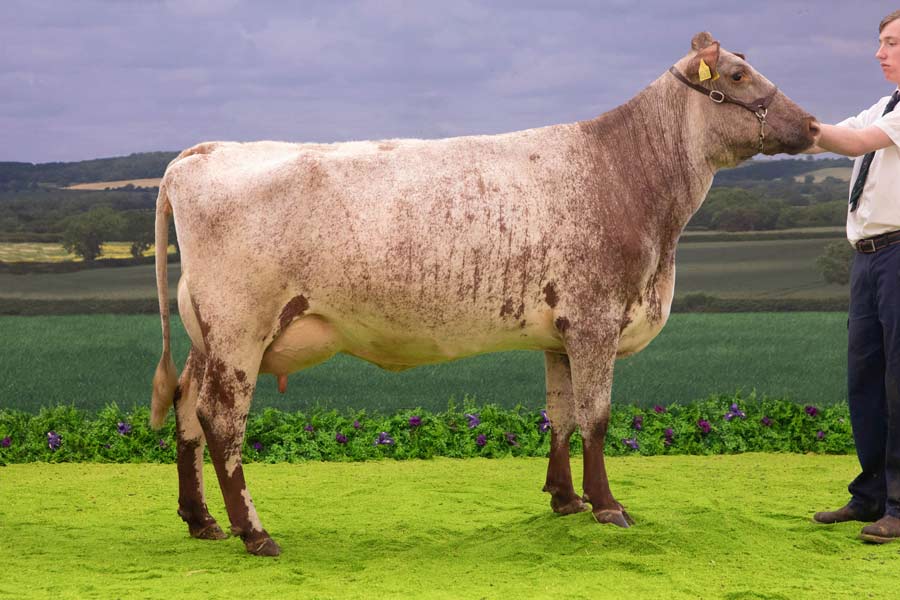 In reserve was Aprilday Wisconsin daughter Tanat Rosemary 2 from the Baileys, Llanrhaeadr, Oswestry, on her first show outing.

This one calved on 12 January and is giving 31kg and is out of Tanat Milverton Darowen.

She gave 7,300 litres on her second lactation in the 85-cow herd back home.

Oakalby Quadrant Cathy 50 from the Burroughs, Aldeby, Suffolk, returned to take the Friesian championship in her first showing since last year’s red-ticket success.

Shown by herd manager Robert Ives, this one is giving 32kg and has already yielded 7,900kg at 180 days in-milk.

She is due to calve again in September after a September calving. 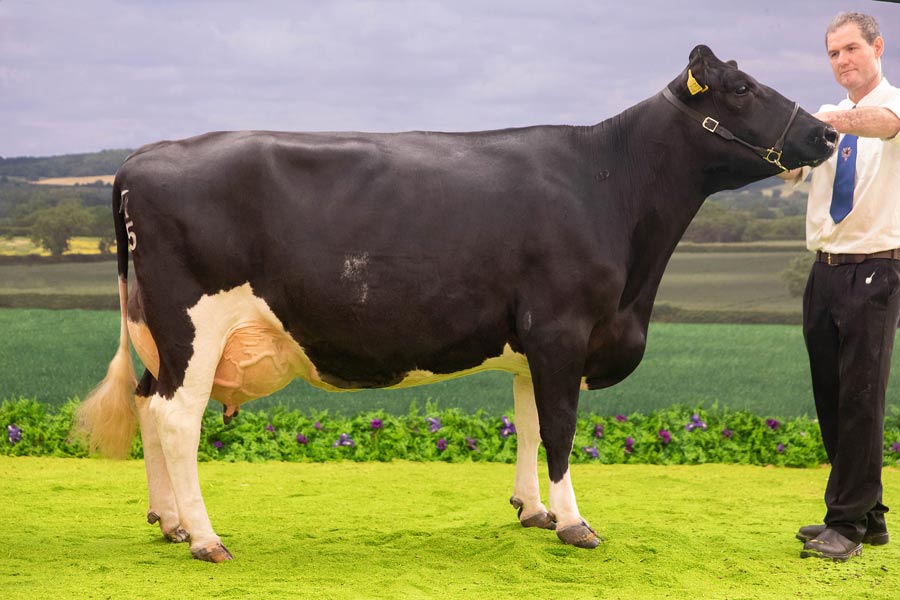 The first calver is two months calved and giving 32 litres.

She is out of Adams Laura 3 and by the stock bull Raby Jazzman, which was bought at the Raby dispersal sale.

A strong show of Red and Whites was won by Richaven Absolute Stocking Red from RA Bown, Hanley Castle, Worcester.

His victor was eight weeks calved and is giving 49kg.

This one was bought privately and is by Apples Absolute Red and out of Crockers Rock Stocking Red (VG88). 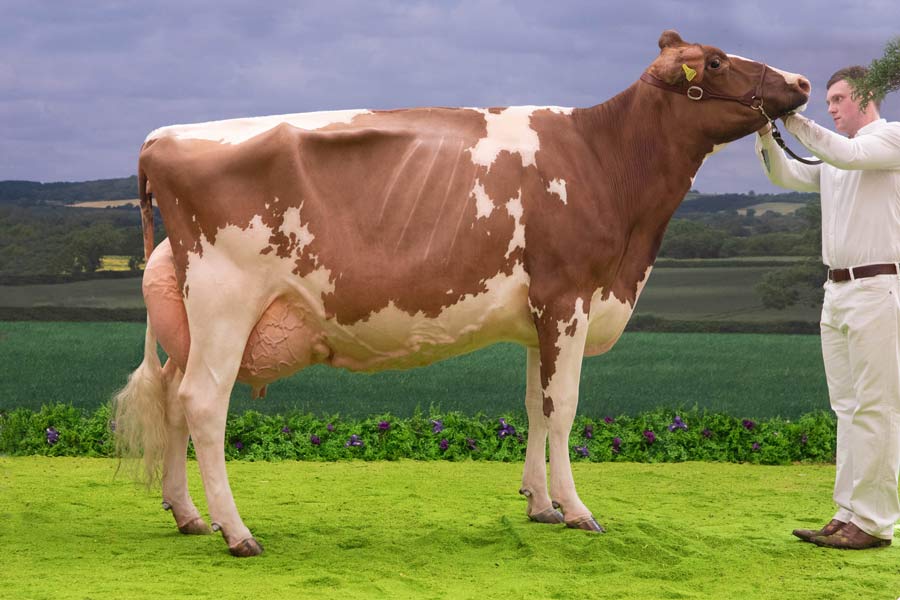 This added to her tally of red tickets at AgriScot in 2017 and All Britain intermediate heifer in-milk win last year.

In reserve was Sandyford Lucky Florrie (EX90), a daughter of a home-bred bull called Lucky Charm and out of Sandyford Reality Florrie.

This one was breed champion at last year’s Royal Welsh Show and is giving 47kg 23-weeks calved back home in the 230-head herd averaging 8,500 litres.