Heifers reigned supreme at the 2019 Beef Expo on Thursday (23 May) at North West Auctions, Kendal, where a home-bred Limousin-cross heifer took the top prize.

Born in April last year, this year’s Supreme champion was a red heifer called One and Only, who was the pick of more than 130 cattle entries and 10 classes from 28 counties across Scotland, England and Wales.

Weighing in at 480kg, she dazzled the crowd and judge Gavin Scott, Gateside, Linlithgow, with her temperament, conformation and locomotion.

“She handled superbly well and has a lovely commercial carcass that would suit any butcher any week of the year,” said Mr Scott. 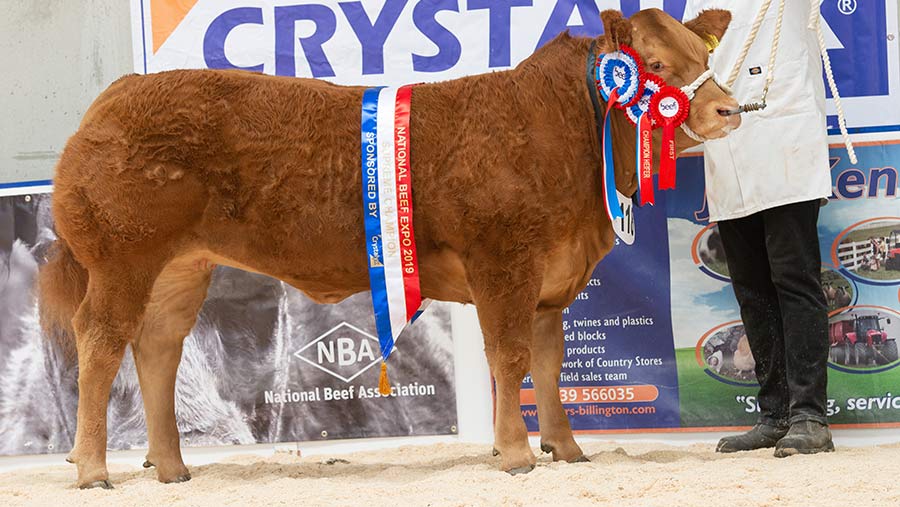 Supreme champion: One and Only from John Williams

One and Only’s father is the much-admired AI bull Waindale UFO, who featured several times in the breeding of several stand-out entries.

Her dam is a pedigree Limousin cow by the easy-calving Huntershall Filleppe from Mr Williams’ 20-cow suckler herd.

She was fresh from her success as champion at Nefyn Show earlier in the month and is heading to the Royal Welsh Show this summer, with Mr Williams keen to keep her in the herd as a breeding female.

In overall reserve was another home-bred daughter of the noted show calf sire Waindale UFO, out of a Charolais-cross Carradale Neptune daughter shown by breeder Jennifer Hyslop, Girvan, Ayrshire.

Weighing in at 487kg, Queen of Hearts was a show winner as a calf at Countryside Live in Harrogate last year and won first place at the East of England show in June, when she was just a month old.

Her next high-profile outings will be the Great Yorkshire and Royal Welsh Shows in July. 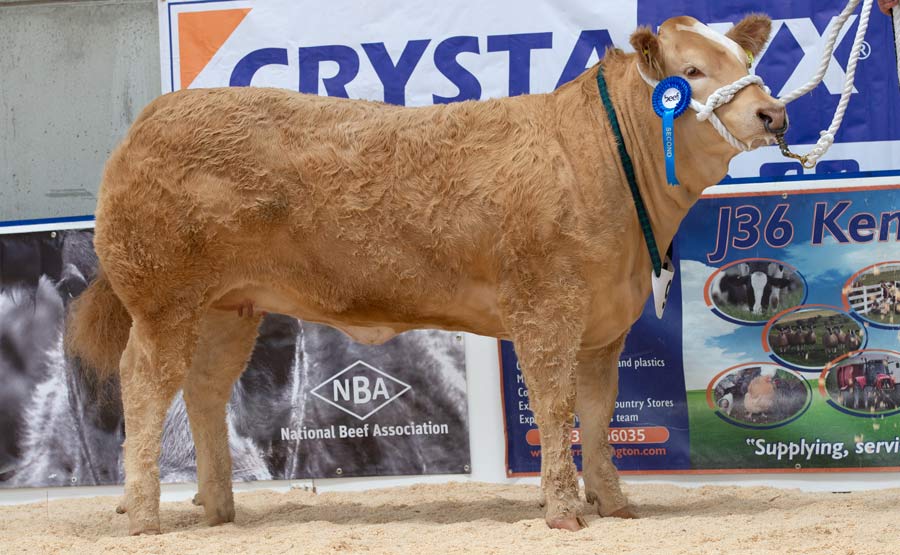 A strong steer competition was won by Doodle Bug, a Lodge Hamlet son from A and E Vance, Whithorn, Newton Stewart, shown by Amy, aged 11.

Originally bred by DS and CM Edwards, Gwynedd, the Vances bought the red-ticket winner as a calf for £1,200 in December at the Royal Welsh Winter Fair. 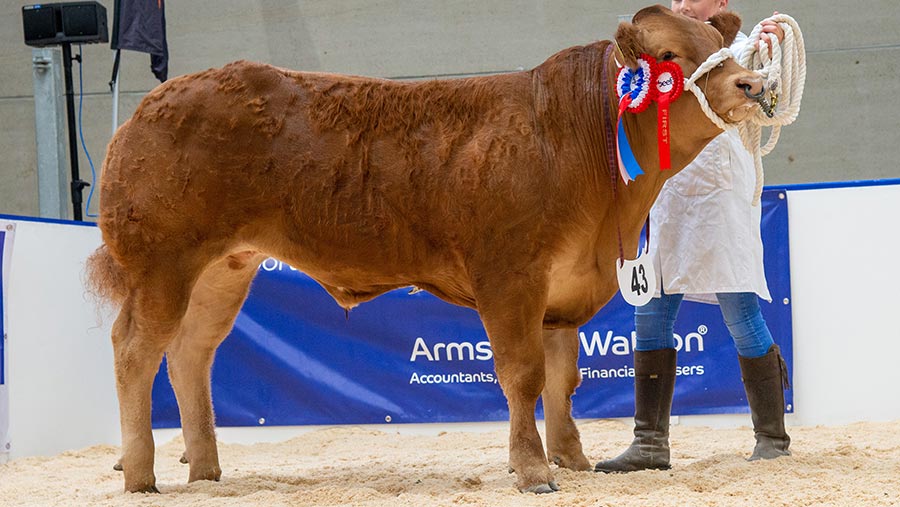 The success follows a championship win for the Vance team at the Carlisle Beef Expo in 2006 and a first prize in the bullock section at last year’s Beef Expo at Shrewsbury as well as first prizes at Ayr Show and the Interbreed Group of three.

Weighing in at 510kg, the May-born yearling will be heading to the Royal Highland and Great Yorkshire Shows this summer.

Standing reserve in the steer section was Dark Destroyer, a Limousin-cross from JM and SM Rowlands, Llanidloes, Powys.

Dark Destroyer weighed in at 546kg on the day and is by a Limousin bull and out of a Blue-cross cow and was bought at Brecon in February for £1,650.

He was originally bred by DE and G Davies, Builth Wells, and was born on 30 April last year.

The 2019 Beef Expo was his first show outing, with the Rowlands team next targeting the Shropshire County and Staffordshire County Show this summer. 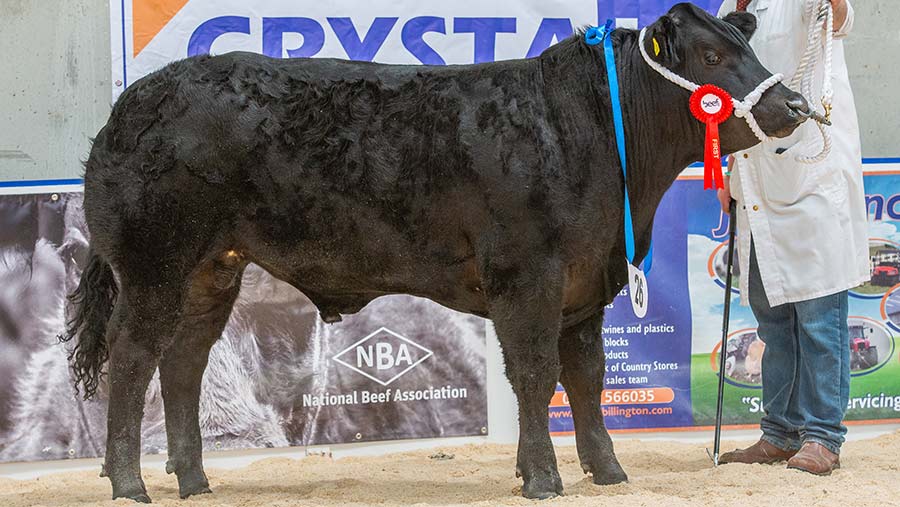 Bred by Dafydd Lewis of JM and AM Lewis, Llanwrda, Spice Girl was bought for £3,200 at the Ruthin Show Potential Sale in February.

She is by an unregistered pure Limousin bull going back to Pengelly Bart.

This is her second trip out after winning the light heifer classes at Nefyn Show in Gwynedd.

She will head to the Royal Welsh Show after the Roberts team won the commercial championship there last year. 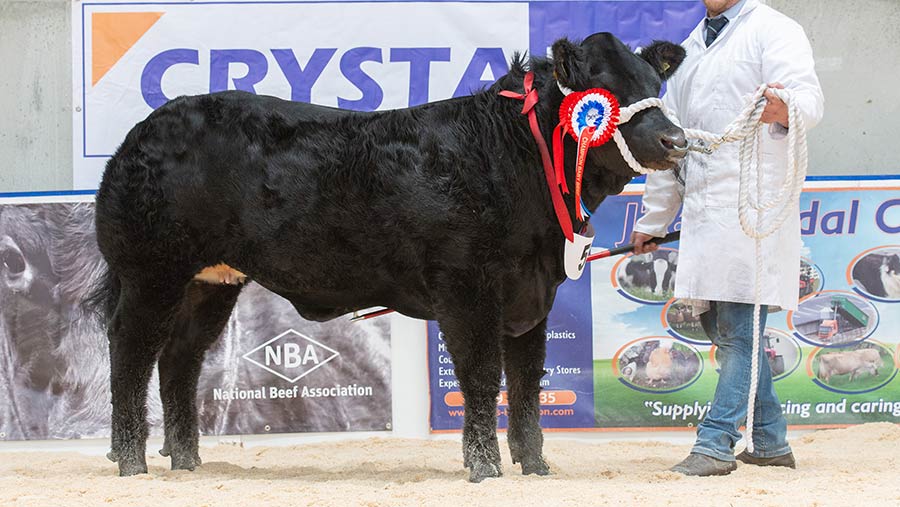 In reserve was Shakira from the Wilkinson and Marwood team, Leyburn, North Yorkshire.

Bred by John Smith-Jackson, Melkridge, Haltwhistle, the Hightown Jacko daughter was by a Limousin-cross cow, again by the prolific Waindale UFO.

Shakira’s first outing was at Skipton, where she got a creditable fourth place and she will head to Wensleydale show in August. 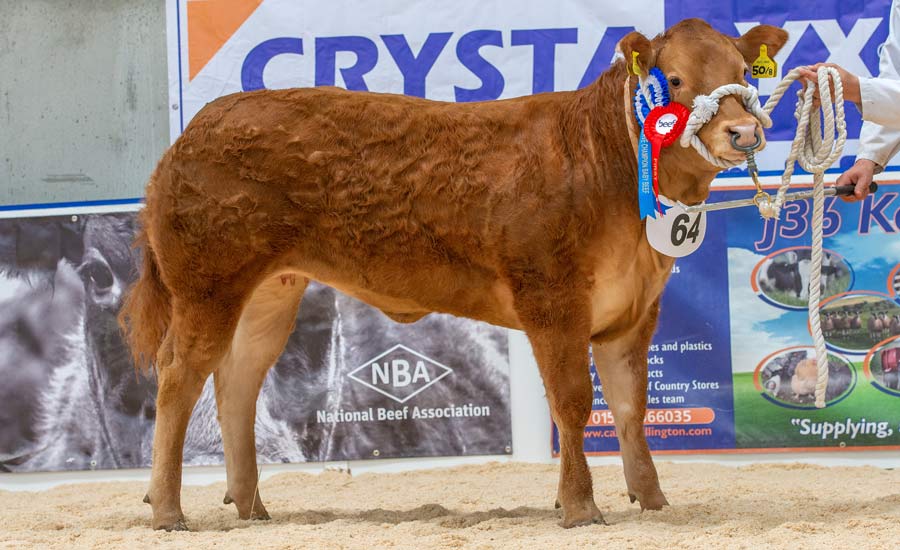 A home-bred bull from the Rufford herd took the overall championship rosette at the fifth South Devon performance championships.

Rufford Reggie from RW and SM Bostelmann, Eccleshall, Staffordshire, is by Z Hawkley SAS Javelin and out of the Westham Security 5 daughter Z Rufford Erica 20 (EX92).

He is positive for milk and scrotal size and rates +66 in the breed’s quality beef index and +70 in the suckler replacement index. 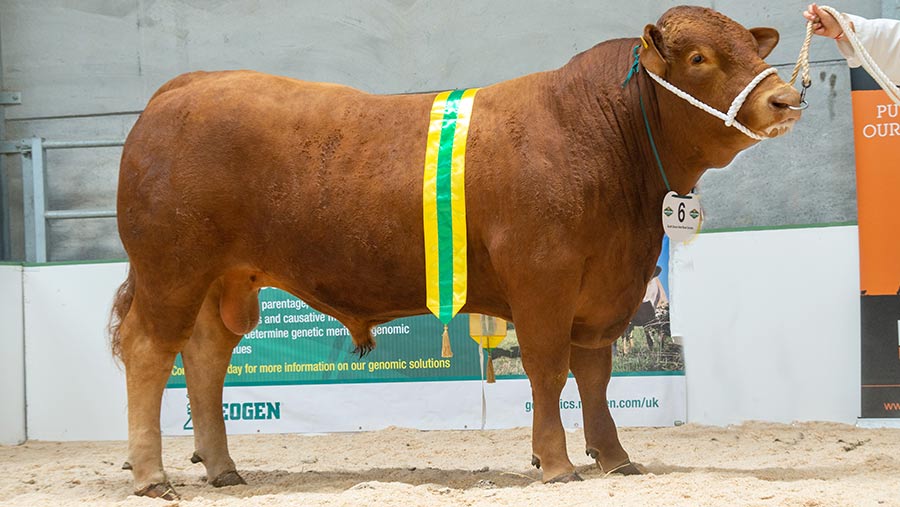 Giving his reasons, Mr Rowe said: “His top line was excellent, he’s full of character and his figures bear out his conformation.”

She is a Z Eyton Trusty 3 daughter out of the Rufford SAS Dillon daughter Z Cilgwrrwg SAS Zolly.

She is currently in-calf to Hawkley Javelin and sits in the top 10% of the breed’s estimated breeding value and in the top 5% for milk.

She was shown as a yearling and has been a prize winner at various local shows across the Midlands.

Cas was heading straight off to the Shropshire County show and was going to compete at the breed’s National Show and the Royal Welsh in July. 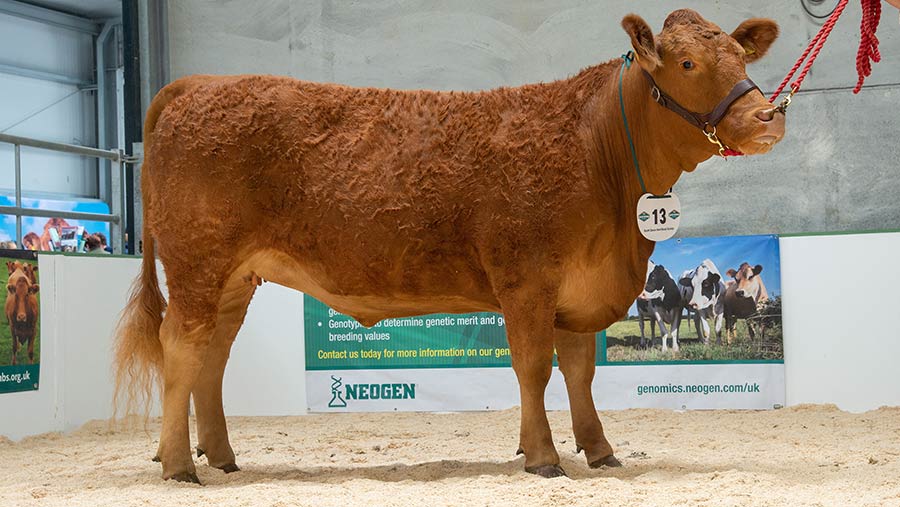