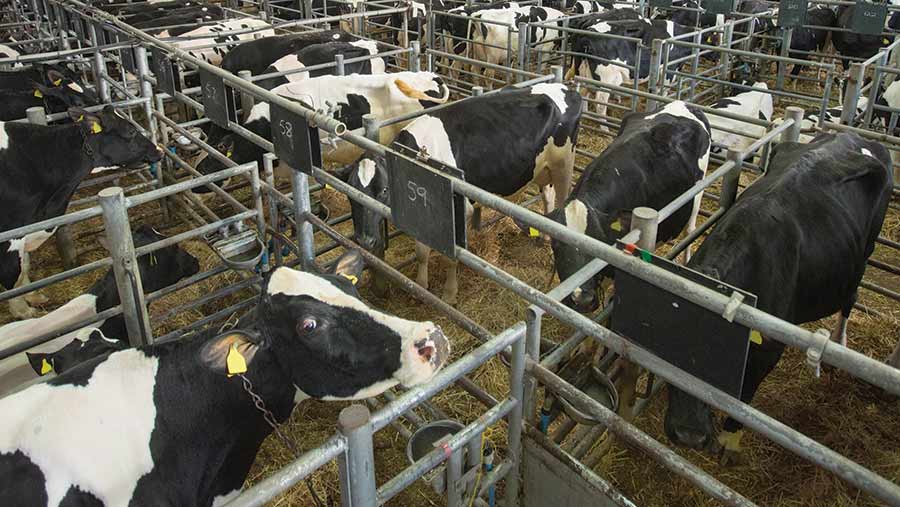 Despite farmgate milk prices on the rise and many farms receiving close to the 30p/litre-mark, several sales have reported a cagey start before bidding has settled.

But daily UK deliveries are forecast to stay 100m-500m litres back on the year heading through the summer and autumn, according to Defra figures.

Wright Marshall reported a slow start to proceedings at the July mid-month sale (8 July). Heifers returned a £1,498 average, with cows perhaps most affected by the slightly easier trade, down £279 on the month to £1,357.

Tuesday’s (17 July) Sedgemoor collective sale saw high-yielders in strong demand, with cows the best trade and a shortage of freshly calved animals resulting in averages of £1,883 for cows and £1,716 for heifers.

An “easier trade” was reported by Bagshaws at Leek earlier in the month, where first-quality heifers averaged £1,743, with second-quality heifers and cows back £100 on the week to about the £1,430-£1,480.

However, reports from the rostrum described trade as staying remarkably solid, with particularly strong demand for Shorthorn crosses.

Carlisle saw extra caution around the ring, although, at the monthly sale (4 July), confidence built through the sale leaving prices on a similar footing to previous sales.

“The drought is really a double whammy coming after the extra expenses of last year,” dairy auctioneer Glyn Lucas of Harrison and Hetherington told Farmers Weekly.

“I think trade will stay strong, milk is going to be short this year.”

However, he stated the picture was very mixed, and while the drought would continue to put downward pressure on prices, there were several bullish factors countering this.

He said that drier silage is higher in dry matter, which means more DM/kg. He added that milk prices are heading to 30p/litre – Arla announced a 29.31 liquid milk price for July.

He stressed that strong cull cow prices and restrained milk production forecasts for the rest of the year were two further key bullish factors at play in the market.

Mr Lucas said: “I’d say farmers were confident in the medium-term milk price. But there could be a scenario where people have to buy more feed again. Milk is dropping and farms will be looking to keep production level.”