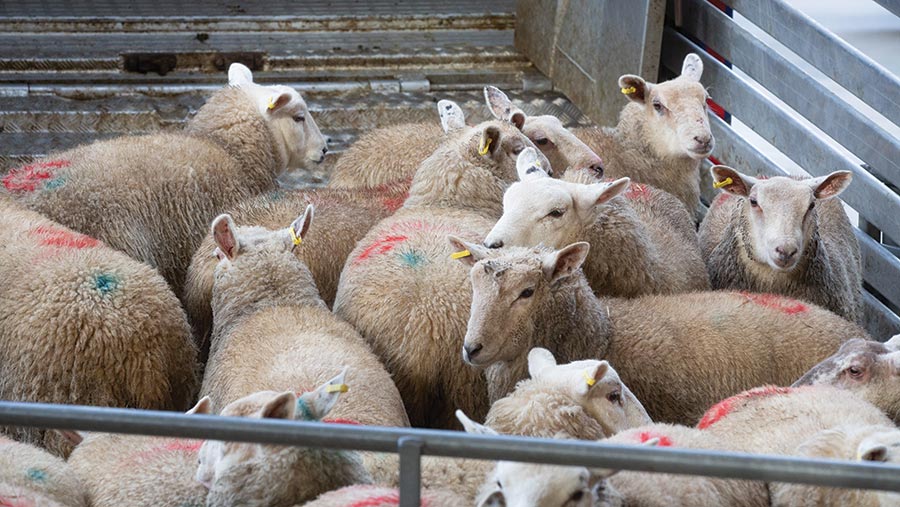 Prime lambs lost about £3.50 a head on average last week as markets saw supply outstrip demand and trade level at an SQQ of 167.52p/kg.

This was the first time the Great Britain Standard Quality Quotation (SQQ) had fallen below 170p/kg in 11 months.

Throughputs had their second late-summer surge last week, lifting 22% over the previous seven days, to 91,333 head, with demand unable to match supply.

This was not the case a month ago, when lamb throughputs rocketed to 121,536 head (44% on the week) in anticipation of Eid, which actually saw increased festival demand help lift SQQs 8p/kg to 186p/kg.

More lambs had been turned through the market in favour of abattoirs, which had made trade difficult.

Meanwhile, limited interest from European and domestic buyers meant the biggest challenge at times was keeping buyers around the ring.

“We had about 800 more lambs that would normally have been slaughtered in the deadweight system,” said auctioneer Tom Wrench.

“The deadweight price has really dropped and some farmers have come and thanked us for a better trade than the abattoir.”

Consistent numbers have been reported at Monmouth recently, although, because of larger sales further north, prices have taken the seasonal slump in line with national trends.

Auctioneer Lyndon Trumper said a significant number of lambs, particularly those coming off higher ground, may be better off being sold in the store section.

Mr Trumper said a lot of lightweight lambs at 30-36kg were making about £50-£60 and could make £4-£5 a head more in the store ring, depending on type and quality.

The best 42kg lambs were passing the £70 a head mark and purebred hill lambs were making 150p/kg, with meatier, terminal-sired lambs at 175-180p/kg.

He said: “With ample grass and fodder produced this summer there is demand for store lambs, which, considering the market store lambs might be facing in the future, is quite surprising.”

He added that trade was “clearly not great”, which was being exacerbated by rising input costs that were hurting margins.