Limousin bulls sold to a top price of 8,300gns at the British Limousin Cattle Society’s May sale, held at Brecon Market at the weekend (Saturday 14 May).

Sale leader was the reserve supreme champion Whiskey Jazee from G Walters, Llansoy, Usk. This December 2014-born embryo calf is by Powerhouse Elite and is out of Wilodge Dellola, a daughter of the noted Sarkley Bellola. Whiskey Jazee came from 10 eggs purchased from the noted Shifnal-based Wilodge herd, which have resulted in six females and three bulls, including Jazee. 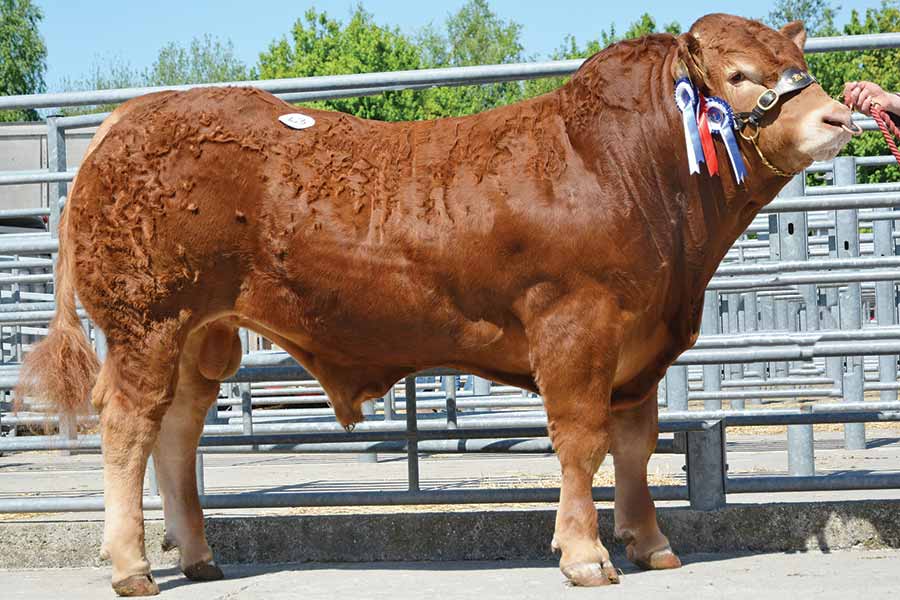 Purchasing the top-price bull was S Gunter and OD Tranter, Raglan, Abergavenny, who run the Illa pedigree herd alongside a 140-cow commercial herd. 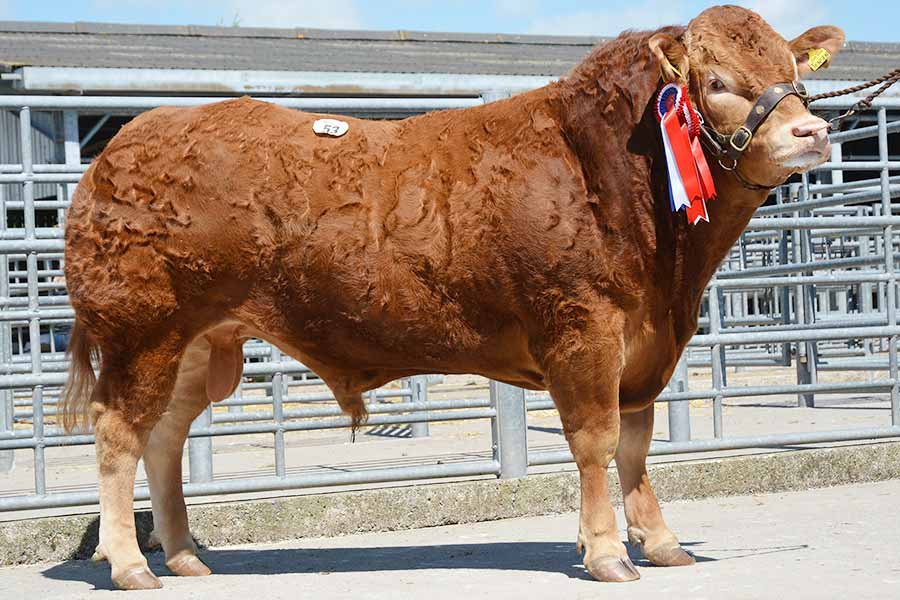 Next best when selling for 8,200gns was the supreme overall champion, the November 2014-born Dyfri Jensen from DG and MJ Edwards and Son, Llandovery, Carmarthenshire. This bull is by Plumtree Deus and out of Dyfri Dream, a Senateur daughter described as one of the best young cows in the herd. Purchasing this bull, which carried a beef value of LM+43, was the Monaughty pedigree herd of C and S Thomas, Knighton, Powys. 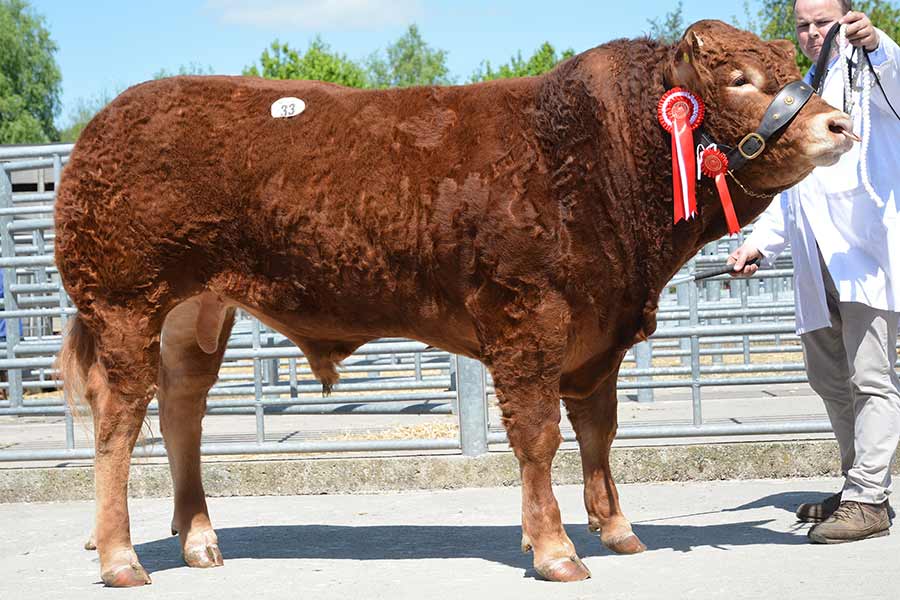 The third-highest priced bull, at 8,000gns, was Haulfryn Jubilee from RG Whitley, Buckley, Clwyd. Entirely French bred, this September 2014-born calf is by Arthur, the national champion at the 2009 French National Show, and out of Flanelle. Taking this bull home was DE Evans, Mold, Flintshire. 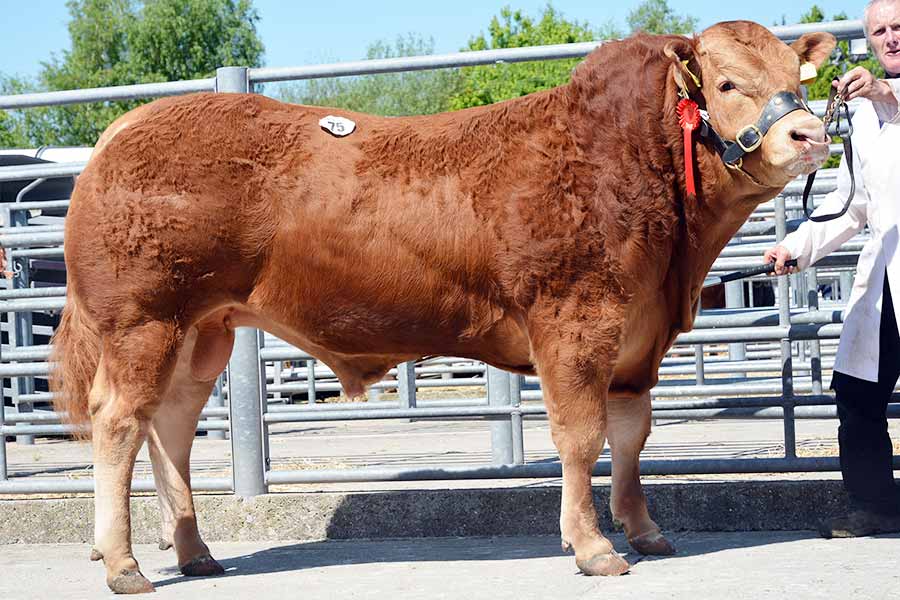 The second-youngest bull in the catalogue, Garyvaughan Lely, from Colin Lewis, Welshpool, Powys, sold for 4,600gns. This calf is another by Plumtree Deus, the Garyvaughan herd stock bull, and is out of Garyvaughan Chelsea, a Nouvelle Prospect daughter. This bull was knocked down to DE Lloyd, Caersws, Powys.

Two lots earlier, Rhiwllech Lord made 4,400gns when selling for DM Howells, Port Talbot, West Glamorgan. A February 2015-born son of the noted Cloughhead Lord, Rhiwllech Lord is out of Rhiwllech Gemma. Purchasing this bull was B Davies, Llangynidr, Crickhowell. 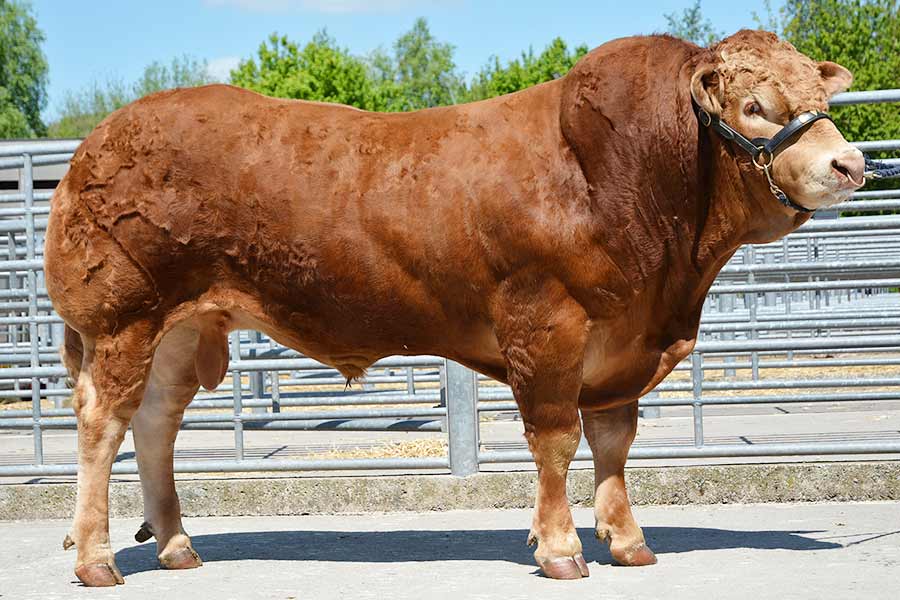 Just shy of this at 4,200gns were regular consignors JH Neale and Son, Launceston, Cornwall, with their May 2014-born Nealford Jaydee. This bull was placed first at the Royal Cornwall Show last year. By the herd stock sire, Procters Cavalier, and out of Nealford Alexis, Nealford Jaydee was bought by WG Woosnam, Newtown, Powys.

The sale of females was led at 2,400gns by the served heifer Sherry Iona from T and S Jones, Clehonger, Herefordshire. This November 2013-born heifer is by the Objat son Etudiant and is out of Sherry Gigi, a Wilodge Vantastic daughter. Purchasing the top-price female was the Forge herd of T Pearson, Hampton Bishop, near Hereford.