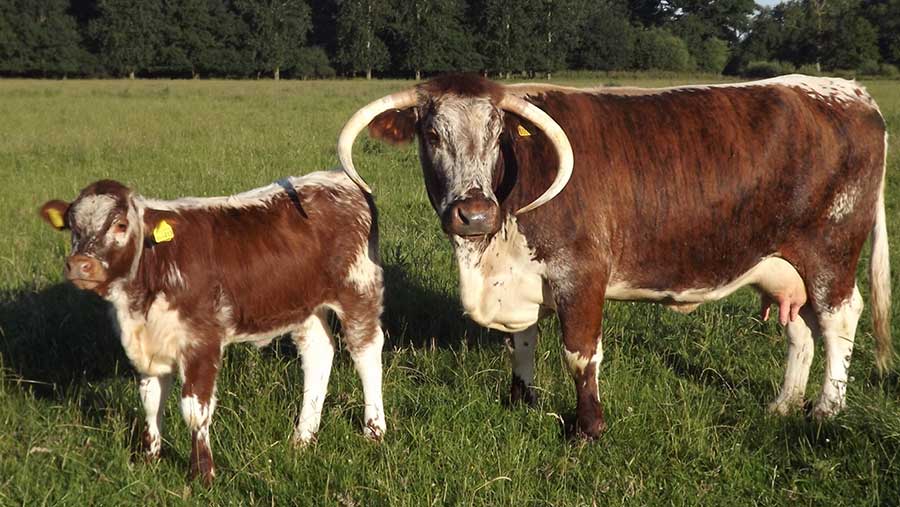 Gorse Rosa with a heifer calf at foot

Longhorn breed records were torn up over the weekend (18 August) as the majority of the famous Gorse Longhorn herd was dispersed at Worcester.

Eight-year-old cow Gorse Rosa with a heifer calf at foot sold for 12,000gns – the highest price ever paid for a Longhorn – to the 11th Earl de la Warr, Withyam, Sussex.

Rosa is by Underknoll Quest and out of Gorse Iberis, selling with her Lockinge Kit heifer calf at foot.

Breed secretary Debbie Dann told Farmers Weekly that after a long career of show and sale success, the Briggs thought it was time to start scaling back.

“The Gorse herd is the oldest established private herd in the breed and regularly did well in the show ring, achieving good sale prices,” she said. “While it’s a shame they are cutting back, the overall picture is of growth in the breed, growing from just a few hundred in the 1970s to over 5,000 today.”

Gorse Yukon, an 18-month-old Gentons 007 James Bond son, sold for 5,400gns. He goes back to the record-breaking Carreg Cennen and is out of Gorse Rosa.

He was knocked down to Yvonne Ferguson, Steyning, Sussex, for her Maudin herd.

Rosa set the trend for a strong sale, with a total of 14 cattle making more than 2,000gns.

At 3,800gns was cow-and-calf outfit Gorse Umber, a third calver with a Gorse Samson bull calf at foot. She knocked down to David Howden, Charlbury, Oxfordshire, for his Pointer herd.

Next at 3,400gns was third calver Gorse Umbrella. She also sold to Yvonne Ferguson, with a heifer calf at foot.