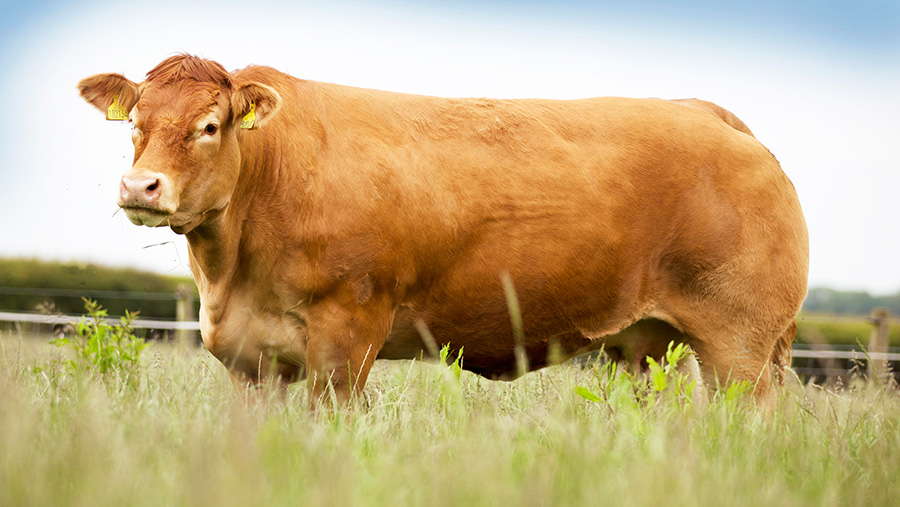 The 50,000gns top price is the leading Limousin price this year in what has been a strong year of pedigree sales, with averages hitting £5,277.

The day’s leading price of 50,000gns was paid for the four-year-old-cow Millington Highlight sold with her Norman Hawk-sired heifer calf at foot, Millington Limelight.

She last calved in October and was served to the French sire Ecran in April, having won reserve supreme champion at the Great Yorkshire Show in 2014 and 2015.

The Goulds are in the process of establishing the Woodmarsh herd prefix, while Jonathan and Tom already have the Everpark herd prefix.

Commenting Mr Gould, who also runs 300 dairy cows and a pedigree Texel flock, said: “In establishing a new herd we wanted to start with something exceptional and in my mind a cow like this very rarely comes on the market.

“She’s a superb cow visually and just full of breeding and quality.” 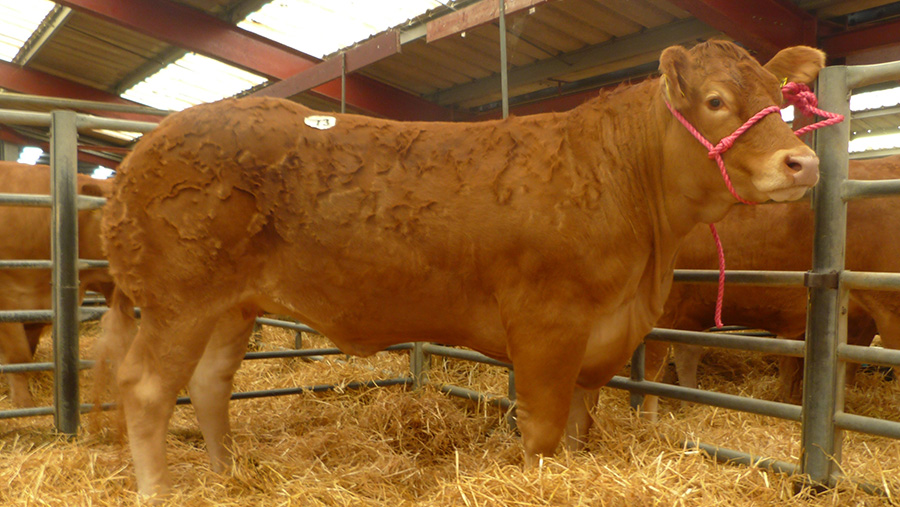 This November 2014-born calf is by the French sire Ecran and again she sported some outstanding performance figures, with a beef value of +61 and 400 day growth rate of +105.

Purchasing this maiden heifer was John and Pat Varley for their Queenshead herd based at Queensbury, Bradford.

The sale of the Millington herd, owned in the past two years by Ashcourt Farms, followed a company restructure and change in farming policy.

The Millington herd was originally established by John Weatherill some 16 years ago and Mr Weatherill, who is looking to re-establish a Limousin herd, featured in some of the purchases during the day.

Leading Mr Weatherill’s purchases was the 12,000gns he paid for the served heifer Millington Joyous.  Joyous is a Greenwell Fieldmaster daughter and out of the Highlander sired Millington Gracious.

He also bought the 10,000gns Millington Hilton who was sold with her first calf at foot – the bull calf Millington Mayfair by Norman Hawk.

December 2012-born, Hilton is by Objat and is another out of the same dam as the top-price, Brockhurst Option, and sold having ran with Spittalton Imji and Norman Hawk in June and July respectively.

Making 11,800gns was the heifer calf Millington Lapwing who was bred the same way as Hilton.

She sold served to Norman Hawk with her crossbred calf at foot and was purchased in a two-way split the Calogale herd of Messrs Lee, Kidwelly, Carmarthenshire, along with the Frogmore herd of Chris White, Moreton-in-Marsh, Gloucestershire.

The final lot to make more than 9,000gns was Millington Gorgeous who sold earlier in the day for 9,200gns.

This 2011-born cow is a Mas Du Clo daughter out of Brockhurst Option and was sold with her April 2016-born bull calf Millington Majestic at foot, a Norman Hawk son.

This outfit was purchased by Bruce Goldie, Mouswald, Dumfries.