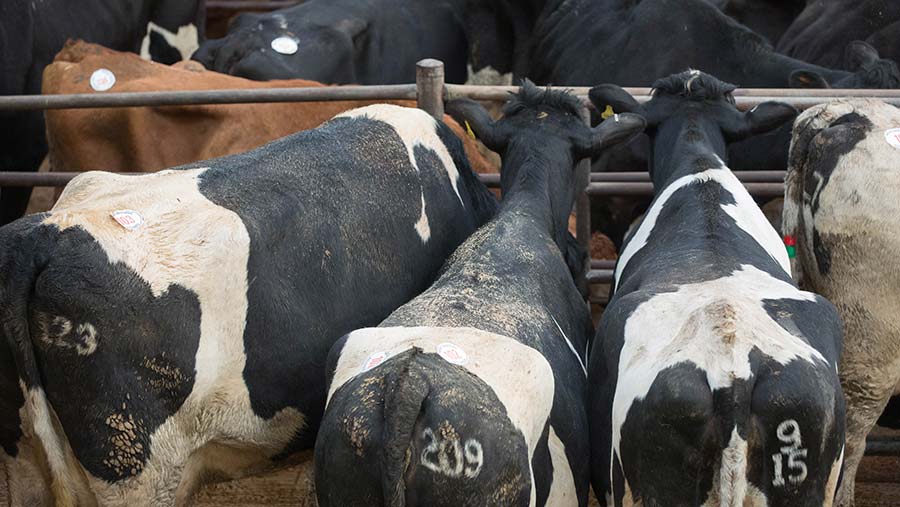 Phenomenal and at times record cull cow prices have been unable to coax more cows to market, as auctioneers report a national average price of 132.88p/kg to start June.

This leaves cows at least £100 a head dearer after starting the year at 110p/kg, as even the poorer sorts make 90p/kg.

However, auctioneers say TB restrictions mean many are being sold deadweight.

The AHDB also reports that deadweight supplies may be tightening. Its figures show liveweight throughputs are back 19.8% on the year for the four weeks from 12 May. And slaughter figures for May (8,500-9,000 head) are down on April’s weekly totals of just over 10,000 head.

Gisburn’s cull throughputs are decreasing as TB restrictions start to affect cattle trading in Lancashire. Cull cows met a flying trade on Thursday (31 May), including an astonishing bid of £1,600.60 for a trade-topping continental cow, with 59 culls averaging £854 overall.

“It’s the trade there for the lean cows that is astonishing,” dairy auctioneer Fred Spurgeon says.

“We would expect to see nearer 100 cows a week really, so numbers are down. About 20 mart regulars are currently under TB restriction.”

Mr Spurgeon says increasing TB restrictions in northern England is limiting the number going live. “At £25 to test an animal, you’re not going to test a cull cow – you can send it deadweight instead.”

Barbers throughputs are also 50-80 head down on the year at Market Drayton. This is helping trade hit some big prices – sucklers have topped at 190p/kg and dairy culls hit 160p/kg recently (4 June).

Auctioneer and partner Mark Jones has seen numbers drop over the past six or seven years from highs of 600-650 to 200-250 since red markets started, with 124 reported last week.

He says there is less interest in buying feeding cows, with good prices leading to cows being cashed and culled earlier.

“One issue is that for the larger dairies a fortnightly mart isn’t often enough if they are under TB restrictions, so they opt to sell deadweight instead,” says Mr Jones. “There have been a few vendors who have been tempted back to the mart with the trade as good as it is for all types of cows, although some have been lost for good, it seems.”

Fodder shortages forced people to sell cows in south-west Scotland earlier in the year, leaving supplies tight, prices high and a very firm outlook for the rest of the summer.

This is according to Harry Begg of C and D Auction Marts, who is regularly seeing leaner cull cows over 100p/kg and generally over 90p/kg.

Throughputs through January to April were up to 80-120 head a week, but are now down to 50 head, which is reflective of typical summer throughputs.

“I see no reason why the price will drop at all. I think cow numbers will remain tight for the rest of the summer.”