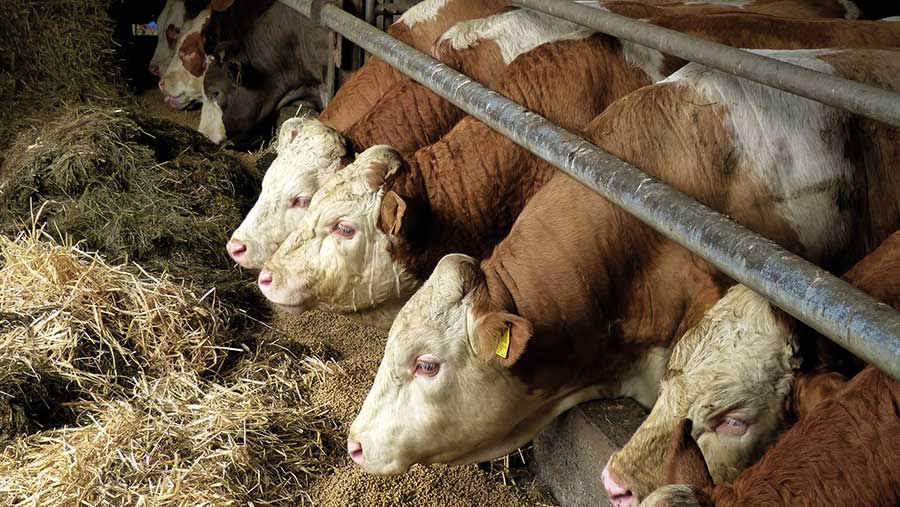 Prime cattle averages were pressured at the start of the week, following tightening Covid-19 restrictions across large swathes of the North and Midlands.

Much of northern England is now on the high alert level and Liverpool is on the very high level, which has limited socialising and forced the closure of pubs across Merseyside.

Bridgnorth, Carlisle, Leek and Northallerton were among the centres to see averages back on the week.

Some of this is seasonal pressure, as grazing cattle are sold – some a touch prematurely – before this year’s straw and winter costs start to eat into margins.

John Uffold at McCartneys said the best suckler-bred bulls were back 7-8p/kg on the week at Ludlow on Monday (12 October), with Friesians back 4-5p/kg, albeit from high levels.

Butcher demand soared during lockdown and then the “Eat out to help out” scheme boosted wholesaler and restaurant demand.

However, Mr Uffold said local Covid-19 restrictions in the North had impacted trade at Ludlow this week and it was anyone’s guess how the markets would continue to play out during the pandemic.

He said: “If restrictions tighten again, will we be back in the position we were before – who knows? There will be winners and losers in the meat trade this year.

“Cattle should always be sold when they are fit, but it pays to be in front of them, rather than behind, because if trade drops you can get hit twice – on price and also because you’ve fed them longer.”

Trade has dropped back slightly at Darlington in recent weeks, where the new out-of-town Humbleton Park is drawing more cattle.

Speaking last week, auctioneer Paul Gentry said good-quality U-grade heifers have hit 250-280p/kg and good bullocks have been up to 268p/kg and £1,870.

He said he feared the “January blues” could be very blue next year, with the potential of being very challenging for job markets and consumer pockets.

“I suspect prices will remain firm until Christmas. Firms will be putting orders down soon. There might just be enough furlough money, loans etc to get people to the end of the year.”

12.4% – How much higher UK beef spend was for the 12 weeks ending 6 September, according to AHDB.

5.5% – How much higher UK clean cattle and bull slaughter was up on the year for the 12 weeks from July to October

2.2kg – How much lighter average steer weights were in August at 358.2kg, according to Defra