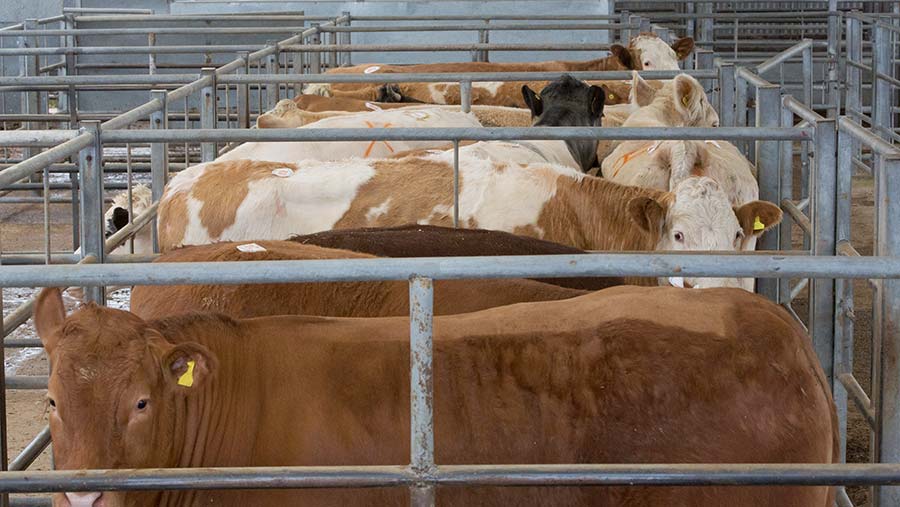 As temperatures cool and household beef demand increases, marts are reporting a turn in fortunes in the prime beef market.

Trade took a five- to six-week dip in the heat of July and early August after abattoirs cut 15p/kg off deadweight contracts, seeing values plummet from 371.8p/kg in late June to a bottom of 355.2p/kg six weeks later. The same sort of price drop was seen in the live rings.

Mid-August liveweight averages had already recovered for heifers to about 213p/kg for the weeks ending 11 and 18 August, while steers and bulls had recovered by 50-70% .

Trade has recovered at Market Drayton after a summer of “doom and gloom”, and Bernie Hutchinson, managing director at Barbers Auctions, has seen a rally in prices.

“The good trade we saw back in the spring has returned after cattle lost up to 15p-20p/kg through July and early August,” he told Farmers Weekly.

He said a mix of factors had combined to drag prime beef prices down, ranging from school holidays and hot weather limiting demand, to poor grass quality and lack of grazing leading to under-finished cattle.

A period of very limited demand looks to be over at Darlington, according to head auctioneer Andrew Armstrong.

He said the best bulls lost 15p/kg during the worst of the summer lull, but with the new school year starting across the UK, demand is heating up again.

“That’s a drop of £150 a head on strong bulls,” he explained. “Clean cattle were also hit, with a lot of buyers that would have usually bought 20 head, only stretching to buying 10.

“When the summer weather hits us, people say the BBQs will get going, but you don’t have a BBQ day after day – it’s once or twice a month, and generally the younger people, while the over-60s buy ham for salads and such like.”