A bumper turnout of cattle and sheep buoyed numbers to record levels at the 161st Great Yorkshire Show this week (9-11 July).

An entry of 1,246 cattle and 2,597 sheep produced an excellent event at Harrogate, ensuring showgoers were entertained, despite a late cancellation of all pig classes over the weekend.

The “difficult decision” to scrub this year’s Harrogate pig event, which includes the prestigious National Pig Association Pig of the Year competition, followed a suspected case of swine dysentery in a pig at the Royal Norfolk Show.

Laboratory testing returned negative results, with both industry and breeders stressing that the Yorkshire Agricultural Society made the right decision in taking the cautious approach.

Among the tens of thousands of visitors were Prince Andrew and Yorkshire farmer and Defra secretary Robert Goodwill, who both visited the showground on Thursday.

A fiercely competed supreme beef championship climaxed with a momentous win for the Heathbrow Simmental herd on Wednesday.

Heathbrow Important was tapped out by judge Peter Donger of the Seawell Charolais herd, Towcester, Northamptonshire, who noted the animal’s “tremendous growth and character”. 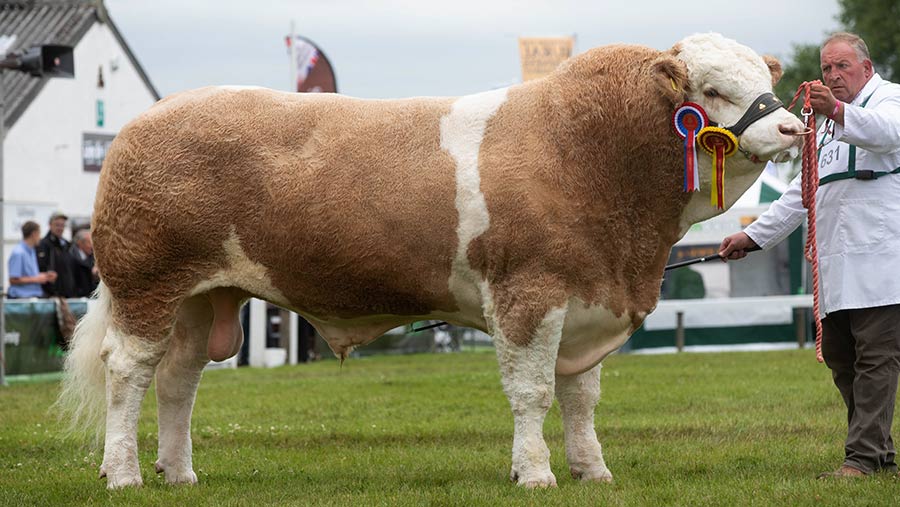 Mr Donger said the animal had excellent locomotion, adding that he was not too extreme and a great example of the breed.

Important is by senior stock bull Heathbrow Grand Slam and is out of the Celtic Comet daughter, Heathbrow Sarah’s Elegance.

He was shown by Paul Walker and Brenda Hyde for breeders David and Lesley Sapsed, Hitchin, Hertfordshire.

During the show, the Sapsed’s revealed that Important had recently been sold to the Blackford herd of Anne Macpherson, Croy, Inverness, for an undisclosed fee, and will be shown at next year’s Royal Highland Show under his new ownership.

Back home in Hertfordshire, the Sapseds have a 40-cow herd and have been developing commercial polled cattle genetics since 1998.

This success is the second time in as many years the breed has claimed the prestigious championship.

In 2017, the Popes herd of Jimmy and Vicky Wood, Dutton, Preston, won the red ticket with a cow-and-calf outfit.

The interbreed reserve ticket was snapped up by Foulness Ultra from the Mawer family, Woodall Spa, Lincolnshire, who returned to Harrogate to claim the Lincoln Red breed championship for a consecutive year. 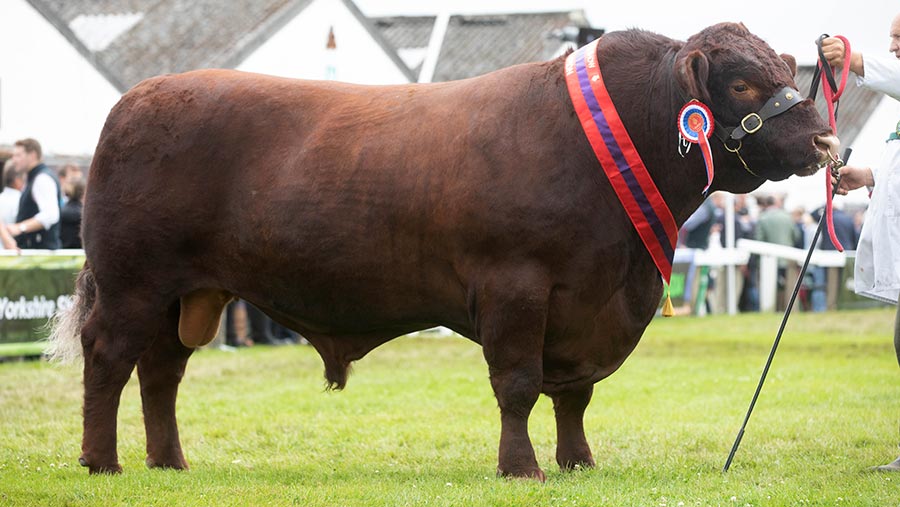 Ultra continues a rich vein of form this summer, adding to breed championships wins at the Royal Norfolk Show and the Lincolnshire Show.

Bred by Chris Page, Brough, East Yorkshire, Ultra is by St Fort Rolex and is now up for private sale after being used across the 18-head pedigree herd of the Mawers near Lincoln.

The rise of the Dutch Spotted breed made a ground-breaking step in the sheep rings on Wednesday, when judge Roderick Runciman of Allanshaws Farm, Galashiels, tapped out a Dutch Spotted female as his interbreed champion.

Complimenting the powerful two-crop ewe, Mr Runciman said his winner had “great length and a great top and offered correctness and character”. 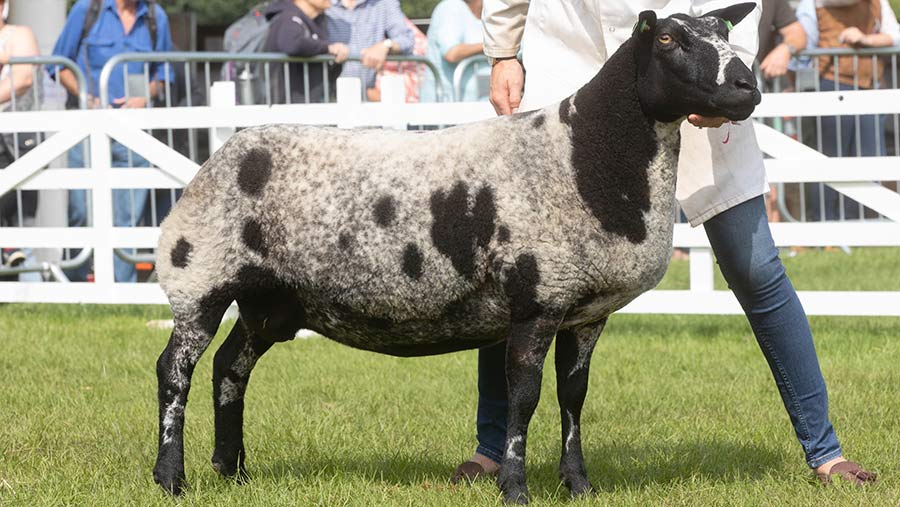 Classed as “any other breed” at the show last year, the Dutch Spotted breed has come a long way, said winning exhibitor Ali Jackson, who co-owns 10 pedigree ewes under the Tiptop prefix with Kevin Watret near Annan, Dumfries and Galloway.

The breed was given nine separate classes at this year’s show, during which the Tiptop flock thoroughly impressed.

The supreme champion, called Tiptop Hannah, is by an imported tup and ewe from the Netherlands and has never been shown before.

Hannah has had two lambs, which have both been retained into the flock.

She will be kept for breeding and might make an appearance at the Royal Welsh Show later this month.

In reserve was a ewe lamb shown by Jeff Aiken from Procters Farms, Slaidburn, Lancashire. 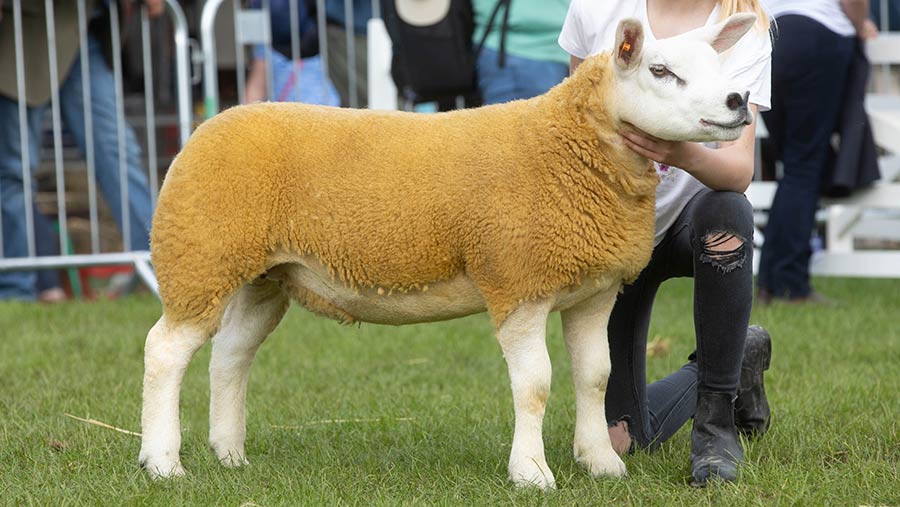 The Procters team plans on calling the red ticket winner Cinderella and may put the February-born lamb into a flushing programme in 2020.

She was bought by Procters Farms at the Solway and Tyne Texel Club sale at Borderway last year for 70,000gns in a two-way share.

A packed ringside saw a phenomenally milky Jersey beat a strong shortlist to take the interbreed rosette as Yorkshire-bred cows shone on day two of the show. 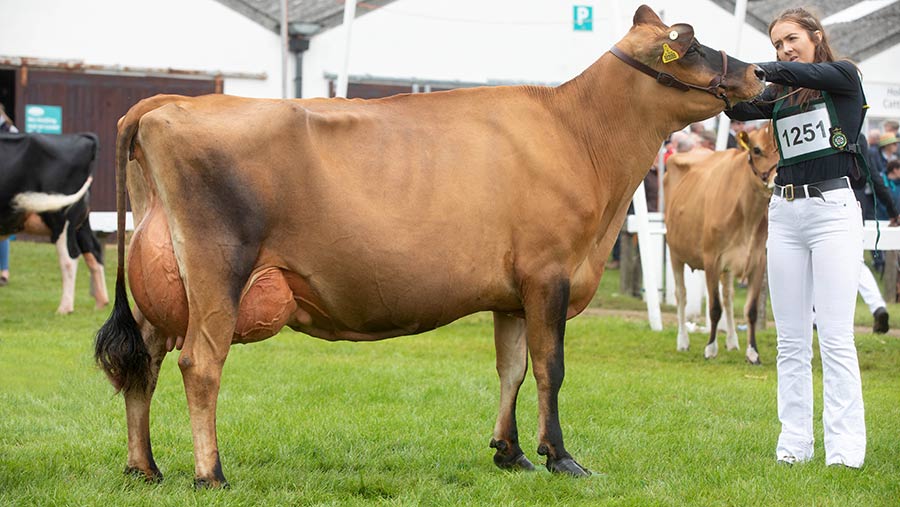 The win secured the interbreed crown for the first time in 20 years for the Saxbys and now the team is eyeing up the 2020 Borderway Dairy Expo.

The Cash cow family goes back to a cow Richard’s father bought in 1979 and has resulted in some highly productive cows and the second interbreed win for the herd, with the other coming 20 years ago.

Cash 89 gave more than 9,000kg in her second lactation at over 5.6% fat and 3.7% protein and was awarded reserve junior cow at Agriscot last year.

Due to calve in October, she peaked at 35 litres/day and is predicted to yield 7,000 litres in her third lactation. 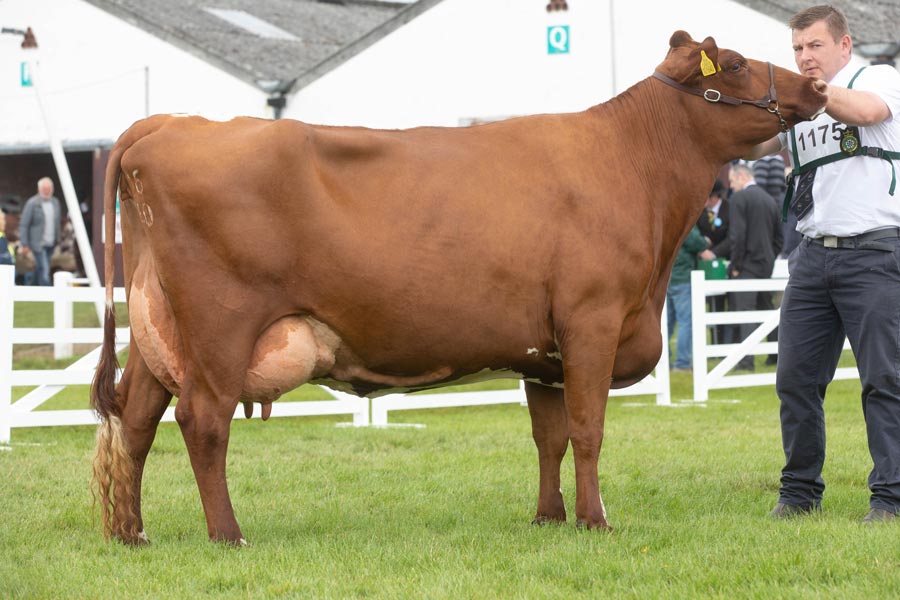 This stylish third calver is giving 46kg daily at 5% butterfat and 3.5% protein at six weeks in milk back home at the 140-cow mixed herd of Shorthorns and Holsteins.