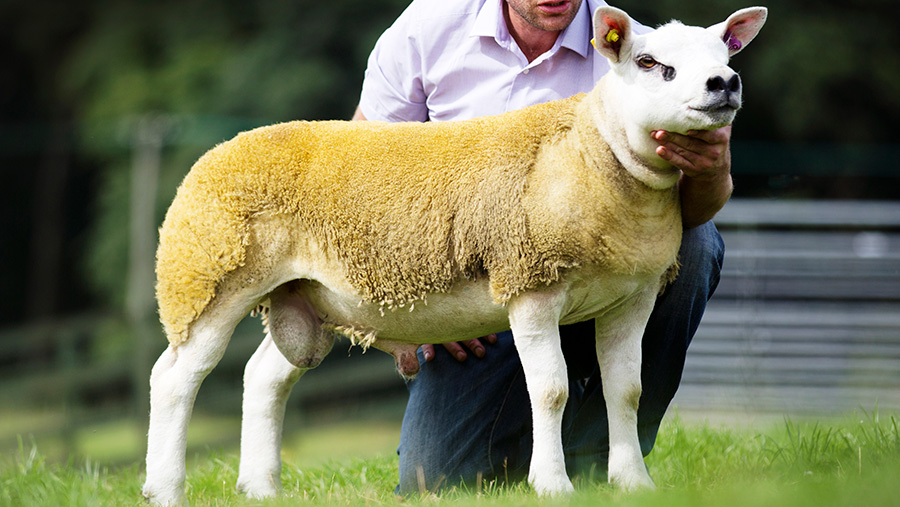 He was bought in a half share by Procters Farm and Messrs Boden and Davies for their Procters and Sportsmans flocks, respectively.

Late in the day, Brian Buchan, Fraserburgh, Aberdeenshire, enjoyed a flying trade for his pen from the Clinterty flock, taking calls of 60,000gns and 52,000gns and selling four to level at £30,988.

Topping the pen was Clinterty Yuga Khan, a Tophill Wall St son out of a dam by Ettrick Smasher. 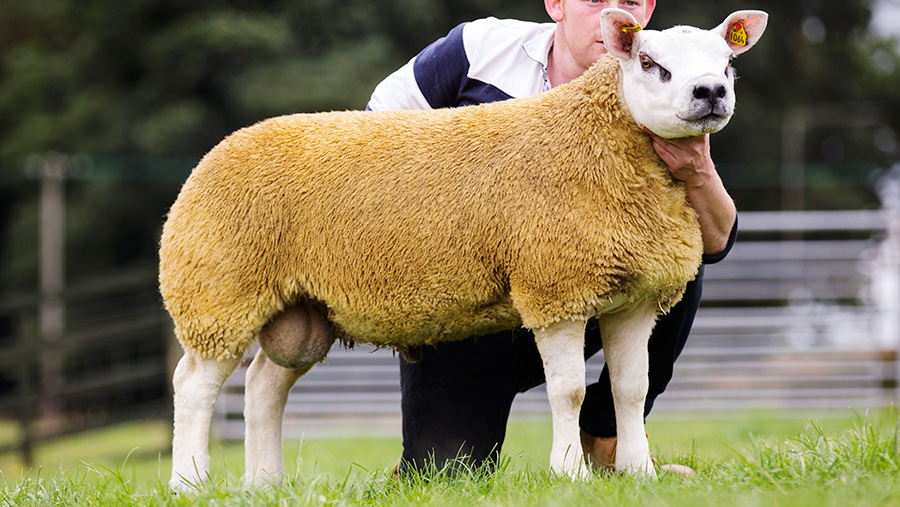 Following him at 52,000gns was Clinterty Yogi Bear.

He is another by Tophill Wall St and is it out of a dam by Clinterty Par One.

He carries an index of 347 and was knocked down to Charlie Boden for the Sportsmans flock. 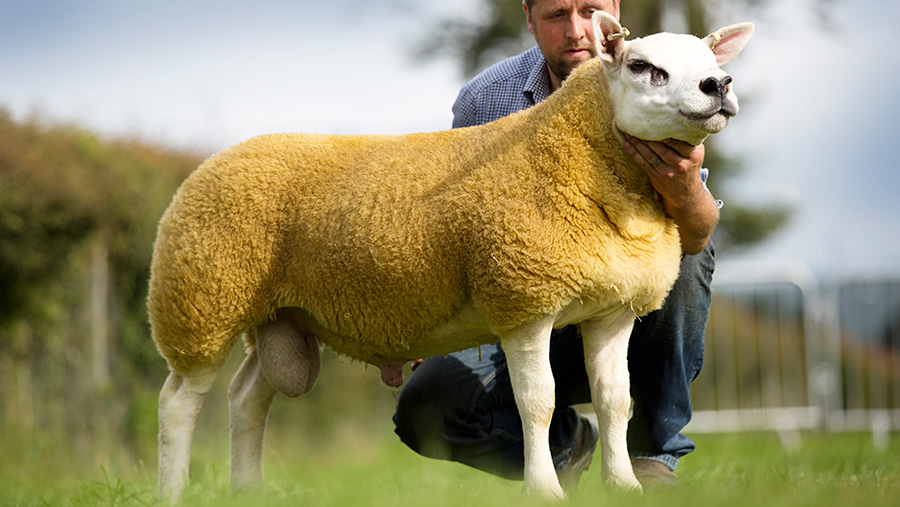 The Strathbogie pen from Jim Innes, Huntly, Aberdeenshire, realised a top price of 42,000gns and averaged £15,411 for seven sold.

Leading the pen was Strathbogie Your Tupped, a Glenside Wild Boy son out of a dam by Strathbogie Untouchable.

He sold in a two-way split to Keith, Alan and Roy Campbell, Cowal, and Bruce Renwick, Castlecairn. 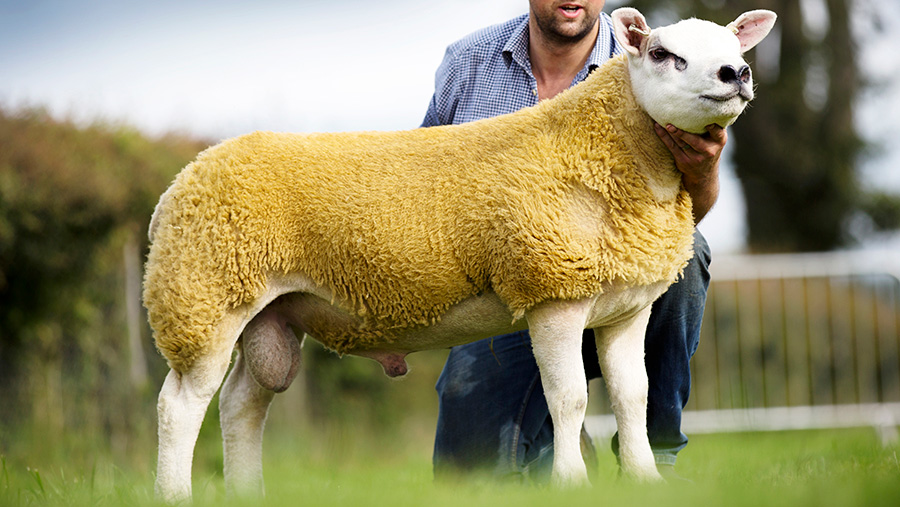 At 35,000gns from the same pen was Strathbogie Ya Belter, a son of Millar’s Windbrook which stood second at the Highland.

He is out of a dam by Glenside Razzle Dazzle, which is sister to the 24,000gns Strathbogie Smoky Blue.

He was bought by Procters Farm, Procters, and Will Davis, Usk Vale.

A 32,000gns bid then followed for Arkle YingYang from George Wilkinson and family, Wigton, Cumbria.

This son of Brackenridge Underdog is out of a dam by Cambwell Rob Roy and sold with an index of 305.

Selling at 24,000gns was Midlock Yorkie from the Wight family, Biggar, Lanarkshire.

This one is by Deveronvale Warrior out of a dam by Teiglum Thunder and sold to Messrs Orr, Halbeath, and Wilkinson, Arkle.

Then making 20,000gns was another from the Arkle pen, Arkle You Bet, a Halbeath VIP son out of a dam by Finevalley Triple Crown.

This lamb sold with an index of 234 and was bought by Jim Innes for the Strathbogie flock, Aberdeenshire.

At the same money was Knap Yeah Ram from Robert Cockburn, Errol, Lanarkshire.

This son of Tamnamoney Ultimate is out of a dam by Baltier Rascal I which was also dam of the 145,000gns Knap Vicious Sid.

A 16,000gns bid followed that, with this money paid for Sportsmans You’re a Winner from the Boden and Davies, Stockport, Cheshire.

This son of Strathbogie Whiplash is out of a dam by the previous Lanark champion Cairnam Talisman and sold to Northern Irish breeder John Leitch for the Cornmore flock with an index of 285.

Then making 15,000gns was Knock Yardsman from Albert and George Howie, Peterhead, Aberdeenshire. This son of Tophill Wall St is out of a dam by Sportmans Supreme and sold with an index of 330 to Andrew Neilson, Brackenridge, the Clark family, Garngour and Robert and William Fleming, Mossknowe.

A little below that at 14,000gns was Claybury Yosemite from the Draper family, Shrewsbury, Shropshire. This son of Stainton Vantage II is out of a dam by Clinterty Samba I and sold with an index of 384 to Messrs Campbell, Cowal, with a third share taken by David Houghton, Tophill.

At 13,000gns was Milnbank Younique from Robbie Wilson, Turriff, Aberdeenshire, with this Glenside Willy Nilly son being out of a dam by the 60,000gns Teiglum Tornado.

Following along at 12,000gns was another of the Strathbogie lambs, Strathbogie Yolo, a Glenside Wild Boy son out of a dam by Scholars Twenty Twelve and bought in a six-way split between Archie Hamilton, Smyllum, N Woodmass, Harene, R Roddan, Dashwell, G Pyman, Thacka, A Mawson, Midcombe and D Jarman, Stow beck

Another 12,000gns call followed for Knap Yorkie, a lamb sired by Tamnamoney Ultimate and out of the same Baltier Rascal dam as the 20,000gns Knap Yeah Ram and the 145,000gns Knap Viscious Sid. He found a new home with Messrs Galloway, Clantibuies and James Hair, Drumbreddan.

Just shy of that at 11,000gns was Strathbogie Yabba Dabba Doo, another by Wild Boy and out of a Strathbogie Terminator daughter.

Buying this one were Messrs McLaughan, Greene and Docherty.