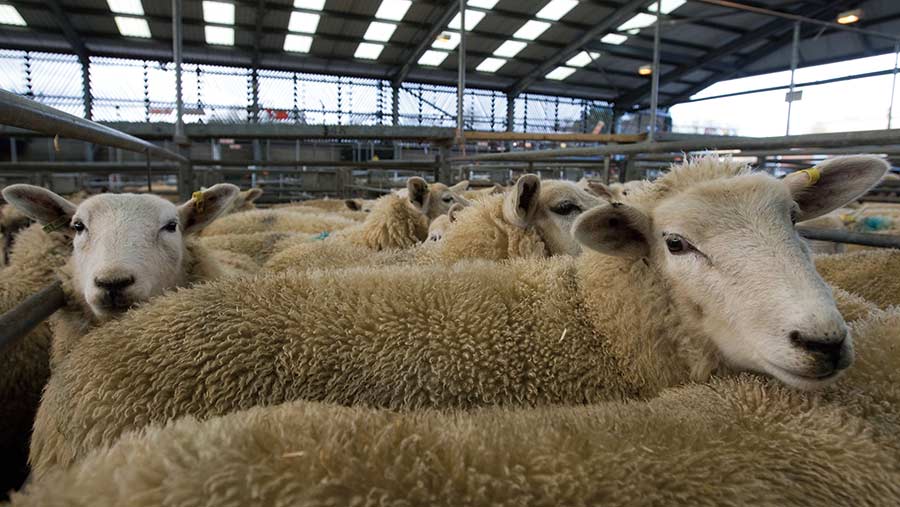 Wetter weather and a mild autumn have combined to provide ample late grazing for store lamb buyers and some good root crops on which to finish stock, which has helped support prices.

Shorter-keep lambs that will turn around quickly are at times £1-£2 back on the year, while longer-term lambs are £4 back or more.

Meanwhile, the phenomenal trade of earlier this season is still fresh in the memory. However, auctioneers admit you would need a crystal ball to see if lambs will average over 300p/kg again for weeks at a time.

Ashford’s store lamb numbers have already amounted to 60,000-head this year, up 10% on the year as more lambs have been sold as store rather than prime.

Elwyn Davies, auctioneer at Hobbs Parker, says trade is generally back £3 a head on the year, but that the best stores have held their value well, generally only £1 to £2 a head back on the year and some on par.

“Longer-term store lambs have suffered due to the uncertainty of long-term keep and dairy farmers being forced to cut later cuts of silage,” he told Farmers Weekly. “These longer-keep lambs have been £4 a head back.”

Luke Holmes, sheep auctioneer for United Auctions, said a firm store lamb trade has meant export-weight lambs (38-42kg) have been making more money in the store than the prime ring.

“This has maybe changed over the last week as there’s more export interest now, but we have had 40kg lambs in the prime ring at £62 and lambs from the same farm topping at £67 and averaging £62 in the store ring,” said Mr Holmes.

The arrival of farm payments and a much-improved forage situation has helped demand for store lambs across the region, he added.

“This time people have drilled more stubble turnips and rapes as feeding options. As it has got wetter through the past month, we’ve seen more store lambs come forward.”

John Wharton, livestock manager and auctioneer at Mitchells, said trade is at 140-150p/kg for plainer types, while heavier and stronger lambs are 160-180p/kg.

Hardy, hill-bred store lambs of all breeds will continue to come through the ring until the end of the year, he added.

“Selling store lambs was hard work earlier on when buyers were concerned about fodder, but generally trade will be £1-£2 a head back on last year.”