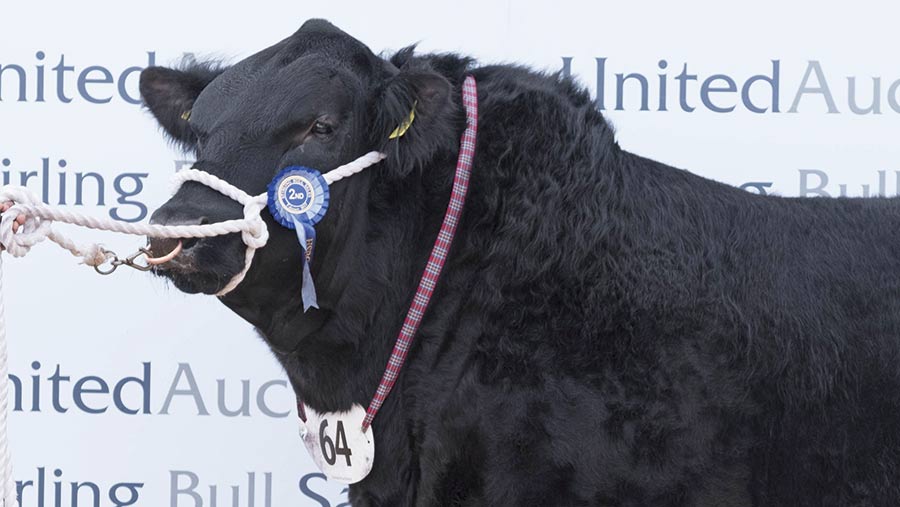 A solid commercial demand for Aberdeen Angus bulls saw the breed realise a top price of 18,000gns on Monday with a further seven bulls selling for 10,000gns or more and some 117 bulls sold averaging £5,735 with a clearance rate of 76%.

Sale leader at 18,000gns was the second-placed Balmachie Jack Eric R206 from Carnoustie-based John Lascelles. A son of the home-bred Balmachie Ben Vorlich L105, out of the Rawburn Transformer daughter Balmachie Juana Erica J067. With a self-replacing index of +57 and a terminal sire index of +43, this one is now stock sire at the Rawburn herd of Messrs John Elliot, Roxburgh Mains, Kelso. 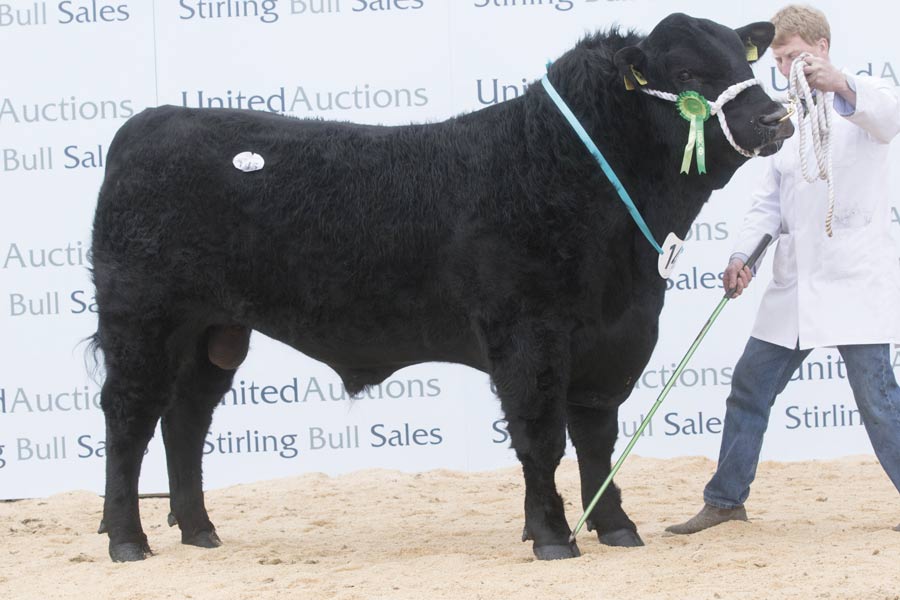 The Tilson family of the Borders-based Wedderlie herd then secured the second highest-priced bull on the day, paying 16,000gns for Blelack Pontius R599 (above) from Neil and Graeme Massie, Aberdeenshire. By Blelack Banjo Man N126, who is a son out of the 15,000gns Blelack Miss Bangle L613, is out of the Carrington Park Time On B7 daughter, Blelack Pride N114. He carries a milk figure of +20 and a self-replacing index of +59. 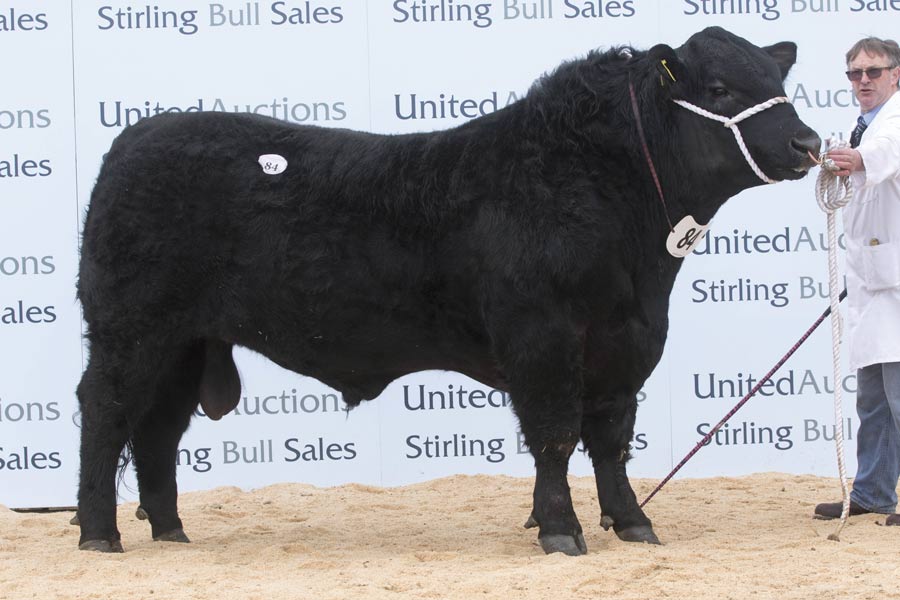 Two bulls then shared a 15,000gns price tag, the first being Gretnahouse Exocet R770 (above) from Alasdair Houston, Gretna Green. By Gretnahouse Blacksmith L500, he’s out of Gretnahouse Eliza L495, who carries Blelack breeding on both sides. He has a self-replacing index of +66 and terminal sire index of +54 and sold to Schivas Estate, Ellon, Aberdeenshire. 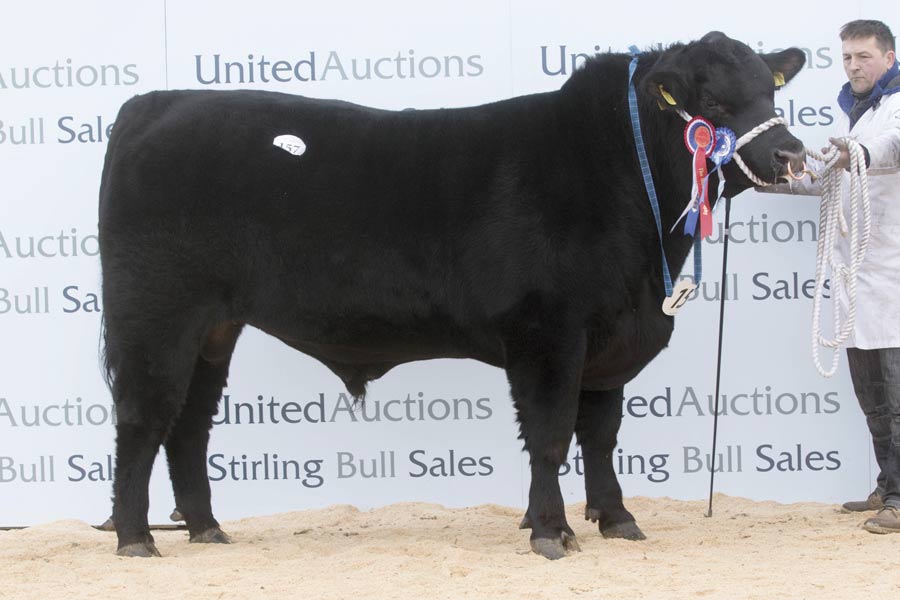 Also at this money was Alistair Clark and Sons, Cumnock, Ayrshire, with the second-placed Duncanziemere Judge R170 (above) , a son of the 2014 Royal Highland Show breed and interbreed champion Rawburn Jester Eric J034. This one is out of the Newcairnie Pastor Z006 daughter, Duncanziemere Jody D147, a 2006 Highland champion. He joins Andrew Hodge’s Rulesmains herd, Duns, Berwickshire.

The first of two bulls to sell for 13,000gns was Ewan Brewis’ reserve intermediate champion Eastfield Jockey R820, an Abberton Proud Nixen N297 son out of a home-bred Rawburn Edge J983 daughter. With a self-replacing index of +60, he headed south to Faversham, Kent, for John Coultrip’s Wingfield herd. 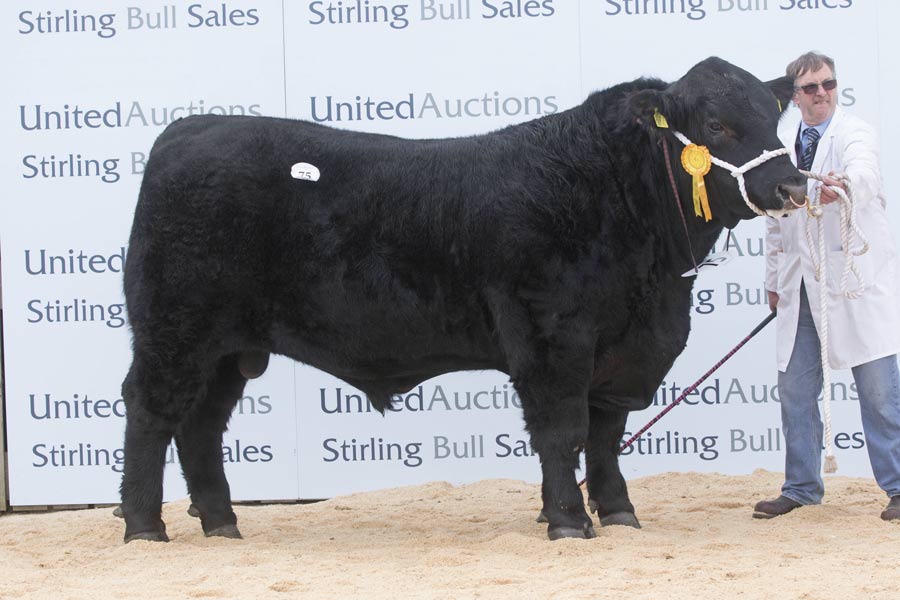 Also at 13,000gns was another from Alasdair Houston’s team in the form of Gretnahouse Black Ballboy R763 (above). This ET-bred Blelack Duke J262 son is out of the Netherallan Peter Pershore E052 daughter, Blelack Blackbird J131, making her full brother to Gretnahouse Blacksmith L500. This one will now be herd sire at Glympton Farms, Woodstock, Oxfordshire.

A further two bulls then shared a 10,000gns price tag, the first being the intermediate and overall champion from David Lucas. Cheeklaw Jake Eric R535, is a Cardona Proud Punch L752 son out of a home-bred Tweedside Jewgal Eric Z083 daughter. Securing this one were Albert and Jennifer De Cogan for their Mogeely herd, Cork, Republic of Ireland.

The other at 10,000gns was the youngest bull to sell on the day, Blelack Blue Jay R631, from the Massie family. By Blelack Lord Hampton M034, he’s out of a 9,000gns home-bred cow and daughter of a former Highland Show champion. This one found a new home with Angus Neish, Warminster, Wiltshire, for his Rodmead herd.

Headlining the female trade was John Elliot, Kelso, with a cow and calf outfit, which netted a combined 17,500gns. It was the calf part of this duo that drew the highest bid at 9,500gns for Rawburn Miss Essence S326. This April 2016-born calf is out Rawburn Miss Essence J050 who also sold at the sale for 8,000 and is by Rawburn Firebrand N687. She sold with a Terminal Sire Index of +43 and a self-replacing index of +53 to Brailes Livestock, Oxfordshire.

Her mother Rawburn Miss Essence J050 is described by Messrs Elliot as a “real superstar” of the herd “with great power and quality”. She is out of DMM Miss Essence 147H, who is regarded as one of the most impressive and influential cows in Canada and is a daughter of the breed legend Hoff Limited Edition. She sold in calf to Rawburn Boss Hogg to Hannah Heerema, Balavil Estate, Inverness.