Trade realised a high of 1,400gns at the dispersal of the Soutra Suffolk flock on behalf of Sandy and Grace Sutherland, New Channel Kirk, Berwickshire, last week (27 January).

The flock, which was established 31 years ago, was being dispersed while the stock were at the top of their game, Mr Sutherland told Farmers Weekly.

“I’m not getting any younger and have no-one to pass the flock on to, so wanted the stock to go while they were still looking good,” he said. 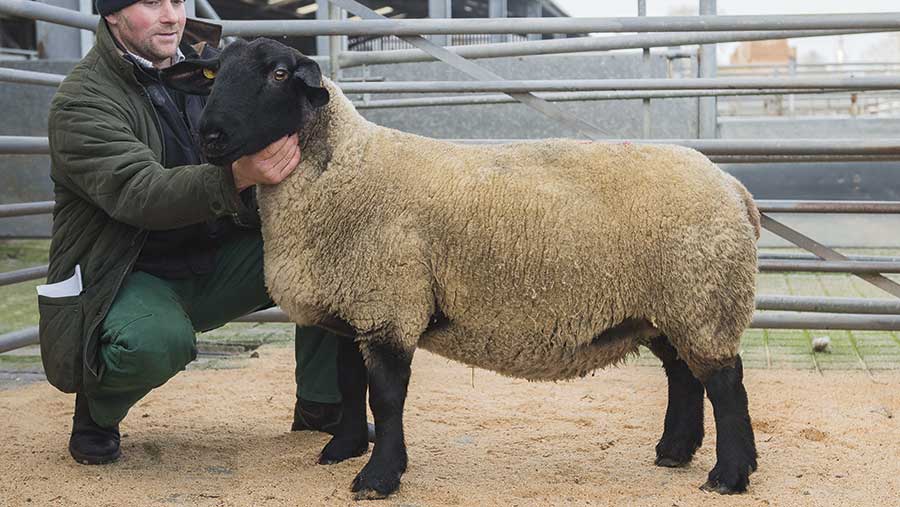 Sale leader at the Soutra dispersal at 1,400gns was a 2014 born Sitlow Surefire daughter. © Robert Smith

Mr Sutherland was pleased with trade, with an average of £451.74 for the 89 mostly female sheep on offer. Ram lambs will be offered for sale at Kelso in September.

Sale leader was a 2014-born Sitlow Surefire daughter out of a Templand Toledo-sired dam. Surefire is a Muiresk McKelvey son and is renowned for breeding milky females and has produced sons to £2,200.

With an eight-week weight EBV of 5.27kg this Surefire daughter sold having been served to the £4,000 Drimmie Upstart son Roseden Gold Medal, who is described as being a “clean sheep, with good carcass and hair”. Buying this one was IHG Warden, Skelfhill Farm, Hawick, Roxburghshire.

Next in the money at 1,100gns was a Strathisla Sign Off-sired gimmer, again out of a Templand Toledo-sired dam.

This much-admired gimmer won reserved champion at Kelso Show last year and was sold having been served to Roseden Gold Medal. Buyer was Highfield Farming, The Knock, Duns, Berwickshire.

At 100gns less was a 2013-born ewe by Langside Langat and out of a Capielaw Smasher-sired dam.

She sold having also been served to Medal and with an eight-week weight EBV of 3.48kg to JB Pate and Sons, Toxside Farm, Gorebridge, Mid Lothian.

Also selling at 1,000gns was another Surefire daughter out of a Capielaw Smasher-sired dam.

With an eight-week weight EBV of 4.15kg she sold having been served with Medal to CR Fawcett, Wellhouse Farm, Harbottle, Rothbury, Northumberland.