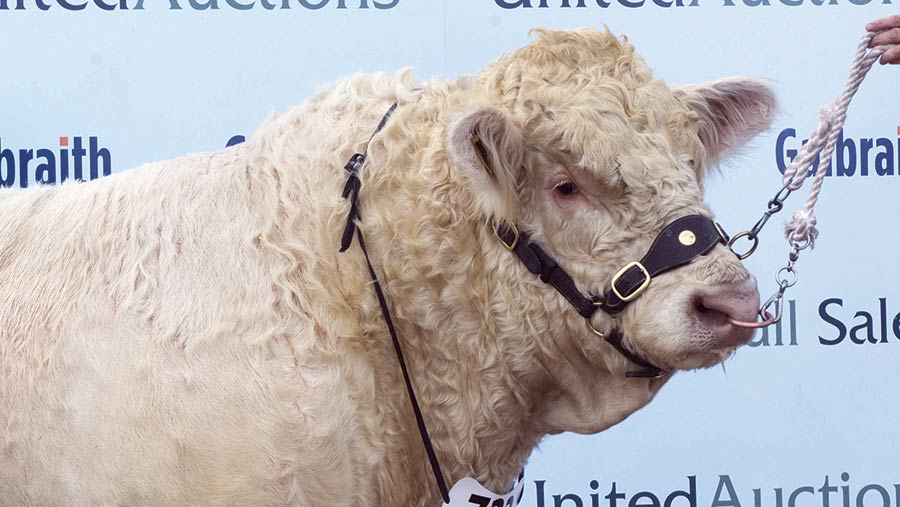 Charolais bulls met a flying trade at Stirling on Tuesday (24 October), with clearance rates increasing by 19% on the year at 82% and prices peaking at 12,000gns twice.

He is sired by the 20,000gn Royal Welsh supreme champion and Highland Show beef breeder continental champion Maerdy Grenadier, and goes back on the home-bred dams side to the French-bred Victorieux. Buyers were Colin and Fiona Wight of Biggar, Lanarkshire.

See also: 5 of the most expensive UK bulls

The second to hit the 12,000gn mark was the youngest and final lot of the sale, the 15-month-old Sportsmans Monarch, bred and exhibited by Boden and Davies Ltd, Mellor, Cheshire.

This is the son of the 70,000gn Royal Welsh supreme champion, Barnsford Ferny and Sportsmans Honeydew. The successful bidder was John McGrath in Dromore, Co Tyrone. 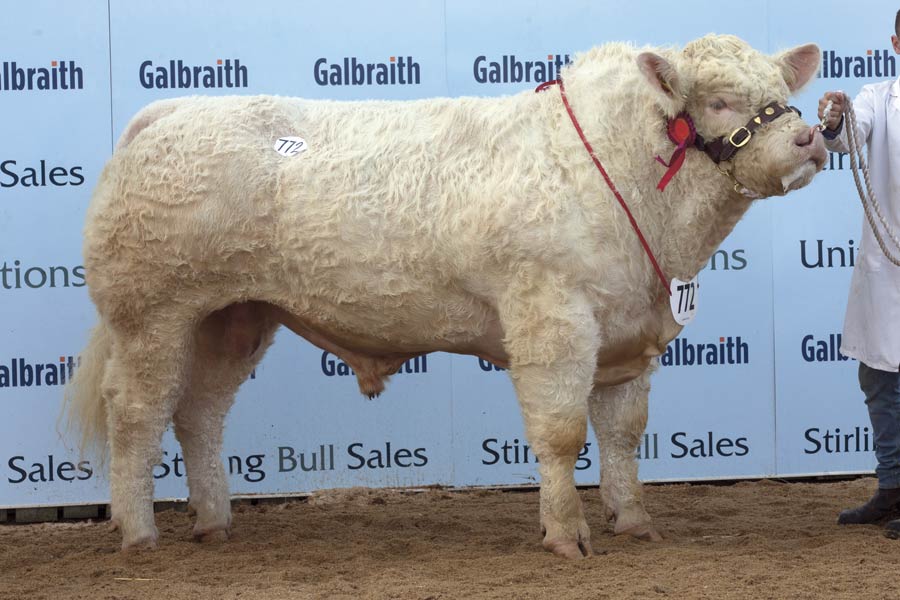 Next in the trade stakes at 11,500gns was a blue ticket winner from WK and P Drysdale, Blairgowrie, Perthshire, who caught the eye of Ian and Diane Goldie, Cummertrees, Dumfriesshire.

The May 2016-born, 12,000gn Caylers Gladiator-sired Glenericht Majestic is bred out of the Royal Highland Show class winner Glenericht Gem. 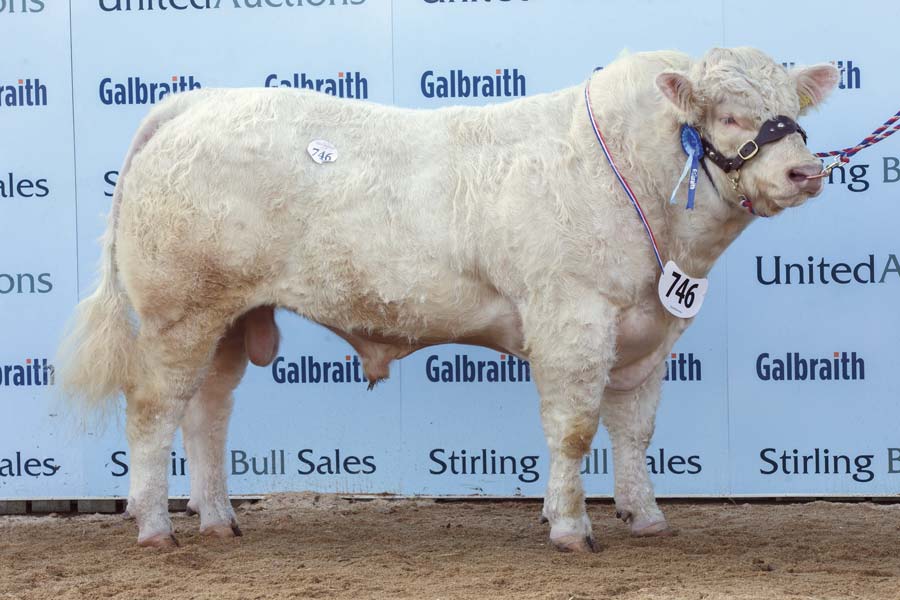 The Drysdales were also awarded the senior championship in the pre-sale show and secured a bid of 8,500gns for their 20-month-old champion, Glenericht Matrix.

Sired by Glenericht Hollywood and out of the 12,000gn Coolnaslee Adversary-sired dam, Elrick Fern, he caught the eye of A McArthur, Balfron Station, Glasgow.

Matador, whose dam, Tweeddale Icemaiden, is by Blelack Digger, was the highest-priced offering from Jonathan and Jane Watson, Berwick Upon Tweed, Northumberland, who went on to sell a total of six averaging £6,877.50. 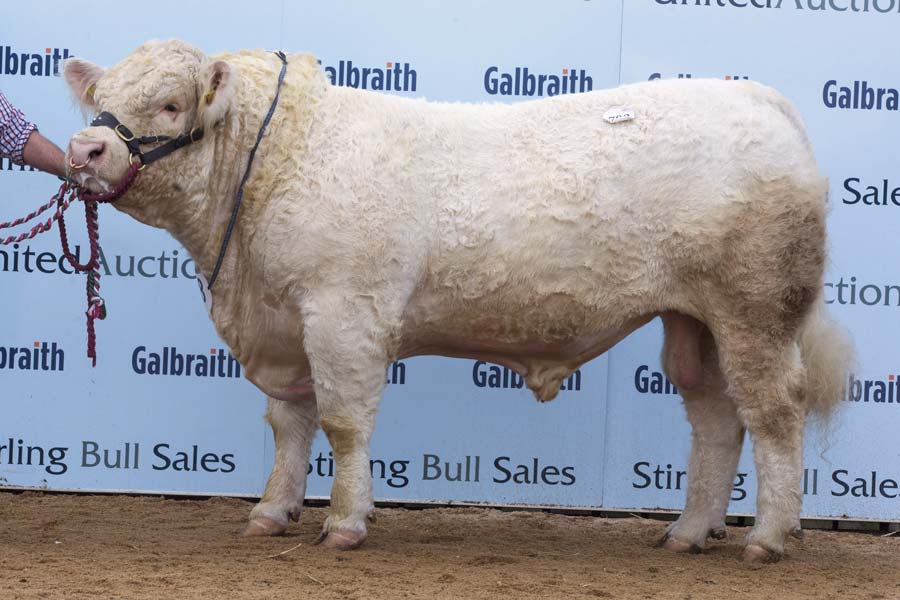 The Watsons’ next-highest-priced lot, at 9,000gns, was Tweeddale Maximum, who had placed second in his class the previous day.

Again, born in April 2016 and sired by Blelack Blackberet, but this time out of the 30,000gn Dingle Hofmeister daughter Graywood Ebony, he headed down to Shropshire with Evans, Corfield and Son, Ashford Carbonell, Ludlow.

Three bulls then went under the hammer at 10,000gns. The first, Kersknowe Matador, was offered by James Jeffrey, Kelso, Roxburghshire.

This 18-month-old son of Inverlochy Fencer, out of Kersknowe Dido, was purchased by Ellis Mutch, Forglen, Banff. 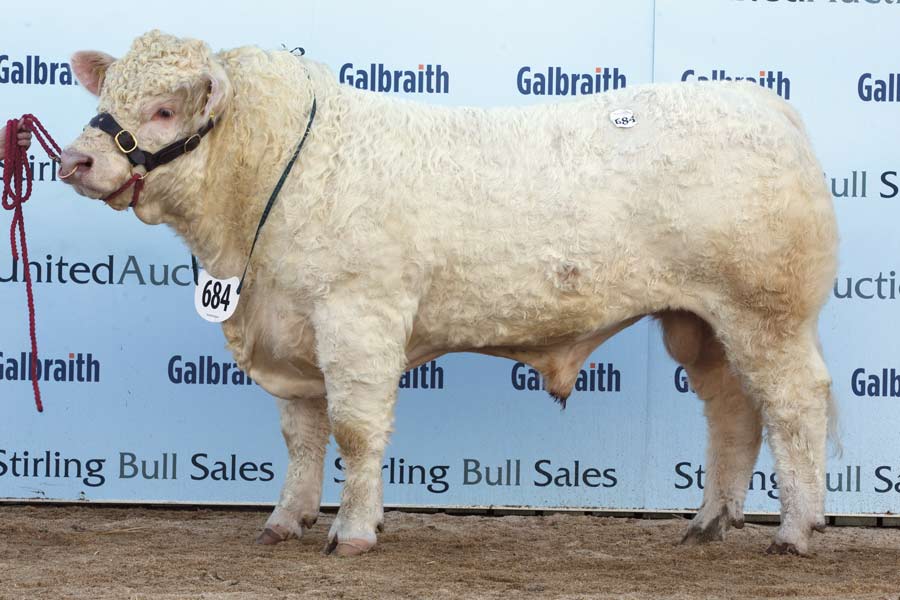 Matching the 10,000gn price-tag and selling to J Irvine and Son, Tomintoul, Banffshire, was the 17-month-old red ticket winner Balthayock Maestro, from David and Nick Walter, Perth, Perthshire, who sold a total of six which averaged £6,650.

Maestro is by the 20,000gn Royal Welsh supreme champion Maerdy Grenadier, while the dam is Balthayock Glory ET, a cow by the 26,000gn Balbithan Vespasian.

Jack Nicoll Farms Ltd, Blairgowrie, Perthshire, were the next to offer a 10,000gn bull. The May 2016-born Mornity Mushroom, who is sired by the 14,000gn Westcarse Houdini and out of Mornity Icicle, was snapped up by James Anderson and Son, Lauder, Berwickshire.

Goldies Lullaby, who is sired by the 15,000gn Gretnahouse Heman and out of Goldies Bonney, who goes back to Thrunton Trademark, sold to DP Daniel, Launceston, Cornwall, who went on to purchase three more including another lot from Mr Goldie.

Goldies Model ET, a 17-month-old who had been tapped out second in her class in the pre-sale show, is a daughter of the 34,000gn Perth supreme champion Goldies Uppermost ET and the 10,000gn Perth intermediate champion Killadeas Legend-sired Goldies Champagne and secured a bid of 3,500gns.