Two breed records were set in the Beef Shorthorn ring at Stirling on Sunday 21 February – a record bull price and a record sale average.

Trade rocketed more than £1,300 on the year to average over £6,100, with 54 lots meeting a 79% clearance. The Meonside herd of Tom Bradley-Farmer, Parkgate, Dumfriesshire, sold Meonside Nidavellir for a record-breaking 27,000gns.

The 20-month-old dark roan sire is by the 10,000gns Stirling champion Willingham Kensington. 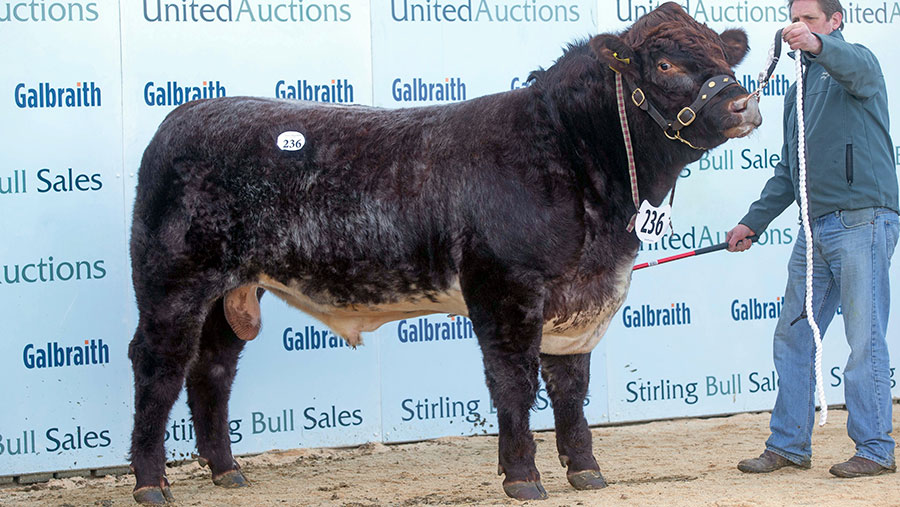 Nidavellir is out of the Fearn Wyvis daughter, Ballylinney Lily 25, and is a half-brother to the herd’s stock bull, Meonside Hong Kong. He is in the breed’s top 5%, with a terminal index of +45, a self-replacing index of +50 and a maternal index of +27.

Next at 14,000gns was Muiresk Northern Dancer from Stuart Mair and Sons, Turriff, Aberdeenshire. He was knocked down to AJ and A Barrett, Kings Lynn, Norfolk.

This 22-month-old is by the Glenisla Zinzan son Alvie Galaxy and out of the Meonhill Charlie Chaplin daughter Millerston Augusta Julie. He boasts a terminal sire index of +36 and a self-replacing index of +47. 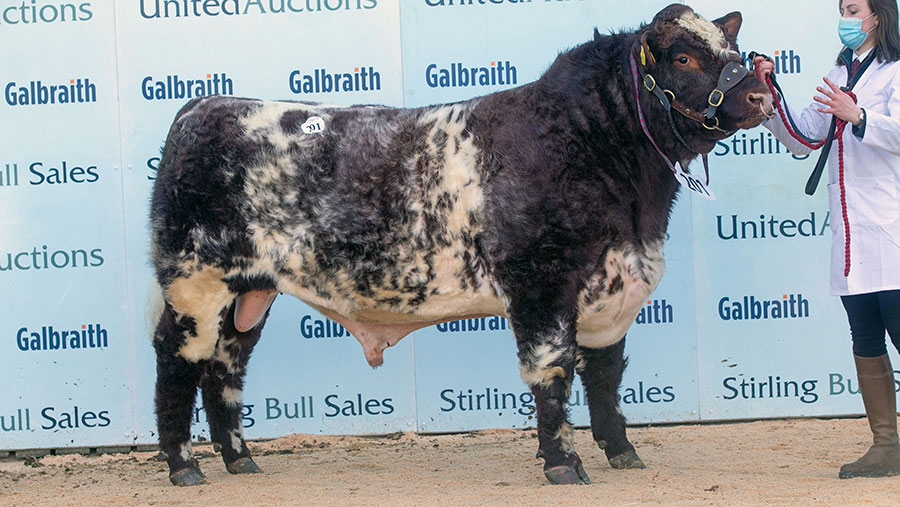 The Bradley-Farmers were then back in the money at 12,000gns. Meonside Nosty sold to JF Irving and Son, Yarrow, Selkirkshire. He is another Kensington son and is also out of a Fearn Wyvis daughter, this time Lilly 12.

Two lots then made 10,000gns. The first was Glenisla Nobleman from Major JPO Gibb, Blairgowrie, Perthshire. He was bought by GL Riby, Bridlington, East Yorkshire. 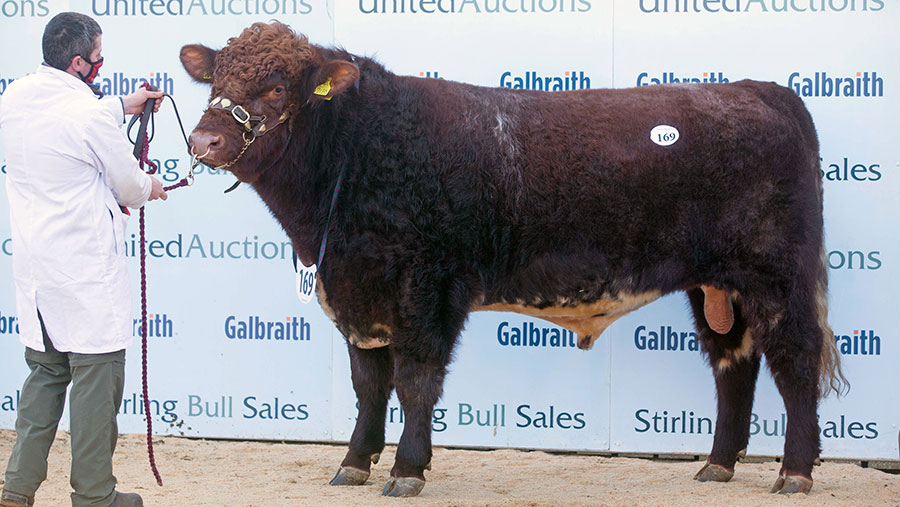 Nobleman is by the Weebollabolla Theodore T85 son, Broughton Park Thunder, and is out of the Belmore Fuel Injected daughter, Glenisla Foxglove Tansy Z461. He boasts a terminal sire and maternal index of +30.

Nearco is by the 15,000gns Balnabroich Kermit and out of Chapelton Duchess. The 23-month-old has a terminal index or +41 and a maternal index of +20. 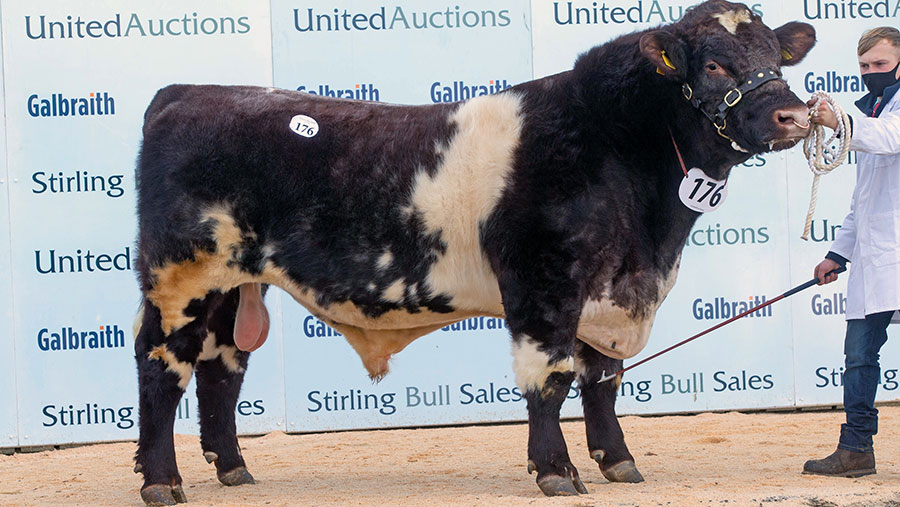 The bidding was then back with JPO Gibb with Glenisla Nitro. He was knocked for 9,500gns to William Young and Son, Kirkcaldy, Fife. He is by Millerston Jamboree and out of Glenisla Waterloo Namoi Z427. 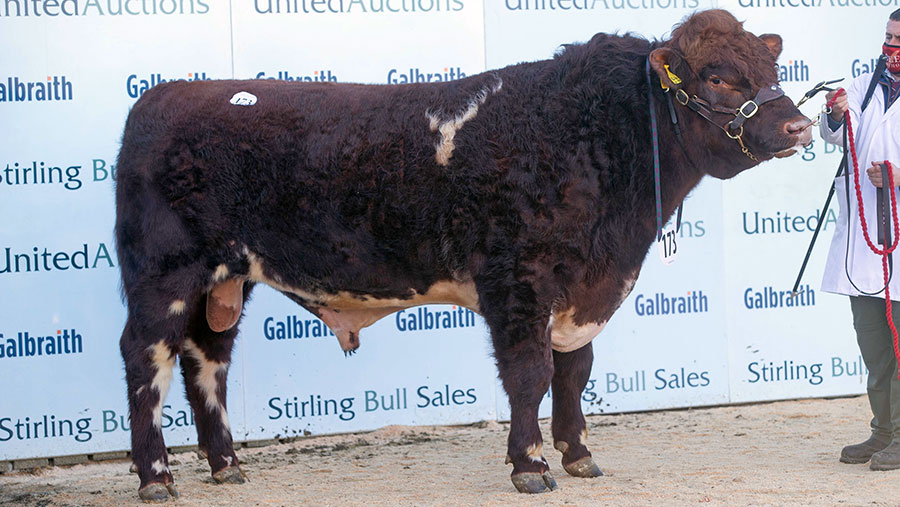 Next at 9,000gns was Podehole Nordic from Harry Horrell, Peterborough, Camridgeshire. Nordic is a son by the Dingo of Upsall son Klondyke of Upsall and out of the Trojan of Craigeassie dam Podehole Madeline Choice.

He went home with James Porter, Lisburn, County Antrim, and has a self-replacing index of +45.

Another 9,000gns bid also secured Glenariff Nearctic from the Barretts. He sold to C Williamson, Kingussie, Inverness-shire. He is by Glenisla Ghillie and out of a Chapelton Tyco daughter.

Jack and Grace Ramsay, of Mauchline, Ayrshire, saw a 7,500gns bid from A and C Farms, Rutland, Leicestershire, for their three-year-old in-calf roan by 6,000gns Glenrinnes Goliath. Millerston Iranian Marilyn is out of the Millerston Einstein daughter Millerston Irania Harriet.

She sold in-calf to Cairnsmore Landmark, due to calve in May.

The Meonside herd was back in the money with a Kensington daughter at 6,500gns. Meonside Broadhooks Nella sold to T Russell, Stanford in the Vale, Oxfordshire.

The Millerston herd offered six more heifers in-calf to Landmark, which averaged £3,915. Next best at 4,500gns was a Meonhill Charlie Chaplin daughter, which sold to MA Lawrie, Kirriemuir, Angus.