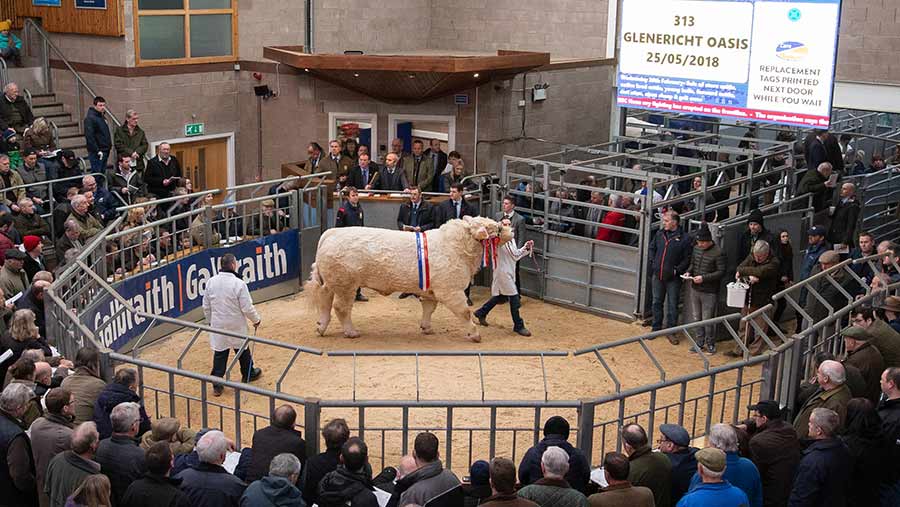 Demand for Charolais bulls once again proved to be strong in the Charolais ring at Stirling on Tuesday (18 February) as two 25,000gns calls lifted averages over £500 on the year.

The breed boasted the largest entry and highest average at the spring bull sales, with 15 of the 117 sires hitting the five-figure mark and 63% making 5,000gns and above.

Society chief executive officer Peter Phythian said the pleasing trade was a reflection of how well Charolais-sire cattle were selling in the store ring.

“We are just starting to see buyers looking at the myostatin status when purchasing bulls and are being more conscientious of how they select them,” said Mr Phythian.

He said turnover, quick finishing and carbon efficiency were on the minds of buyers.

See also: Stirling: Salers averages up £1,301 on the year

However, both overall entries and clearance rates were back on the 2019 sale and a smaller heifer entry hit an average £572 less on the year. 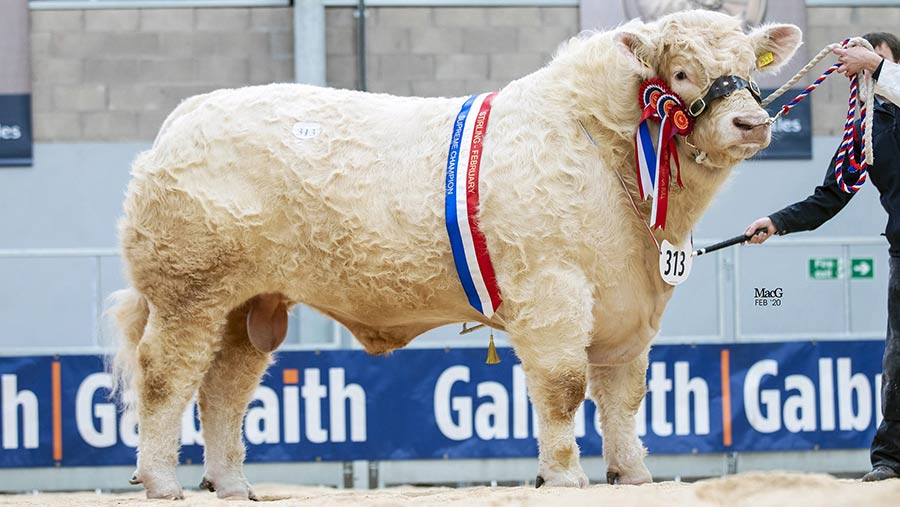 At a joint top call of 25,000gns was the May 2018-born Glenericht Oasis from WK and P Drysdale, Blairgowrie, Perthshire. He sold to Danny Sawrij, Kedzlie Farm, Lauderdale, after taking the senior and supreme champion tickets.

Oasis is by the 12,000gns Caylers Gladiator and out of Glenericht Gem, a daughter of the 16,000gns Clyth Diplomat.

Equal to this was Elrick Outlaw, the day’s junior champion. He was from Michael Massie, Ellon, Aberdeenshire, who averaged £14,175 for his four bulls. 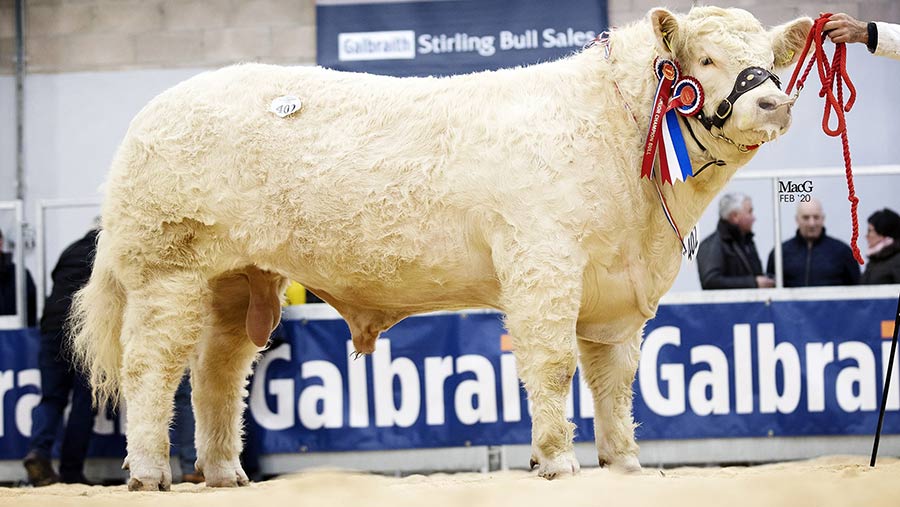 Boden and Davies, Mellor, Cheshire, took Outlaw home. This 17-month-old is a Maerdy Gouveneur son out of Elrick Malt dam Elrick Florida and goes back to the 11,000gns Maerdy Dublin.

Next at 15,000gns was another Gouveneur son from the Elrick herd, this time called Oxygen. He caught the eye of Jonathan Crawford, Maghera, Co Derry.

Oxygen is out of another Maerdy Dublin daughter called Elrick Isidore. 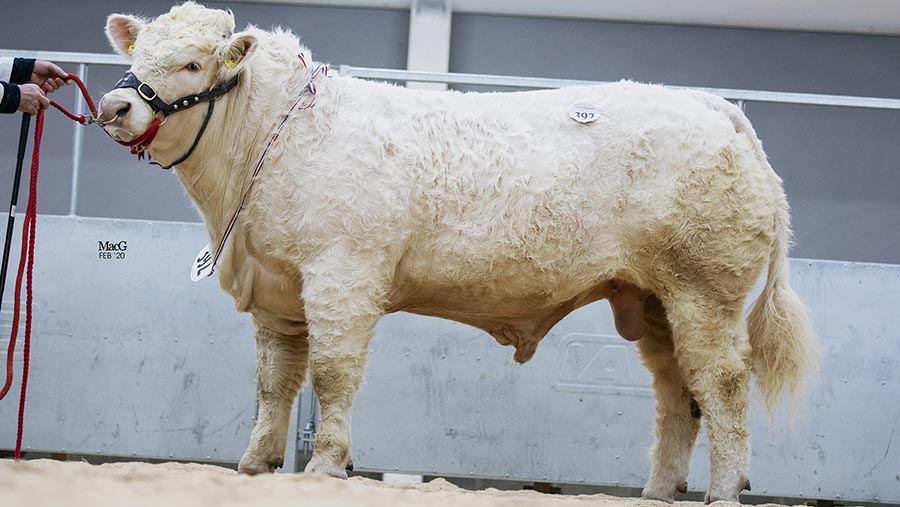 Also at 15,000gns was Elgin Oliver from Roy and Matthew Milne, Lhanbryde, Morayshire. He sold to John and Jenny Rix, Nayland, Essex.

The intermediate champion is bred from Woodpark Elgin and the Caylers Gladiator daughter Elgin Ianthe. He was one of five Elgin bulls to average over £8,700. 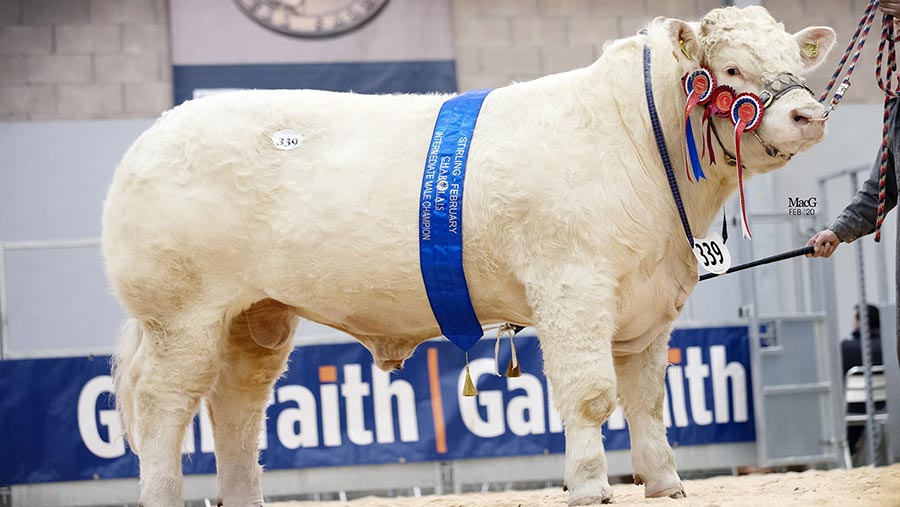 Osgood is out of Maerdy Honney, a daughter of the French-born Froufrours and he is by the 10,000gns Blelack Fabulous. 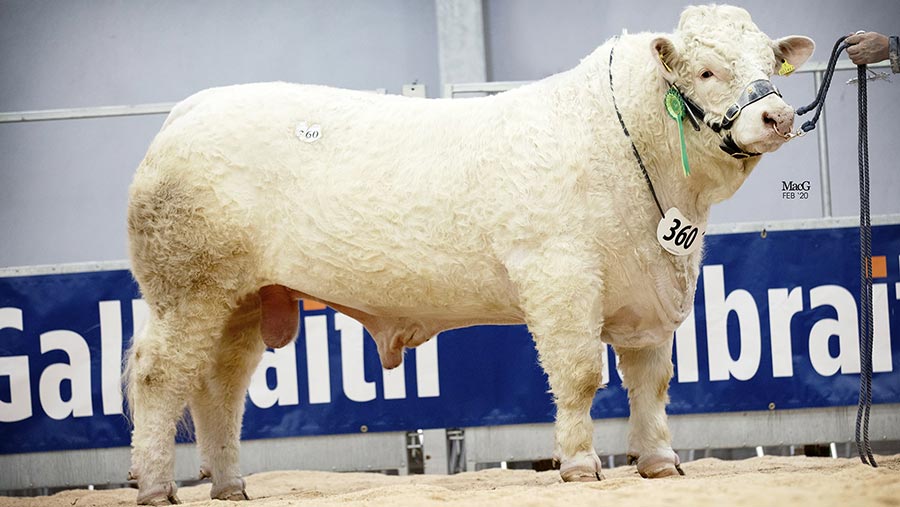 The first at this money was Burradon Olaf from Chris Curry, Thropton, Northumberland. He is by Irish bull Clenagh Lyle and out of the Puntabrava Federico daughter Burradon Jemma.

He caught the eye of J Morton and Son, Melrose, Roxburghshire.

Allanfauld Ozzy is by Allanfauld Lachie and out of Allanfauld Gaga, an Elgin Davinci son.

Next at 3,200gns was Thrunton Oriental from the JHC Campbell and Sons, Alnwick, Northumberland. She sold to David Dandie, Broxburn, West Lothian.

She is by the 28,000gns Maerdy Jerusalem and out of the Thrunton Gladiator-sired Thrunton Isabella.