Limousins attracted a solid trade at the Stirling bull sales this week (3-4 February), with two lots breaking the 10,000gns mark and a 13,500gns top price.

Judge Robert McNee praised the sale for having strength in length, locomotion, loin and good tops, with averages up £130 a head on the year.

Olympian is an April 2018-born son of the 12,000gns Goldies Lordoftherings and carries a beef value of LM+53, placing him in the top 1% of the breed for growth and performance. 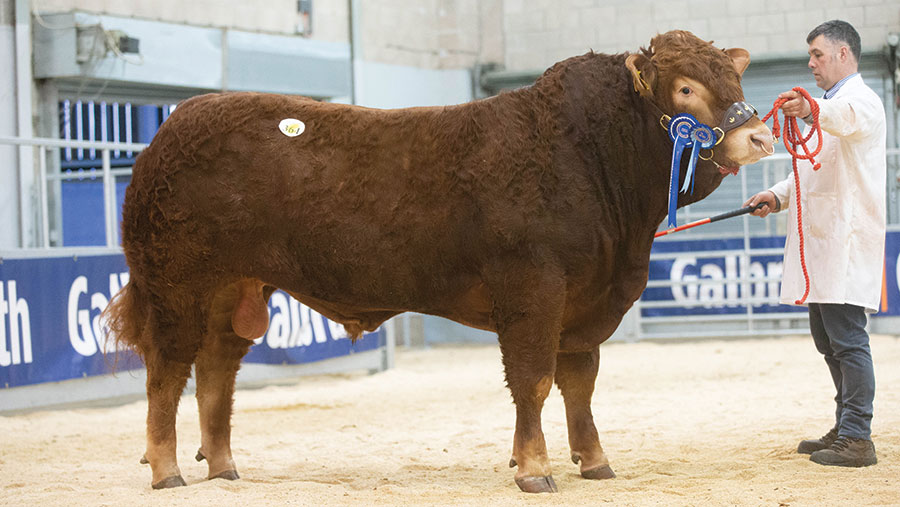 The top price capped a great day’s trading for the Dyke herd, with all seven of their bulls sold to average an impressive £7,455.

But they were pipped to the second-highest price by the 10,000gns reserve junior champion, Newhouse Oriental.

The black-coated bull was consigned by Messrs RM Adam & Son, Newhouse of Glamis, Glamis, Forfar, who sold all six of their bulls to gross £38,036. 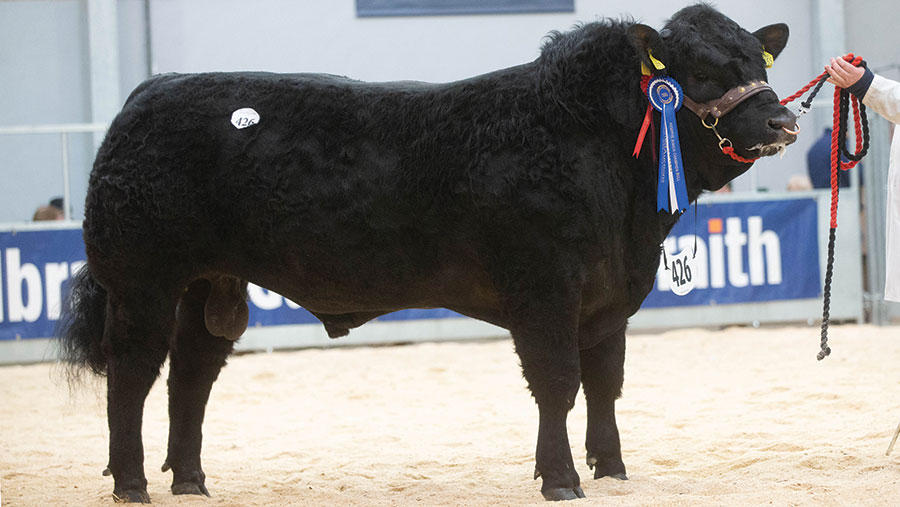 Oriental was born in July 2018 and is by Westhall Jammy, which sired the leading price bull at last year’s event (Westhall Norris 11,500gns), and is out of Newhouse Lazykay.

Another with an exceptional beef value (LM+52), Oriental was described as having tremendous length, top and depth of flesh, before he was knocked down to Cloquhat Farms, Wester Cloquhat, Bridge of Cally, Blairgowrie.

After that came three bulls at 9,000gns – two of which saw the good run from Donald MacGregor’s 50-cow Dyke herd continue.

The first of these was the supreme champion, Dyke Outlaw, born in April 2018 and weighing 1,090kg. 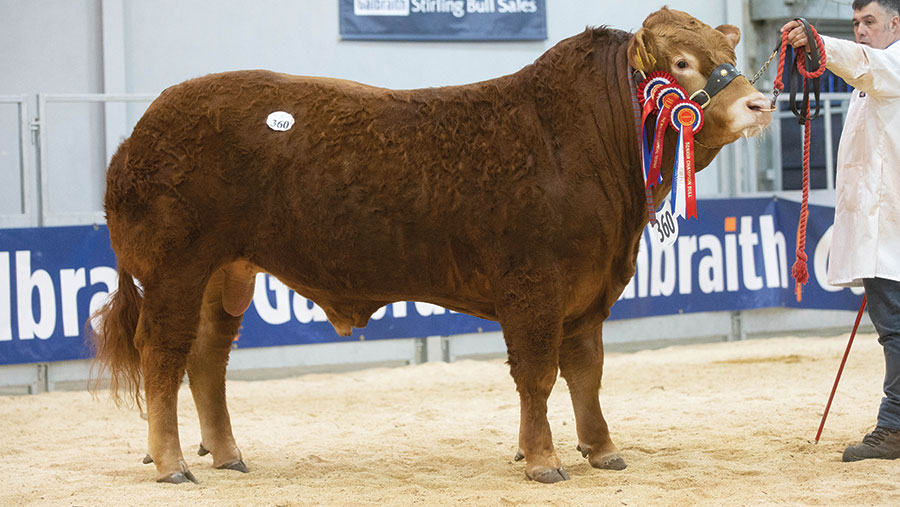 Out of the Goldies Comet daughter Dyke Jemma, he is sired by Netherhall Gilbert, and has sons to date averaging £7,000.

Another at 9,000gns was the fifth prize-winner Dyke Ovation (LM+56) which was picked out by Messrs Renwick, Corsebank, Sanquhar, Dumfries. 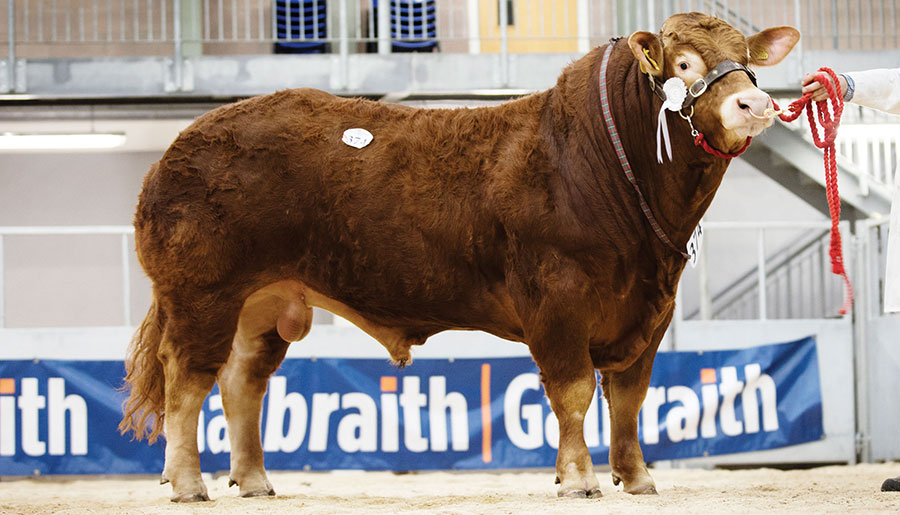 By the Goldies Fantastic son Goldies Lordoftherings, he is out of the Ryedale Paragon daughter Dyke Viva. 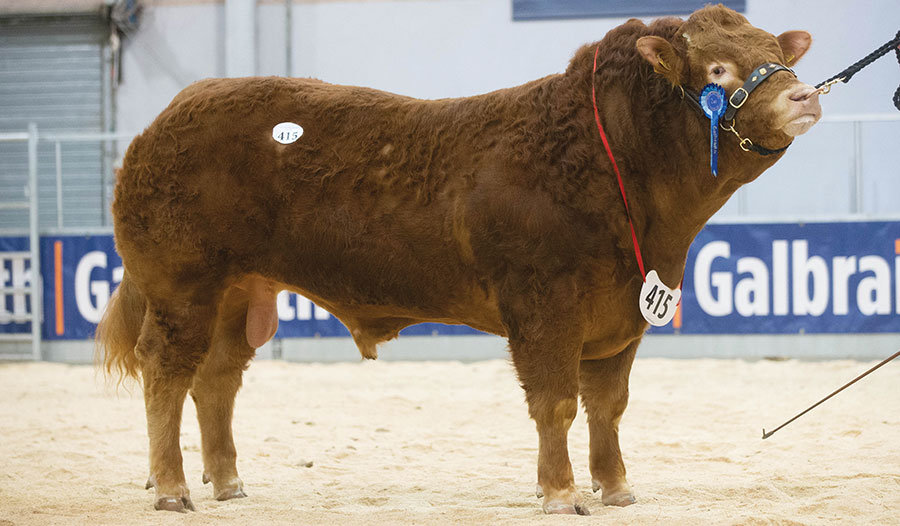 An AI son of the Irish-bred Elite Icecream, by Amperttaine Elgin, he is out of the Haltcliffe Vermount-sired dam, Ringway Fallon.

Coming in just under the 9,000gns mark was the red rosette-winning Goldies Orlando from Bruce Goldie, Townfoot, Mouswald, Dumfries.

By the Ampertaine Gigolo son Goldies Juggler, and out of the Goldies Terence-sired cow Goldies Dalmation, he sold for 8,500gns when knocked down to Huntlyhill Mains, Lanark.

Overland is by Burnbank Judge and out of the Sympa daughter Spittalton Harriet. He heads to Croy Cunningham, Gartness Farm, Balfron Glasgow.