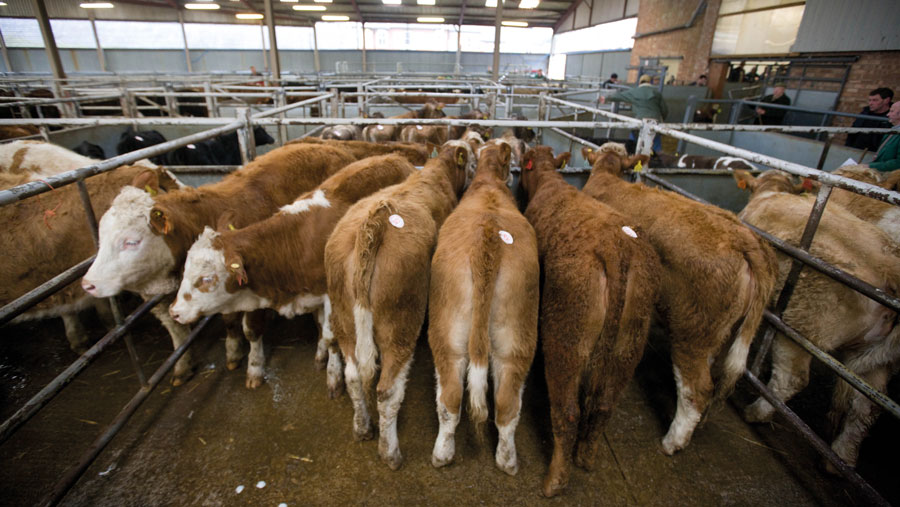 Store cattle vendors are taking advantage of a flying trade as finishers exercise bargaining power with processors during a period of tight cattle supply.

Numbers of cattle aged 12-30 months were 5% (81,900-head) back on the year in January, according to UK British Cattle Movement Service estimates.

Many in the industry are watching whether limited imports, lower numbers in the UK and Ireland and limited food service activity help swell commercial base prices to 400p/kg.

In response to tight supplies, imports are expected to lift this year. The AHDB has forecast a 4% rise in imports, based on more foodservice sector activity.

However, the levy board says this could be limited by tight Irish supplies. Ireland’s data shows an 8% drop in slaughter numbers for the first eight weeks of the year and almost 2% fewer prime cattle (12-24 months) at the start of the year compared to the year before.

Numbers of yarding cattle are a little tighter at Bakewell this spring, following a trend for earlier autumn marketing of cattle to avoid hefty winter straw bills.

“Stores are as dear as anybody can remember,” said Bagshaw’s Alastair Sneddon. “Some [farmers] are buying to turnout to grass, others to fill up yards.”

He said that summering cattle were in demand, adding that it was difficult to see sunshine and spring weather lifting cattle prices much further from their current elevated levels.

Ashford’s spring store cattle sales are reporting lower throughputs after last autumn’s sales saw numbers increase by about 2,200 head on the year to 7,200.

“We sold 40% more cattle in the autumn as many businesses sold earlier owing to high straw costs and limited forage,” said Ashford’s managing director, Elwyn Davies. “Unlike other parts of the country, this area remained dry all year – some say it was like 1976.”

Mr Davies said short-term cattle were scarce, with a strong trade reflecting the returns in the finished market and a lack of numbers nationally.

£90
How much dearer on the year the all-breed Quality Meat Scotland store steer average is for cattle aged 12-18 months, at an average of £1,079 so far this year

34.6%
Increase in national spend on beef steaks by Great British households on the year for the 12 weeks ending 24 January, according to Kantar

11.9m
How many kg of burgers and grill cuts were sold through retail in the 12 weeks ending 24 January, which was 26% more on the year