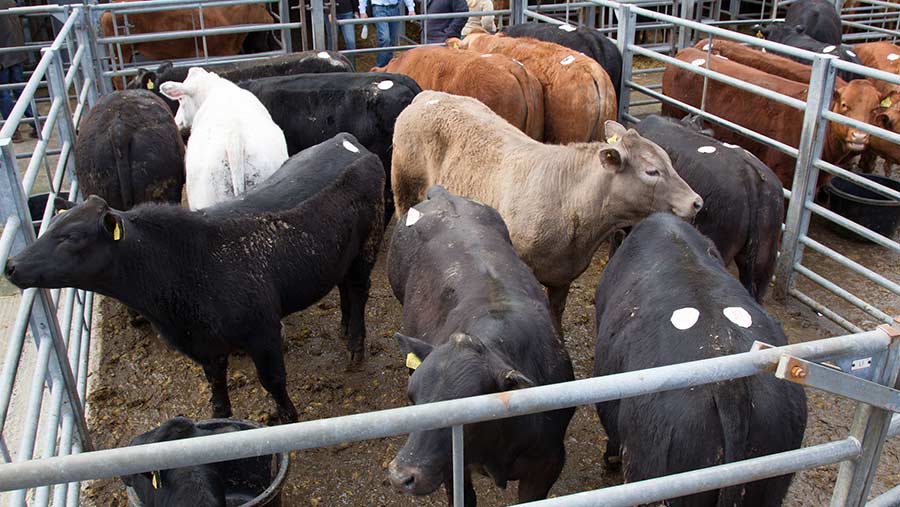 Store cattle prices have staged a muted autumn recovery nationally as grazing and forage stocks have started replenishing across some regions.

However, forage shortages and rising cereal prices (up 25% on the year) have left longer-keep stock and dairy-sired types at a discounted level, although special suckled calf sales have still seen continental calves at over 300p/kg, say auctioneers.

Ben Baggott, market manager for Barbers, says the high numbers of dairy stores they see at Market Drayton are £80-£100 a head less than earlier in the year.

Friesian stores have hovered around the 130-140p/kg in September and October, compared with a spring price of 150-160p/kg.

“It’s a buyer’s market for the longer-keep cattle and the yearling dairy stores,” he told Farmers Weekly.

He added that buyers were saying they would rather buy cattle £100-£150 a head dearer in the spring than have to feed them all winter, with forage being tight.

“Another trend we saw, although this looks over now, is more interest in bulls for cereal-based feeding, with silage being short.”

Monmouthshire’s throughputs have lifted 50% this month, with late October yardings up to 482 and 475.

And while there have been some steady prices, Monmouthshire Livestock Auctioneers director Lyndon Trumper said values seen for the strong, well-bred cattle are ‘very similar’ to last year’s solid trade.

“People using the right bulls are finding that high-quality, uniform bunches are keenly sought after,” said Mr Trumper. “They are easily traceable as well.”

He said prices dropped £50 to £100 a head in the store ring for three weeks in September, but good autumn weather has helped trade.

Prices have diverged into a ‘two-tier market’ across Britain and this is certainly the case at Thainstone, where John Angus has seen prices and confidence return to pre-drought levels this autumn.

“There are some people looking for the longer-keep cattle now,” said Mr Angus. “Perhaps the malting barley cheques are in and forage worries have subsided a little.”

He added: “We will be moving into the housed cattle now, so averages could lift a little into the coming weeks as cattle will have been fed. Any lift in prices won’t be down to trade I shouldn’t think, just quality.”