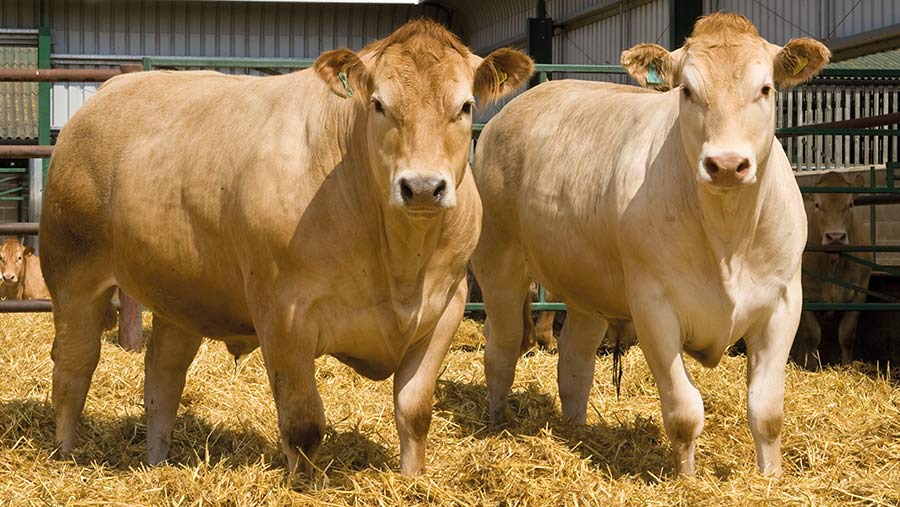 Defra’s June slaughter figures were back 6.8% on the year. Furthermore, prime markets have sold 5.8% fewer cattle this year to date.

Processors are having an even harder time securing cattle. AHDB’s deadweight survey shows that steer throughputs have been back 6.2%-14% each week since June.

Reports of staff shortages due to Covid-19 tightening beef supplies mean that, while grazing cattle are in demand due to plentiful grass, short-keep cattle prices are through the roof.

Finishers competed for just 53 store cattle at Ruthin on Thursday (23 July) as farmers rallied to get the harvest in across North Wales.

The entry of mostly forward cattle (18-22 months) were mainly dairy-bred animals, with all types meeting keen interest and some heifers bought for bulling.

Numbers, normally minimal in mid-July due to the Royal Welsh Show, are tipped to lift to 50-70 head a week, and then up to 250-300 head in the autumn, said Mr Lloyd.

British Blue cross animals for summer grazing saw the most resistance. Although sought after, Mr Lloyd said buyers find them harder to keep condition on and grow frame.

Stephen Williams, of Williams Associates, who sells cattle on a freelance basis at the market, said Blue cross dairy-bred bullocks had topped at £1,320 for an entry weighing 590kg at 23 months, and Friesian bullocks had made £1,000.

“Buyers will give £1,200 for R-grade bullocks all day long at 500kg – the same money for heifers too,” Mr Williams told Farmers Weekly.

He added that machinery, timber, wire and all other farm costs seemed to be rising weekly. “Everything is dearer and livestock prices must keep pace.”