Buyers travelled from as far afield as Orkney to Norfolk to attend the dispersal of the Carlhurlie Aberdeen-Angus herd on behalf of the executors of the late Rae Grieve, which took place at United Auctions, Stirling, last week (7 December).

Sale leader was the May 2014-born Carlhurlie Darcy P028. This Skaill Dido K309 daughter is out of a home bred Blelack Blackstock C737 daughter and sold PD’d in calf to the February Stirling champion the 24,000gns Tonley Evor P044.

Buyers here were Alistair and Graeme Fraser for their Idvies herd, Forfar, Angus. 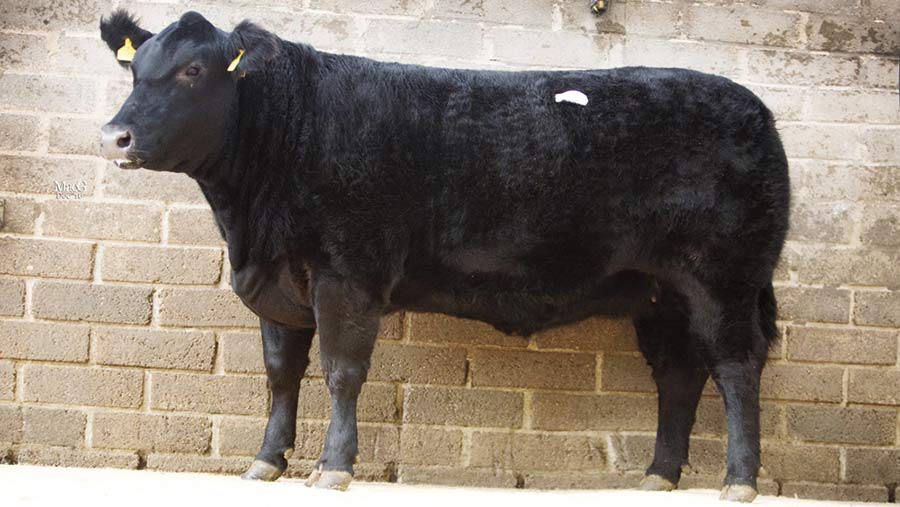 Leading the Carlhurlie dispersal at 11,5000 gns and selling to the Idvies herd was the maiden heifer, Carlhurlie Darcy P028

Next best was another in calf heifer, Carlhurlie Erstic P035. By Wedderlie Posse H565, she’s out of a Penguin Eldorado F254 daughter and sold again in calf to Tonley Evor P044 to S Raeburn, Letham, Angus.

Leading the maiden heifer offering at 7,000gns was the April 2015-born Carlhurlie Quintessa R081. Another by Dido, this one is yet again out of a Blackstock daughter and sold to J and I Wilson, Cupar, Fife.

Meanwhile, Shadwell Estate Co, Norfolk, paid 4,500gns for Carlhurlie Eon R096, who has similar breeding to the last being a Dido daughter.

Of the mature cows, outfits topped at 8,500gns with Donald Rankin of the Isle of Skye-based Kilmaluag herd paying 6500gns for Carlhurlie Elixir M889, a Penguin Eldorado F254 daughter out of a Blackstock dam and in calf to Balmachie Black Bard M135.

Her bull calf at foot by Dido then sold for 2,000gns to G Milne, Fife.

Of the individual heifer calves the top price of 3,200gns was paid by David Walker of the Galcantray herd, Nairn, for Carlhurlie Electress S113.

This one is by Black Bard and out of Carlhurlie Elenor N992, a Skaill Dido K309 daughter.

He’s by Balmachie Black Bear H050 and is out of The Moss Mr Eshton D409 daughter, Netherton Blackbird H489 and sold to Messrs Henderson for the Culrain herd.