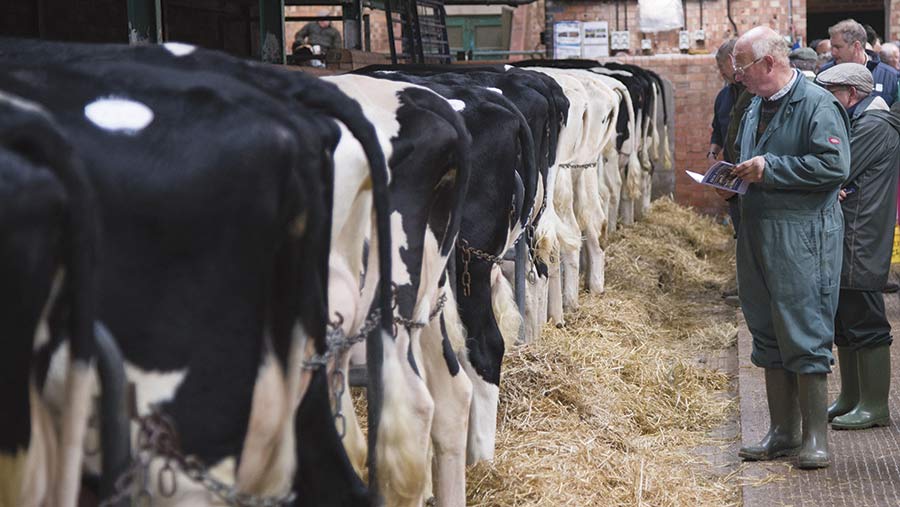 A remarkably resilient dairy cattle trade is being reported around the marts as many farms cope with break-even prices and rely on beef cheques to ease cashflows.

Defra figures show an average spring milk price at about 27p/litre, while English and Welsh liveweight cull cow values are 18-20p/kg up on the year.

Scotland, meanwhile, has culls cows 20p/kg dearer than at the start of the year. This is according to AHDB’s latest figures, which showed a slight drop in –O4L cow carcass values in late May to 270.6p/kg after two months of back-to-back increases.

A tremendous cull trade is supporting milker values at Market Drayton, said dairy auctioneer Stuart Hassall. At the latest sale, 59 were through seeing six over £2,000 and six over £1,900.

Top money of £2,350 went to JH Wynne and Partners, Shropshire, for Coxongreen Bryant Emelia. She is by Wa-Del Bryant and from eight successive VG/EX dams and is giving 38 litres.

Mr Hassall added that farms weren’t looking for passengers, with cows with poor udders or lacking condition hard to sell.

“A lot of cows were sold last year as people culled hard,” he said. “This has produced a shortfall in culls.”

He said milk supply could be tighter than people think and that he expects milk prices to take a positive direction through the summer.

Dairy cattle auctioneer Fred Spurgeon reported that beef prices are sustaining the flying herds in his area and keeping cash flowing for farms on 26p-28p/litre.

“Now we’ve had some rain and there’s a good crop of first cut in the clamp, the atmosphere is a bit more upbeat,” said Mr Spurgeon, who is reporting throughputs of 30 to 60 cattle at Gisburn’s weekly sales.

He told Farmers Weekly that even the thinner cull cows are making 120p/kg and Belgian blue-sired calves consistently hit £500 at three to four weeks, while TB-clean northern cattle are keenly sought after.

“The only thing I have resistance to is anything with a foreign tag in it. For some they struggle both as culls or dairy cattle.”

Ross milkers up 25% on the year

Premium animals are 25% dearer on the year at Ross, where auctioneer and valuer Gwilym Richards has reported a very strong trade for freshly calved heifers and young cows.

He told Farmers Weekly that supply and demand is hugely variable in his area due to the TB restrictions placed on farms wanting to either buy or sell, but that cull cows and autumn milkers are in demand.

“Milk and barren trade is back in vogue,” he said, adding that many cows were comfortably £120-£130 up on the year.

“People are buying good heavy milking cows with low SCCs and good udders, some not even in calf, with the plan being to get milk in the tank and then cull them as there is a strong residual value at the moment. Some of these older cows look quite dear compared to younger animals.”