Charolais bulls met a solid commercial trade at Stirling on Tuesday 21 February at the breed’s official spring sale, when bidding peaked at 25,000gns.

Commenting on the sale, society chairman Andrew Hornall said: “There was no shortage of commercial traders in the market for a Charolais bull today and no wonder with Charolais-sired suckler calves topping the markets on weight for age.

“Everyone has tightened their budgets this year and want a breed that will deliver the weights that the supermarkets demand in the shortest time.”

Lord, a 21-month-old son of the 17,000gns Balthayock Gladiator, heads over the water to Ireland to work in Co Sligo for Brendan Feeney. 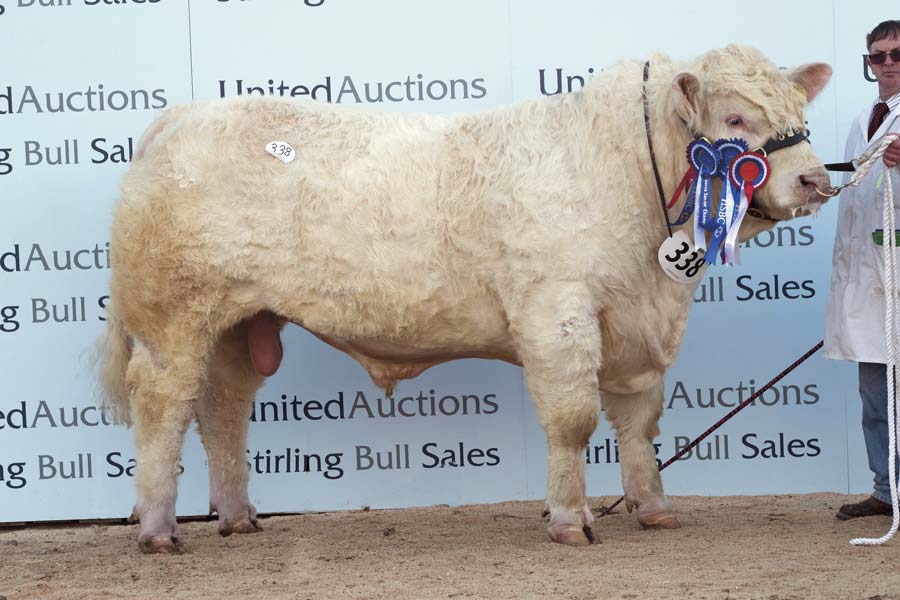 Following on at 22,000gns was the 18-month-old Newhouse Lonestar.

This son of the 30,000gns Dingle Hofmeister and home-bred dam Newhouse Flora going back to the 18,000gns Sackville Claudius, was bred and exhibited by R M Adam and Son, Forfar, Angus, and took the fancy of David, Marjorie and Paul Stobart, Scotby, Cumbria. 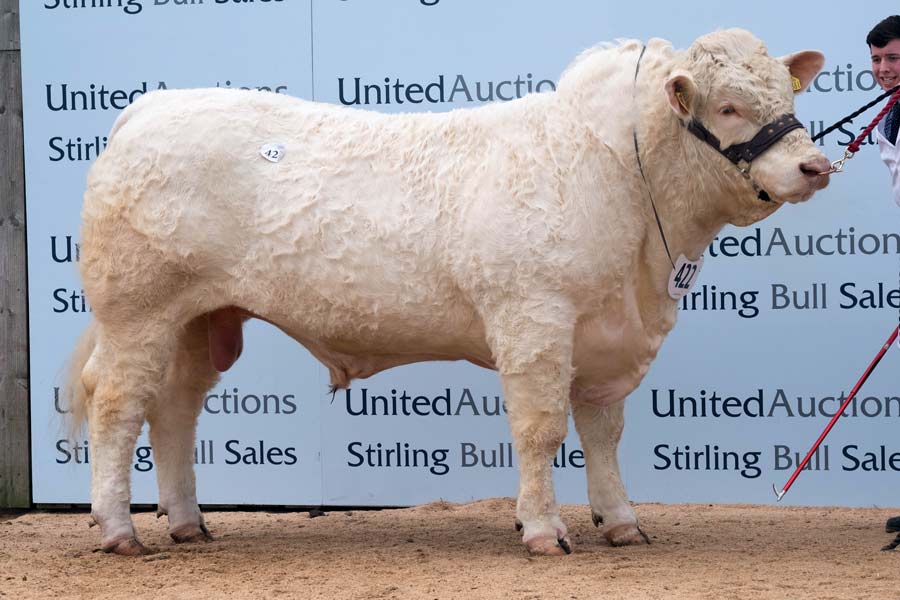 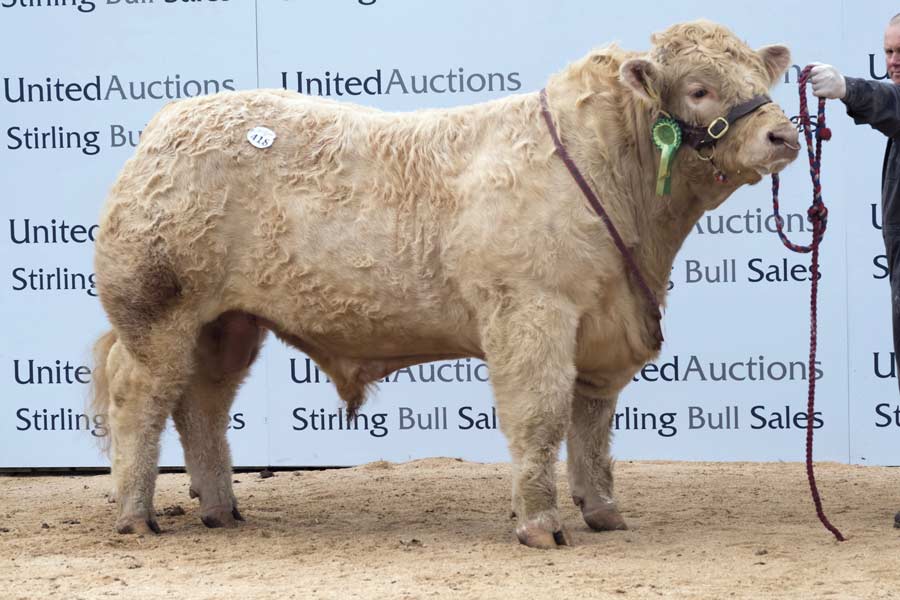 Matching the 16,000gns price tag and snapped up by Jan Boomaars, Woldingham, Surrey, was Woodpark Longbow, one of the youngest lots of the sale at just 15 months.

Longbow is sired by Deeside Gulliver and out of a home-bred dam going back to the 19,000gns Corrie Alan and was bred and exhibited by Will Short, Omagh, Co Tyrone. 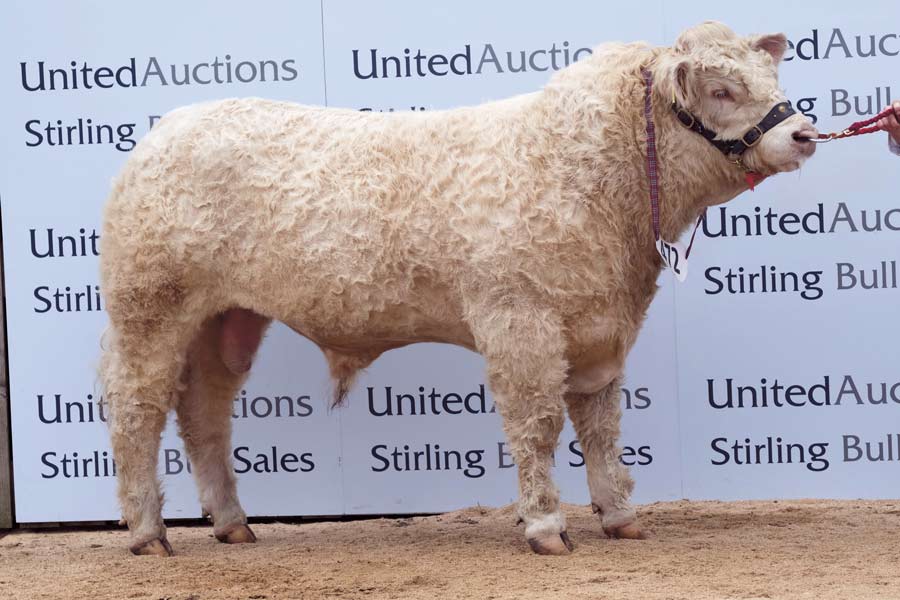 Next and the first of two red-ticket winners to sell at 12,000gns, was Inverlochy Landmark from John Irvine and Son, Ballindalloch, Banffshire.

W and CS Robb, Mauchline, Ayrshire, were the last bidders standing on this 20-month-old son of Inverlochy Hercules and Inverlochy Heiress, daughter of the Black Isle Show champion, Lochend Apache.

Another class winner to bring 12,000gns when selling to J and W Kellas, Keith, Aberdeenshire, was the Stars of the Future senior male champion, Carwood Leo.

The supreme and senior champion was the next to sell for a five-figure sum. 11,000gns was the price that secured the 21-month-old Edenhurst Leader from exhibitor’s A and JJ Forrest, Biggar, Lanarkshire, who had purchased him at breeder’s Peter and Vanessa Vasey’s dispersal sale in October 2015.

Leader is a son of the 17,000gns Sandelford Harrison ET. Jenny and John Rix, Colchester, Essex, were the purchasers.

Commenting on his champion, judge Chris Curry said: “He is the sort of bull that ticks all the boxes for the modern beef market.

A good all-rounder with smooth shoulders for easy calving, good length and very correct in his locomotion. He is easy fleshing and will breed progeny that can be finished at any stage.”

Another to secure a price tag of 11,000gns was Bartley Finnegan’s intermediate champion Battleford Laser ET, who caught the eye of fellow Northern Ireland breeder’s Stuart and David Bothwell of Ballinamallard, Co Fermanagh.

Selling at 10,000gns was an entry from Harold Stubbs and his grandson Alan Burleigh, Lisnaskea, Co Fermanagh.

Derryharney Lionheart, who was crowned Minsups intermediate bull champion last year, is sired by the proven high-performing short gestation and easy calving Blelack Digger and out of Derryharney Ace, who goes back to the 12,000gns Hillviewfarm Perfect.

The 18-month-old Lionheart goes on to work in Abergavenny, Gwent, for OTW Chandler and Co.