Charolais bulls met a ready trade at Carlisle on Saturday (13 May), with strong commercial interest bolstering bull averages to £5,158.13, a £151 increase on last year with five more sold.

The 15-month-old McIntoish is the very first calf to be bred by the O’Kane family and is sired by the 16,000gns Royal Welsh reserve champion male, Anside Foreman and out of the Irish-born Aghafad Hope. He was purchased by Highfields Park Farm, Hartfield, East Sussex. 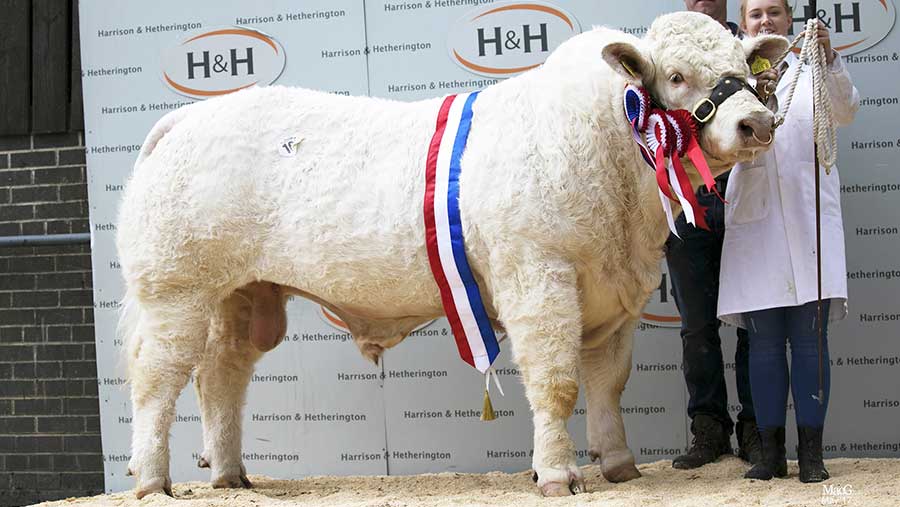 Next and selling for 11,000gns to Perthshire based breeders David and Nick Walter, was the October 2015-born yellow-ticket winner Gretnahouse Lunar from Alasdair Houston, Gretna Green, Dumfriesshire, who went on to sell a total of three to an average of £7,700.

His sire is the 12,000gns Carlisle reserve senior champion Wesley Equinox and his dam is the polled Gretnahouse Hazel who goes back to the Swedish Nynas Viril Av. 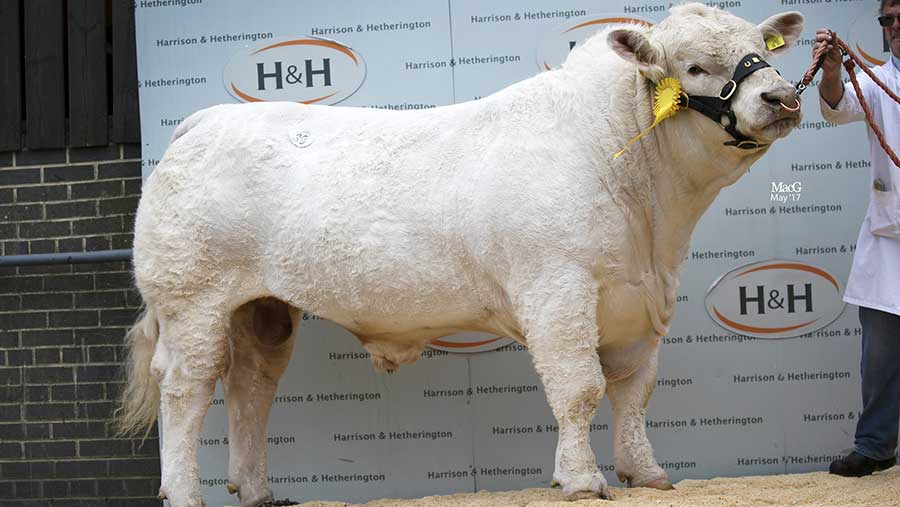 Following on at 10,000gns was another yellow-ticket winner, 18-month-old Caylers Lincoln whose breeding includes Balthayock Hamish and the home-bred dam Caylers Hostess who goes back to Thrunton Dominator. 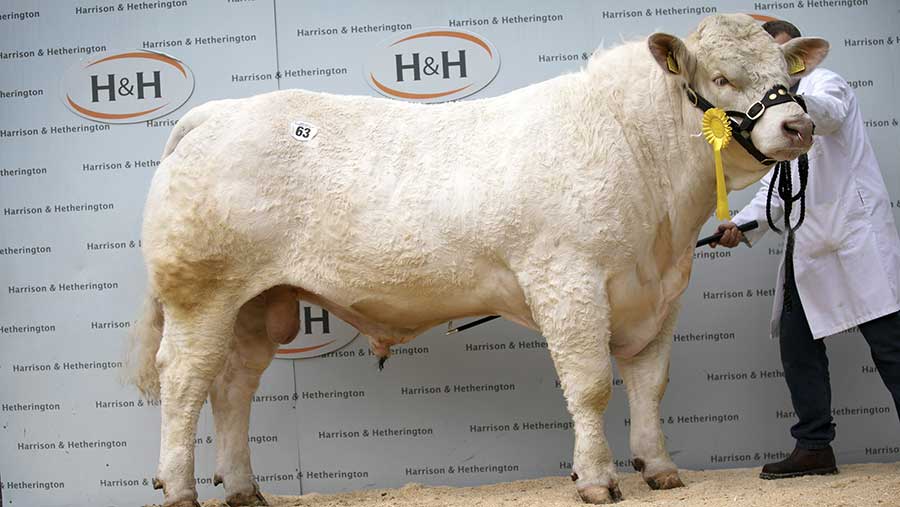 Another entry from Caylers Charolais was next in the money at 9,000gns. Caylers Limerick, an October 2015-born lad, also sired by Balthayock Hamish but out of the home-bred dam Caylers Iona, a daughter of Goldies Eddy, sold in a two-way split to WK and P Drysdale, Blairgowrie, Perthshire, and Michael Massie, Auchnagatt, Aberdeenshire.

Five bulls sold for 8,000gns apiece and three of them came from the Dumfriesshire home of Hamish Goldie, who sold a total of six averaging £6,877.50.

All three were born in November 2015. The first to sell was Goldies Lawson, who had been awarded the intermediate and reserve overall male championships in the previous day’s show.

Goldies Formidable is the sire of this one and the dam is Goldies Violin who has bred bulls to 26,000gns and goes back to Thrunton Trademark. Pre-sale judge Jane Haw showed the courage of her conviction when she purchased Lawson on behalf of breeders Mr and Mrs Andrew White, Worth Matravers, Dorset.

The very next lot matched the 8,000gns price for Mr Goldie, this time selling to Ouston Farms, Gateshead, Tyne and Wear. Goldies Limelight is a son of herd sire and home-bred Goldies Formidable, whose previous sons have sold to 26,000gns and 23,000gns and dam Goldies Collette who goes back to Goldies Vicechancellor.

Mr Goldie’s next lot, Goldies Landlord, by the 15,000gns Gretnahouse Heman and out of the 12,000gns Goldies Elation sired Goldies Hazel, also made 8,000gns when he was knocked down to AH Fisher, Stranraer, Wigtownshire.

This second-prize bull was bred and exhibited by Robert Milne, Elgin, Morayshire, and is a son of the 14,000gns Westcarse Houdini and Elgin Honey who is sired by the 10,000gns Thrunton Alpha. Purchaser was Rachel Dawson, Newton Burgoland, Leicestershire.

The final bull to make 8,000gns was an entry from Wyn and Diane Rees, Llangurig, Powys. He stayed local after catching the eye of GL Davies, Brecon, Powys.

The class-winning and February-2016-born Hendy Messi, is out of the Tullygarley Rollerball daughter Hendy Chanel and is sired by the 19,000gns Doune and Dunblane Show champion Corrie Alan.

There was a strong and steady demand for females with the section peaking at 7,000gns.

John and Sandra Middleton’s reserve supreme and female champion Hollywell Latin lead the section. Latin who heads back to Ireland with H and H Heron of Newtonards, County Down, is 20-month-old daughter of Thrunton Fairfax and Balmoral Show reserve junior champion Hollywell Harmony. 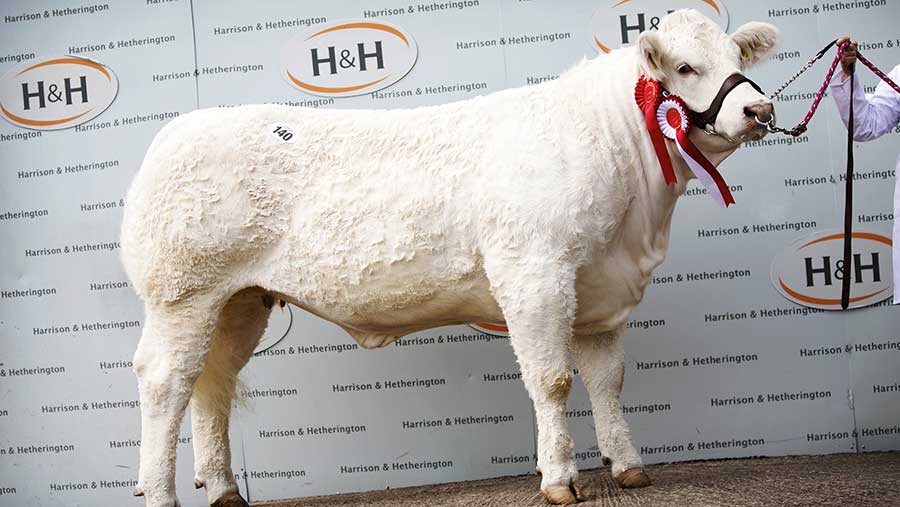 Just behind at 6,800gns and selling to TP Atkinson, Ulverston, Cumbria, was the 30,000gns Dingle Hofmeister daughter and October-2014-born Glenrock Jewel, along with her nine-month-old daughter Glenrock Melanie sired by Goldies Eddy. The pair were bred and exhibited by Stephen Illingworth, Eaglesfield, Dumfriesshire.