Top genetics from some of the best Suffolk flocks in the country attracted keen bidders at last week’s Three Nations Suffolk show and sale at Carlisle with gimmers peaking at 36,000gns and ewe lambs at 10,000gns.

As far as the Suffolk Sheep Society is aware 36,000gns is the highest amount paid for a female. Society chief executive Robin McIlrath said: “It’s great to see females going for this price in today’s market.

Commercial buyers are looking for Suffolk genetics and we are seeing the breed coming into its own again as a major player in the industry.” 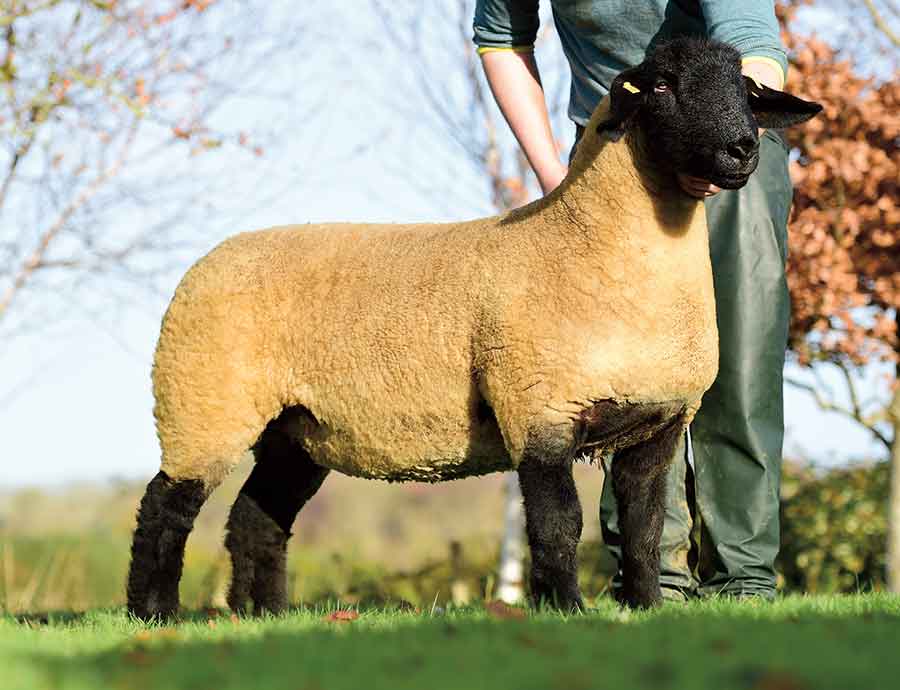 Sale leader at 36,000gns was a January 2014-born gimmer from well-known breeder Jimmy Douglas’ Cairness flock, Fraserburgh, Aberdeenshire. She is by Conchar Crusader and out of a ewe by Middlemuir Messi. She is ET sister to Cairness Cognac and is described as a gimmer with a great head and legs.

Also selling for a five-figure sum was a ewe lamb from Mark Priestley’s Limestone flock, Downpatrick, Co Down.

Described as the best ewe lamb offered for sale from the flock, the December 2015-born lamb is by the 14,000gns Castleisle Knockout, who was Stirling champion in 2015 and by a home-bred dam. She sold for 10,000gns to MJ Cornish, Buckfastleigh, Devon.

Mr Priestley went on to sell other lots at top money. Making 3,400gns was a gimmer out of the 19,000gns Muirton One Direction.

She sold having been scanned in-lamb with twins to Strathbogie A Kind Of Magic to fellow Northern Irish breeder Nicky Lowry, Crumlin, Northern Ireland.

The Rhaeadr flock of Myfyr Evans, Denbighshire, had a successful day’s trading leveling at a solid 4,000gns for a Cairness Cognac ewe lamb.

Described as having the potential to grow to a “big, long ewe” she was snapped up by Stewart Craft, Leslie, Fife.

He also purchased a gimmer from the same home for 3,400gns. This powerful Rookery Best Of The Best sired daughters is out of a home-bred dam by Baileys Blockbuster.

Dennis Taylor’s Ballynacannon Flock, Coleraine, Co Londonderry, made 3,400gns twice. First at this money was a gimmer by Mountford Mustang and out of a Strathisla Shadrach-sired ewe. She sold scanned with twins by the 21,000gns Rhaeadr Rolls Royce to SW Cobbald, Acorn Farms, Suffolk.

M Davies and Sons, Brecon, Powys, paid the same money for the Mustang daughter, who is out of a ewe by Limestone To-Tal. She sold having been scanned with twins to Solwaybank Master Debater.

The Solwaybank flock of I and J Barbour, Annan, Dumfriesshire, made 2,000gns for a gimmer by Solwaybank Solario.

She sold having being served by the 16,000gns Strathbogie Sirius, who is a son of Muirton One Direction to DP Delves, Churchstoke, Powys.