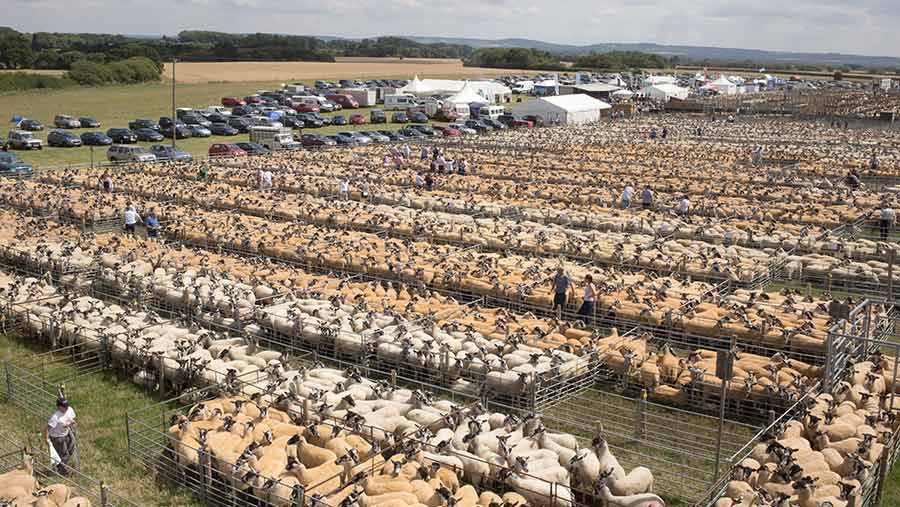 Averages for all female classes were up on the year, as a kinder summer has left buyers with plentiful grass covers and vendors with sheep in excellent condition.

“Trade didn’t recover all of the ground lost last year because the year before – 2017 – was an exceptional sale, with strong averages,” he explained.

“There was also confidence in short-term store lambs, although any lambs for finishing beyond Christmas were bought to a budget.”

Some vendors had seen dry North of England Mule shearlings increase £10-£12 a head to £130.

He said there could have been a need to restock after farms had been unable to buy during last year’s drought. “We sold around 7,000 mules, while normally this would be 10,000 head – I think there could be a lot of two-shear ewes sold this September that weren’t sold last year.”

Demand was strong for well-grown sheep that had lambed. Suffolk crosses topped with bids at £182 and £160 from George Eaton, Tingewick, Buckingham.

The North of England Mule section saw a bid of £170 for a championship-winning pen from Peter and David Morris, Brill, Bucks. Close behind was Henry Tustian, Epwell, Oxfordshire, who sold to £162, £158 and £156.

Will Alan, Hornton, Oxfordshire, saw his lambed sheep top at £148 and dry sheep from GE Haynes and Son, Towcester, Northamptonshire, sold to £150.

Texel Mules from an entry of 400 shearlings from Harrison Bros, Milton Keynes, topped at £170, while three-quarter-bred Texels from John Brown, Long Crendon, topped at £166.