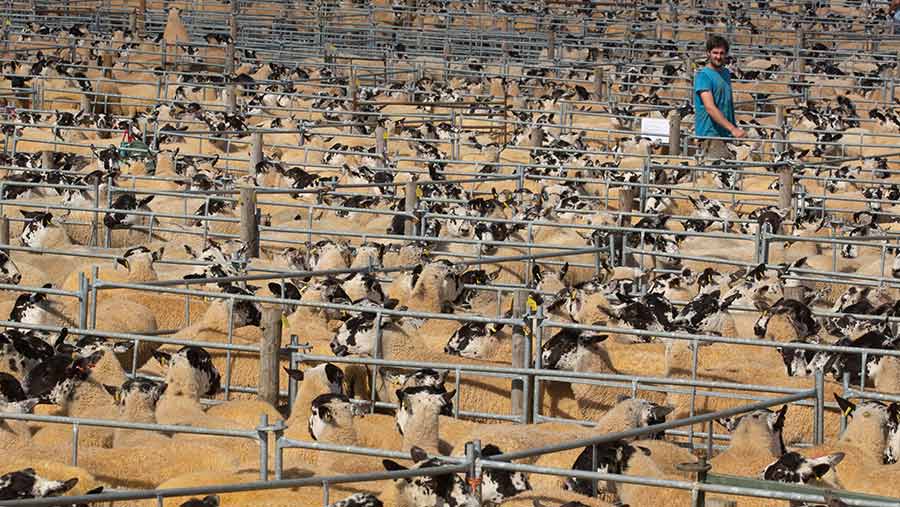 Grazing concerns and a drop in ewe condition were the main drought-related factors that restrained prices at Thame last week (2-3 August) as 25,821 sheep went under the hammer.

Averages were back for all female categories, particularly for sheep that had lambed. Dry sheep, on the whole, showed well, and were visibly less affected by the drought conditions.

Even decent, well-fleshed sheep were back slightly in general, but saw the best trade.

“The second-quality sheep got hit again,” Mr Draper said. “Beltex-crosses had a hit last year but they enjoyed some of the best trade last week, while the Texel-crosses had a better sale last year.

“A lot of people bought Cheviot gimmer lambs instead of North Country Mules and a lot of the Cheviots weren’t good enough so they had a real knock.”

He added that difficult lamb finishing conditions could mean lower demand for breeding sheep this autumn as more people had held on to lambs, in addition to the lack of grass in the southern counties.

“There is a little worry in the north among the auctioneers there regarding demand at the big upcoming sheep sales,” Mr Draper said. “Around the rings some concern was Brexit-related and generally things were cautious.”

Texel-crosses hit £185, achieved by the judge’s best pen of 25 from John Brown, Long Crendon, selling to Evans and Son, Marston Moretaine. The Harrison Brothers, Milton Keynes, saw a run of Texel-cross Mules to £180, with several pens at £165.

Day two saw Suffolk-crosses remarkably firm early on, with John and Michael Hanson in the money at £160 and Eddy Bullman selling to £145 for a run of dry sheep as 4,700 went through the ring.