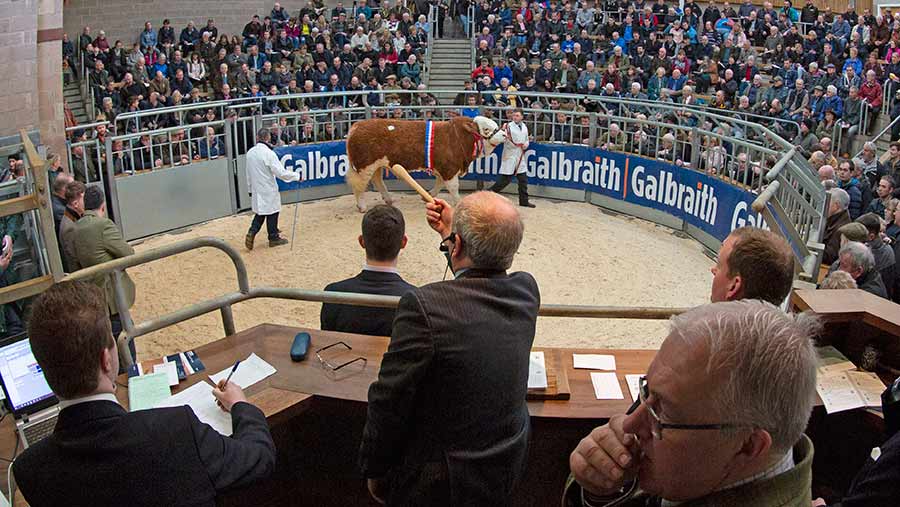 A challenging day’s trading saw both numbers and averages back in the Simmental ring at Stirling on Monday (18 February).

British Simmental Cattle Society chief executive Neil Shand said the difficult trading was perhaps a “sign of the times” and put it down to the beef price being back, winter costs being up once again and a huge amount of uncertainty regarding Brexit.

Trade topped at 14,000gns with Islavale Illusive from WS Stronach, Berryleys Farm, Grange, with a winning bid from HJ Warnock, Carrowdore, County Down.

Illusive is by Lisglass Barnabus son Atlow Dixon and out of the Clonagh A Super Star daughter Islavale Danielle. He boasts a terminal sire index (TSI) of +81 and a self-replacing index (SRI) of +93. 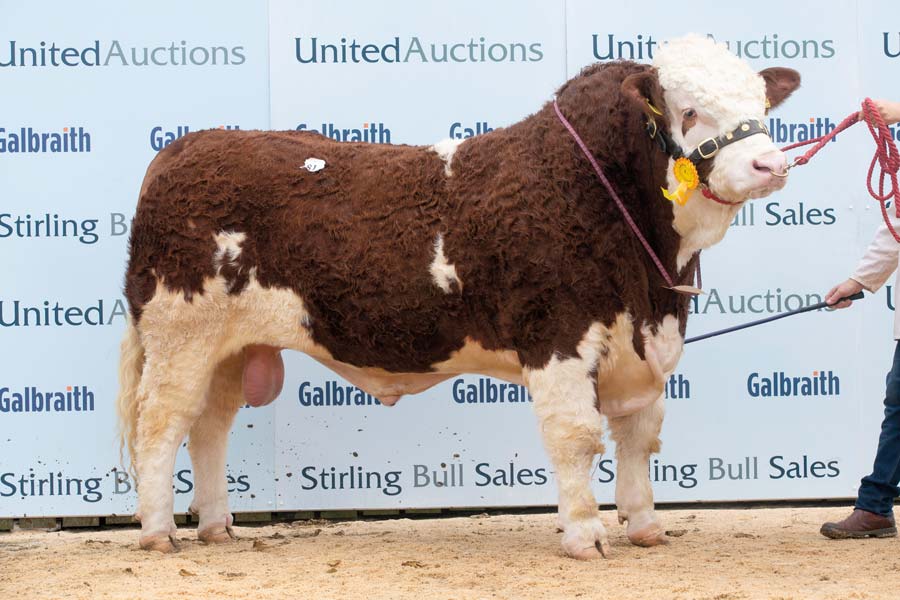 Next was a show heifer at 13,000gns from MJ McMillan of the Brandane herd, Sacombe, Ware, and bred by Boddington Estates. Sterling FCUK Impuls had taken first at the Royal Highland Show and first, junior and reserve female championships at the Royal Welsh and English National last year.

She is out of the Sterling Cotswold daughter Sterling Candy’s FCUK and is by Sterling Gino, an Auchorachan Wizard son. 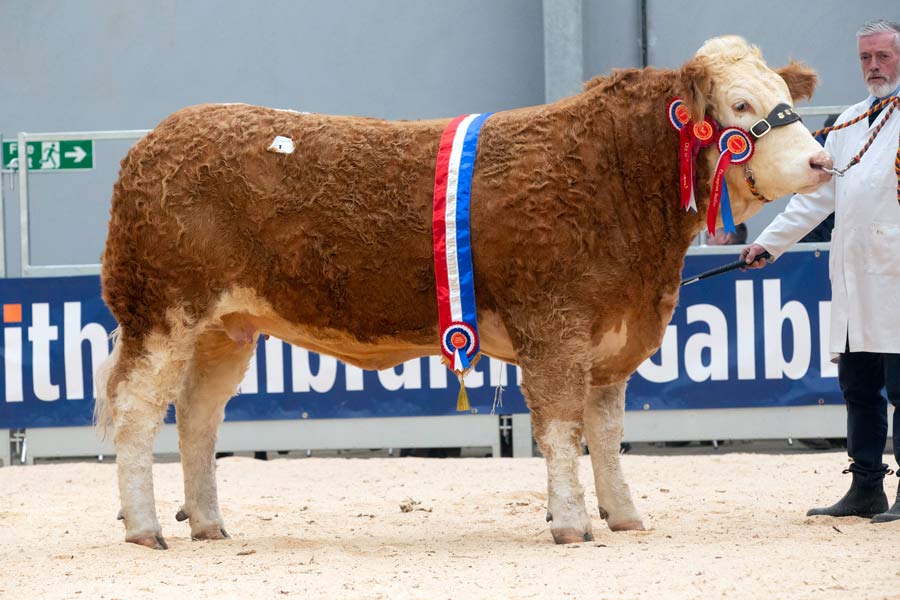 Three lots then came at 11,000gns, the first being a stablemate of the trade topper from the Stronachs.

He was knocked down to Seamus O’Kane, Drumquin, County Tyrone. This one was Islavale Invincible (SRI +81, TSI, +65) who is out of Curaheen Bandit daughter Islavale Bramble. His sire, Curaheen Giant, averaged 13,500gns with his first two sons in October 2018. 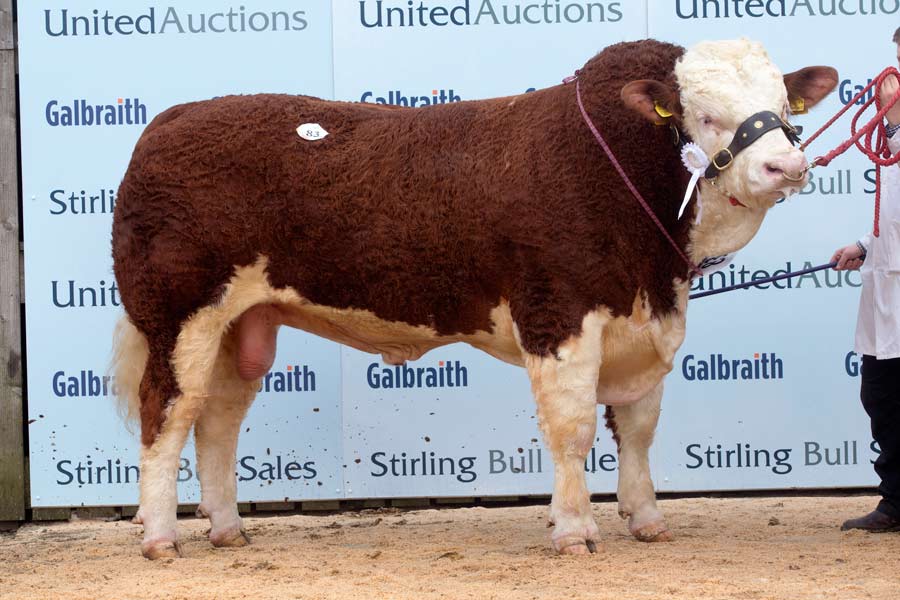 Also at this money was Blackford Island Warrior (SRI, +80, TSI, +67) from WG MacPherson, Croy, Inverness, which caught the eye of D and G Manson and Sons, Alves, Forres.

Warrior is out of the Blackford Valmer daughter Allegro and is by the Curlieu Knight son Blackford Galaxy. 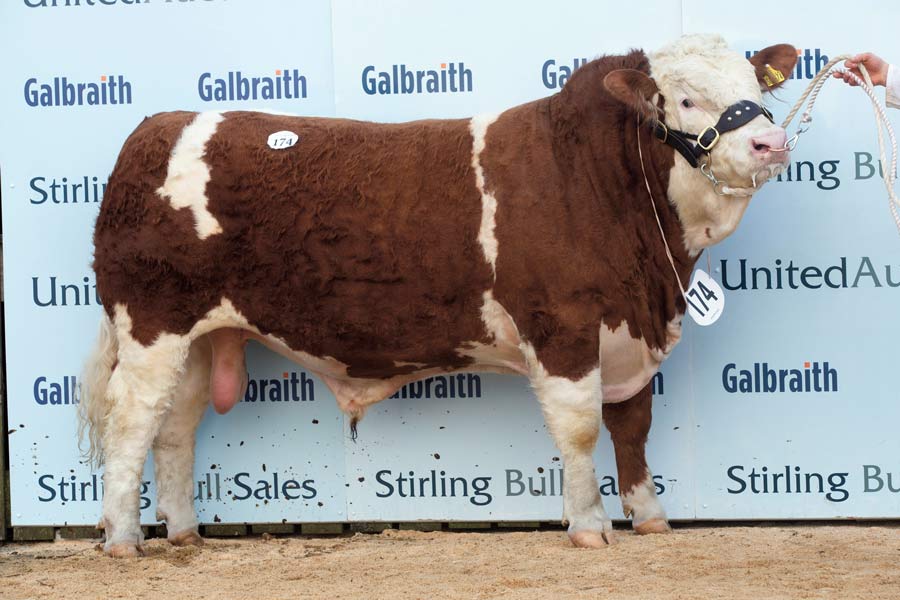 The third at 11,000gns was another from the Blackford herd; Island Rock (SRI +84, TSI +81). A and B Munro managed the winning bid and took him back up the road to Inverness-shire to work at Wellhouse, Beauly. 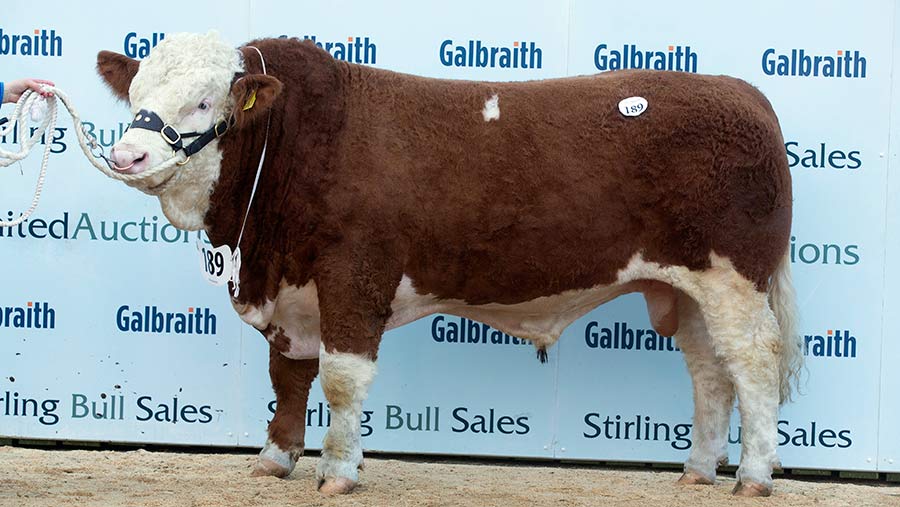 Three sires then made 10,000gns, the first being Denizes Impressive from MA Barlow, Four Oaks, Lancashire. He was knocked down with 100 straws of semen to JH Wood, Popes Farm, Preston.

Impressive is by the Whitemire King Kong son Denizes Fantastic and is out of Denizes Trixie-Belle, another Auchorachan Wizard daughter.

The Moffats of Innerwick, Dunbar then saw a 10,000gns call for their Curaheen Gold Digger son Innerwick Ivor, which was knocked down to Delfur Farms, Rothes, Banffshire. He is out of the Promi daughter Innerwick Freya.

Delfur farms also snapped up Woodhall Instinct for the same price. He was bred by H and J Macaskill and bought from Geoff and Kate Anderson of the Quaryhill herd, Myreside Farm, Elgin. He is out of the Steinadler daughter Woodhall Eva and by the Curaheen Bandit son Islavale Frontier.