Averages continued to rise for Charolais bulls at Welshpool on Saturday (27 April) to pass the £4,000 mark.

He is out of the Doonally New daughter Trefaldwyn Daffodil.

Trade was reported to be underpinned by strong commercial demand and the highlight prices were in line with Welshpool’s past two sale, which topped at 6,500gns and 7,000gns.

Second best on the day at 6,200gns was Caylers Nissan, a son of First out of Caylers Lara, a Thrunton Goldeneye daughter. 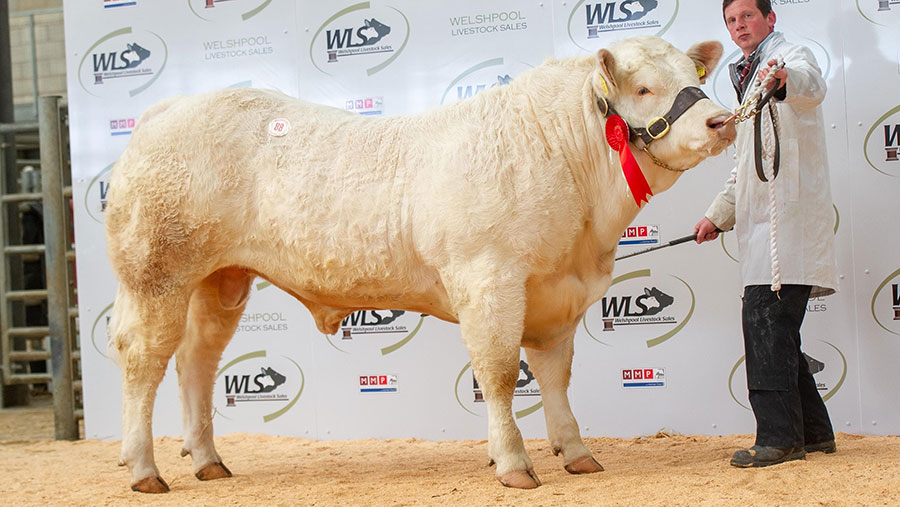 Trefaldwyn Ore made the top call of 7,000gns

He was sold by the Barker family, Nuthampstead, Hertfordshire, and caught the eye of Messrs Clayton, Newtown, Powys. 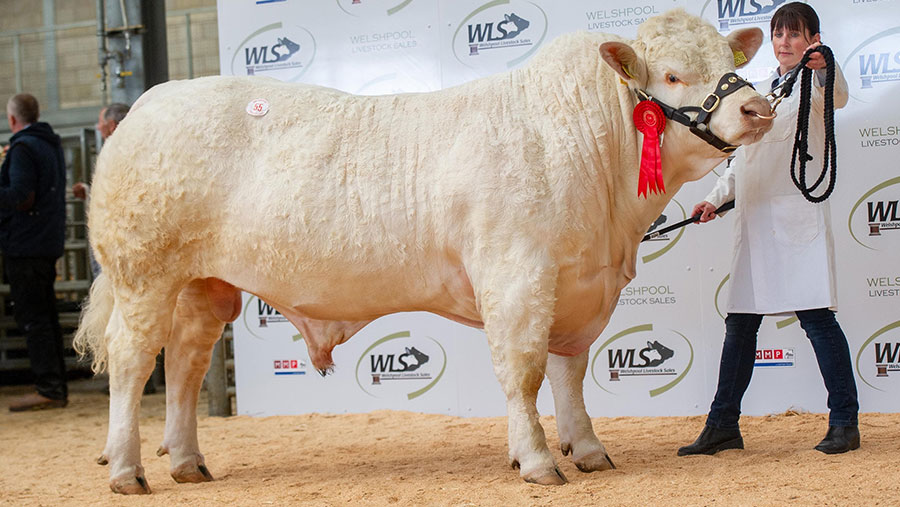 See also: How a Charolais herd is improving its maternal traits

Esgob Osian, from Gareth Jones, Cwmtirmynach, Gwynedd, sold for 6,100gns was to D Jones, Ceredigion. He is the first Caylers Hustler son to be sold.

His dam, Esgob Helen, is a daughter of the 26,000gns Anside Excalibur. 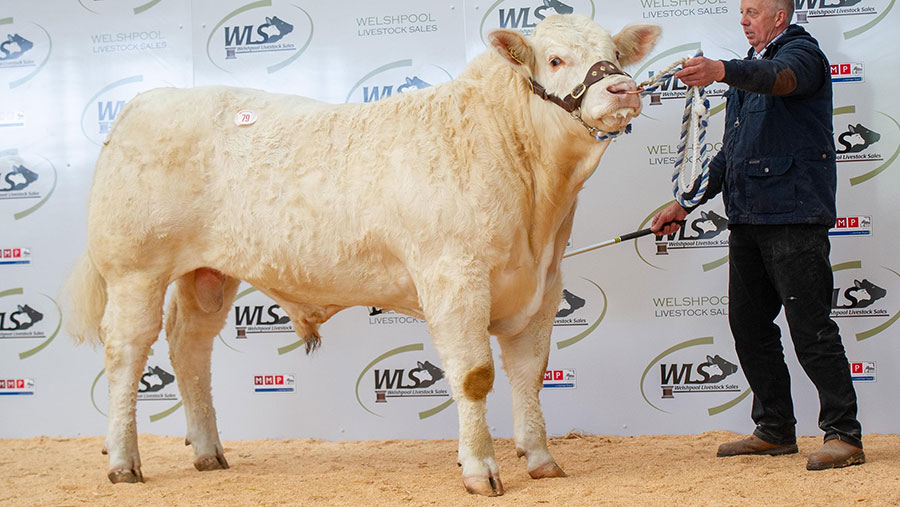 Next at 6,000gns was Dooley Norris from David Thornley, Hartshorne, Derbyshire. He caught the eye of JAV Mills and Sons, Builth Wells, Powys.

Norris is by Davally Igolo and out of Dooley Leya, a daughter of the 15,000gns Goldies Dynamite. 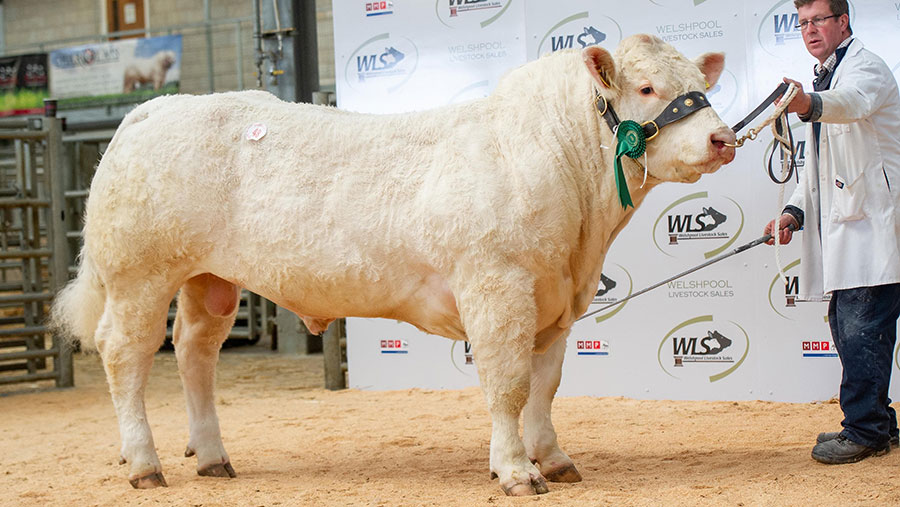 Then at 5,800gns was Montgomery Nevile from Messrs Robert and Jones, Welshpool, Powys. He was knocked down to Messrs Stephens, Neath, West Glamorgan.

He is by the 9,000gns Balmyle Harlequin and is out of Montgomery Eiddwen, a daughter of the French-born Suzeringie. 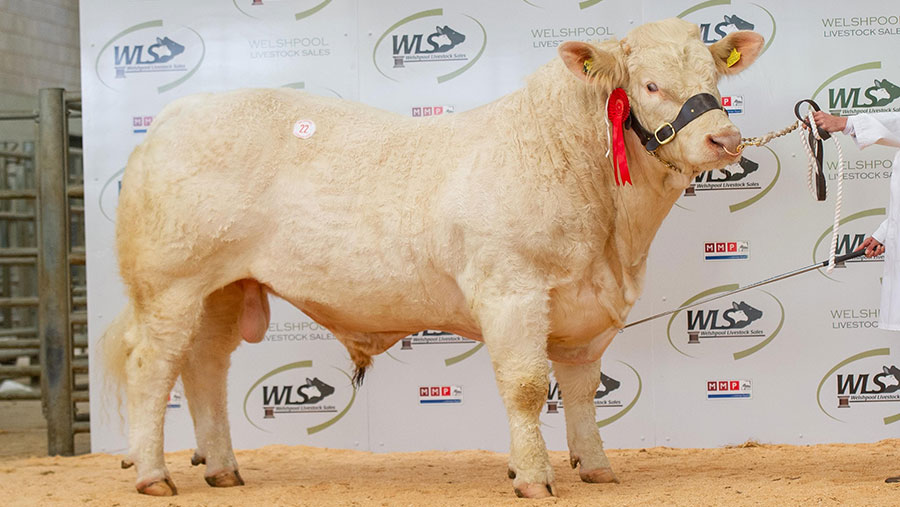 Matching this was Caylers Nero, also from the Barkers. He made 5,800gns when sold to RG Lewis, Caernarfon, Gwynedd. He is another First son, this time out of the Goldeneye daughter Caylers Lily. 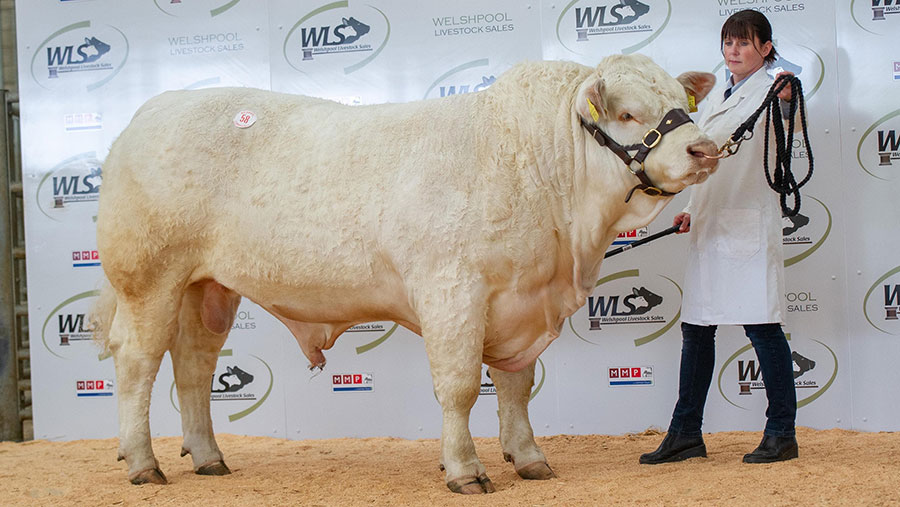