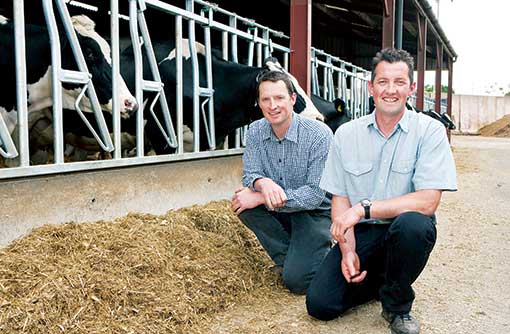 They installed a StepMetrix from Boumatic seven years ago to reduce the incidence of lameness within their 450 Holstein herd.

The technology enables them to detect lameness, before the human eye observes clinical signs.

Cows walk over the StepMetrix platform twice a day after milking and weigh cells measure the speed, gait and pressure of their steps against a model of a cow with perfect locomotion.

It then allocates each cow a score between 30-100 and when the score falls below the threshold of 38 it will need to be examined and treated immediately.

Head herdsman Alan Roberts said it has successfully reduced white line disease, sole lesions and ulcers, adding: “Quite often there is nothing to see, you are guided by the technology.”

Previously every eight in 100 cows were lame each year. But by embracing the technology they have reduced the incidence of severe cases of lameness and cull cow rate dramatically.

Using pH boluses have also been critical to the Kings’ system. The unprecedented wet weather experienced in the summer of 2012 led to poorer quality silage being made and as a result milk production fell by almost 1,000l on the year.

But pH boluses have allowed them to tweak the ration for optimal rumen function, resulting in improved yield and better diagnosis of sub-acute rumen acidosis (SARA).

The farmBolus, developed by eCow, shows real time rumen pH and temperature data. It is weighted to stay in the reticulum, which has a constantly slightly higher pH due to saliva production. The reticulum data can therefore accurately denote rumen pH.

Rumen pH needs to be as close to 5.6 as possible (shown as pH 5.8 in the reticulum). Any lower and it kills off fibre digesting bacteria placing the cow at risk from SARA.

Richard Vecqueray, director of the Evidence Based Veterinary Consultancy, explained that without this technology we can easily misinterpret what we see

“The cows had good production levels, were eating good maize silage and producing firm faeces, but they were slightly flighty. The pH showed under 5.8 in the reticulum for large periods of the day. So while the animal and faeces may look ok, the rumen pH was wrong for long periods,” he said.

As a result subtle changes were made to the diet, including increasing fibre in the ration.

“Within 48 hours, the pH of the rumen increased with hardly any time at all being spent below 5.8,” added Mr Vecqueray.

Three to four boluses should be put into each cow group and they are most useful in transition cows.