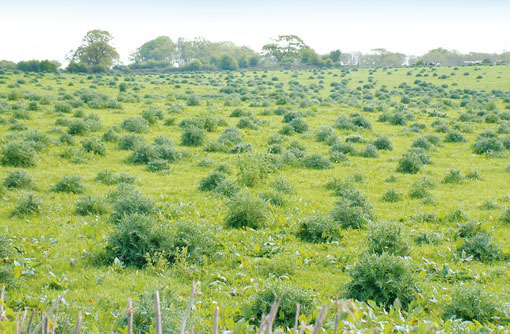 While there is little scientific proof that thistles exacerbate orf, which causes the development of scabby lesions on non-woolly areas, there is plenty of anecdotal evidence, admits Andy Bailey, principal biologist for Dow AgroSciences.

But it makes sense that if a lamb pricks its mouth while grazing, this will provide an ideal entry point for any virus present. So getting rid of thistles in orf-prone farms is a sensible precaution.

Thistles can be easily spotted now as they approach flowering – but this is not the right time to treat them with herbicide, advises Mr Bailey.

He recommends topping them and waiting for the re-growth before spraying a couple of weeks later when they are 25cm high or across. A translocated clopyralid-based product will then move down into the roots as long as the plant is not stressed.

On hilly pasture or where farmers are worried about losing clover, Mr Bailey suggests considering a more targeted approach – applying herbicide with a weed-wiper or spot treat with a knapsack sprayer.

Getting rid of thistles in organic systems is difficult and requires a regime of topping and leaving the grass long to shade the re-growing thistles to weaken them. However this will never achieve complete control and can reduce grass utilisation.

When Hefin Llwyd took over managing Taw Barton Farm 13 years ago he says it was like Thistle City: poor pastures dominated by native grasses were covered with large patches of creeping and spear thistles.

Then, up to 20% of lambs could be infected with orf each summer, causing mastitis in ewes and making it difficult for lambs to graze. Eight-week-old lambs grew at 200g/day or less on grass, way below the 350g/day achieved on the clover-rich pastures of today.

“Grass and clover drive my lamb finishing business,” Mr Llwyd explains. “The fields have been transformed by getting the basics right such as pH, P and K and good management. They now produce an average of 9,000kg DM/ha with just 30kg/ha of purchased N a year.

“I graze pastures down to 4cm to use as much grass as possible, which forces lambs to graze closer to thistles than they might do in more lax grazing regimes – so it is important the fields are thistle-free.”

A vigorous spray programme using clopyralid-based products took out most of the broadleaved weeds in the first two years, with whole fields treated with a tractor and boom sprayer.

In following years, persistent patches were tackled with a two-metre weed wiper pulled by a quad bike.

Now Mr Llwyd spot sprays any recurring problem areas with a lance sprayer and 9m (30ft) pipe drawing off a 60-litre tank on the ATV. This is done four times a year to make sure every single thistle is treated.

“The zero tolerance approach to thistles has paid off – for the past four years we have had no orf here at all,” says Mr Llwyd.

“We have never vaccinated as I felt it was not a whole flock problem and did not want to introduce a live vaccine. But tackling the thistles has done the trick. It is also a relief not to catch orf myself any more.”