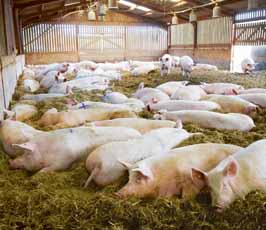 Young growing pigs that develop acute arthritis linked to Mycoplasma hyosynoviae organism will grow at only half their normal rate when left untreated.

Lameness caused by Mycoplasma hyosynoviae infection is increasingly being recognised in the UK and can affect between 10% and 30% of a herd. With lameness now a key welfare indicator on pig farms, supermarkets are keen that farmers keep on top of the problem.

However, vet David Burch of animal health consultancy, Octagon Services, says although most herds are infected with the organism it doesn’t often develop into a disease situation.

The most common trigger is when breeding gilts or boars are moved to new units and the organism is released, first into the bloodstream and then the joints.

“Within three weeks of arriving at a new farm, pigs will often go lame because of the stress associated with moving to a new environment and mixing with other pigs.

“Animals will still grow, but at half the rate they would normally develop,” he says.

In a healthy animal, Mycoplasma hyosynoviae lives in the upper respiratory tract, nose and tonsils without causing any clinical signs. But in a disease situation, the organism invades the joints and tendon sheaths of susceptible animals and causes lameness and swelling.

Infection occurs mainly in young animals, after immunity derived from colostrum has worn off. This usually happens at between eight and 12 weeks, but gilts sometimes don’t get infected until they are introduced to a new herd or are in the early stages of pregnancy.

Mr Burch says problems can occur when gilts or young boars, not previously infected, develop the disease at between 50kg and 80kg and are being selected for breeding. “The disease can cause real clinical problems in these pigs – treatment is vital,” he says.

The most likely reasons for the disease to develop and spread, apart from the stress of movement to a new environment, are low temperatures and draughts in housing, poor ventilation, high stocking densities and reduced energy intakes.

Onset is sudden, starting with reluctance by the pig to stand up at feeding time, lameness and visible swellings over the hock and stifle joints. Affected pigs can only stand for short periods because they are in considerable pain and they may also shiver.

Another classic sign is a red bottom because an infected pig will sit for long periods.

Mr Burch says problems occur when pigs are not treated. “A farmer may not recognise the symptoms and think a pig is sore because it has slipped, but if untreated it can lead to chronic lameness,” he says.

Mycoplasma arthritis can be a recurring problem in breeding gilts, particularly during the first three weeks after they have been introduced to a farm and sometimes after the first litter.

Published research conducted by Mr Burch concludes that tiamulin is an effective treatment for Mycoplasma arthritis, equally as effective as lincomycin, another antibiotic commonly used in the treatment of this condition.

He conducted a trial on a herd of pigs seriously affected by Mycoplasma arthritis to establish the effectiveness of tiamulin. Clinically affected pigs were treated for three consecutive days. Their weight gains and reduction in lameness scores during a seven day trial were compared to an untreated group and those treated with lincomycin. Both the tiamulin treatment levels appeared to be effective with marked improvements in weight gains and reduction in lameness scores compared to the untreated group. The improvements were similar to those achieved in the pigs treated with lincomycin.

Identifying the period of onset is important in controlling the disease, says Mr Burch.

He says a range of actions can then be undertaken to treat mycoplasma arthritis, in particular:

* Medicate susceptible groups over the critical period in their feed with either lincomycin or tiamulin.

* Promptly treat gilts and boars by injection if clinically lame.

* Assess the quality of housing – in particular low temperatures and draughts, which can act as trigger factors.

* Avoid stress from mixing and fighting.