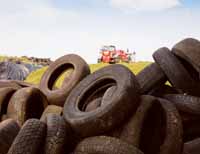 Farmers making silage this season could be putting livestock at risk if they don’t perform a tyre wire audit on farm.

Before silage making begins, check your tyres and discard any that could pose a risk to tyre wire getting into the silage clamp, said VLA Vet investigation officer, David Harwood.

There are far too many tyres on farms that are in risky conditions, says consultant Chris Savery, The Dairy Group.

“Checking tyres for wires is just another job in the silage preparation process. All producers using tyres on silage clamps should be prepared to remove a certain proportion every year.”

And with the high cost of making silage, coupled with the high price of bought in feeds, farmers cannot afford to waste home produced forage or compromise quality.

Difficulties surrounding disposal has meant more tyres have been retained on farm since the nineties. Consequently there has been a steady increase in problems associated with traumatic reticuloperitonitis or tyre wire disease.

Classic trauma includes wire in the heart, resulting in a fatal build up of pus in the bag around the heart, explained vet Andy Biggs, The Vale Vet Group.

However, Mr Harwood said tyre wires have the potential to travel throughout the cow.”I have seen cases where wires have gone sideways into the liver or upwards into the spleen and other organs causing the development of abscesses.”

In these cases clinical signs are often vague. A traditional good milker may drop yields or lose body condition.

As an alternative to tyres, several companies produce self weighting silage sheet covers.

According to Gerard Thomas, technical director of Thomas and Fontaine, using weighted covers not only prevents tyre wire from getting into the mixer wagon, but is also quicker when sheeting up.

“Overall using weighted covers is a cleaner process and also reduces the likelihood of bird damage. They can also be reused year on year,” he said.

These sheets are not a replacement for silage sheeting, but are placed over the top. Gravel bags can then be used to weigh down the edges and overlaps of the cover sheet.

Consultant, Gareth Anderson of FarmGate Nutrition said about 50% of Northern Irish dairy farmers use weighted covers and sand bags as an alternative to tyres – mostly due to ease of use.

Rubber mats are also beginning to be used by some producers in NI. “These are similar to cubicle mats and can be laid over the top of the silage sheet,” he said.

Weather resistant bags with a crumb rubber filling, free of wires, have also been designed to weigh down sheeting, explained PJ Burke, sales manager for Easyfix.

Magnet bolusing cattle can also be a worthwhile exercise to reduce the likelihood of ingested wires causing problems, and is practiced widely by producers.

“It is also increasingly common to see magnets on mixer wagons, but this does not prevent metal from being picked up at grass,” said Andy Biggs.

“It’s a judgement calls to whether magnet bolusing cows is appropriate. However, there is no downside in doing so, apart from the initial cost and labour.” Magnets costs about £2 a cow, but they last for a lifetime.

Magnet bolusing 400 milkers and followers at Ennerleigh Farm, Tiverton, has been part of an overall insurance strategy for dairy and beef producer David Partridge and son Clive.

Over the years, the farm has lost a lot of cows to TB, so by magnetting dairy cattle, the farm is removing any potential variable that could cause more cattle losses.

“Although there was no proof we were losing cows as a result of wires, our vet Andy Biggs said there was the odd cow that had been found with a heart infection – the magnets are an insurance policy,” explains Mr Partridge.

At under £2 a cow, saving one animal easily pays for the cost of bolusing the whole herd.

All of the milking herd was magnetted about three years ago and since then all home-bred replacements are bolused prior to calving.

“We bolus all in-calf heifers two weeks prior to calving. It may be more logical to do them as yearlings, but by doing it close to calving we can combine it with other routine tasks such as worming and clipping.” Because activity collars are also put on stock at this stage, it also allows staff to see when stock have been magnetted.

“A metal detector on the mixer wagon is definitely a worthwhile extra. We’ve looked at three places to prevent metal getting into the cows.

“Now, if the abattoir found a little bit of metal filings on the magnets, I’d be horrified.”

Mr Partridge believes most farmers could benefit from bolusing as part of their normal routine.

Sheeting up the silage clamp is never an attractive option when it involves handing large numbers of dirty tyres, but using weighted silage covers could put an end to the mess.

“Initially I thought the covers were a horrendous price, but once we used them on one clamp, we decided to buy one for each of our four silos. It’s removed the hassle of taking tyres on and off.”

In the past, it used to take the whole day to tyre up one of the clamps. Now it takes Mr Minford and his son two hours. Metre-long gravel bags are also used on the edges and joins of the cover.

“Storage was always an issue with tyres and the process of sheeting up was messy. The weighted sheets cut down the amount of waste.”

And although wires were never an issue for the 180 Holsteins at Primrose Farm, Antrim, Mr Minford has always been aware of the potential risk.

“I have heard reports of wire splinters in cows and always threw away old tyres. However, by using the sheets we have reduced the risk of problems in our herd.”

• To bring tyres onto farm for use on silage clamps, farmers will need to apply for a U8 waste exemption from the Environment Agency