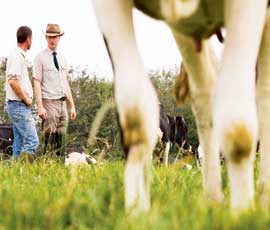 UK farm vets must brush up on communication skills and deliver a core advisory service rather than just hands-on diagnosis or face having income undermined by suppliers offering free vet advice.

That was the warning from Cheshire farm vet Owen Atkinson, who told the recent meeting of Cheshire Grassland Society most UK vet income relies heavily by pharmaceutical sales. “In the US, vets have already seen income eaten away by commercial companies offering free vet advice with products.”

“If we lose control of pharmaceutical sales, we lose control of income,” he said. That could see farm vet numbers decline to the detriment of the livestock sector. Instead of simply being protectionist about drug sales, vets had to look at new ways to secure income, he suggested.

“As a vet, I have three products to sell,” Mr Atkinson told CGS members. “My clinical work such as calving cows, medicines to support treatment of livestock, and my knowledge. The latter is what I believe can add most to a farm business.”

Having been granted a Nuffield scholarship, Mr Atkinson, who works for specialist farm vets Lambert Leonard and May – part of XL Vets group – visited The Netherlands, the USA and New Zealand to see how vets were using knowledge to generate new income.

“In The Netherlands, a vet told me knowledge wasn’t for sale. Producers are bright, entrepreneurial and capable of sourcing their own. Instead, vets like me will be paid to help producers manage change.

“In New Zealand, vets operate in much the same way as the UK, although a typical practice may have 9000 cows a vet compared to the UK’s 3000 cows a vet. Income is still heavily dependent on drug sales,” he explained.

“Some now act as facilitators, helping producers implement change driven by research into the day-to-day running of a dairy herd. These ‘flip chart’ vets support ‘muck and magic’ vets that still do the practical work such as pd-ing cows.”

The change in role is helped by New Zealand producers’ willingness to seek out new knowledge, he said. “Producers will pour into meetings and training sessions, demonstrating a hunger for knowledge. The difference is, I believe, because many New Zealanders choose to be dairy producers rather than it being an obligation to a family farm as in the UK.”

The change in role will not suit all vets, explained Mr Atkinson. It relies on being able to communicate with producers, explaining change and how it can be implemented.

This would put UK vets in direct competition with established on-farm advisers. However, the value to a producer will come where vets demonstrate a deeper understanding of issues and how to implement change to improve farm margins, he suggested.