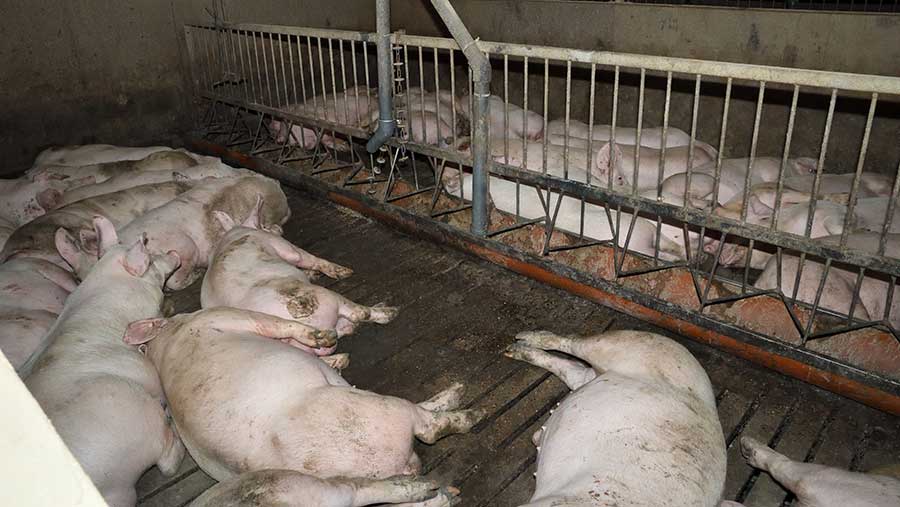 An investigation is under way after workers were secretly filmed violently abusing pigs at one of the country’s biggest producers.

Four workers have been sacked after an animal charity released shocking footage of pigs being repeatedly kicked in the head, jabbed with pitchforks and hit with gates.

Animal rights campaigners Animal Equality placed hidden cameras at Fir Tree pig farm in Lincolnshire, following an anonymous tip-off. The footage has been passed to the RSPCA to investigate.

The charity said one pig was left “downed” and without veterinary care for 48 hours, but it was later shot.

Workers were also filmed hitting pigs in the face and head with heavy plastic boards, spraying marker paint directly up a pig’s nose and laughing about the abuse and swearing at pigs.

The Godfrey family, who own the farm, along with Elsham Linc, told Sky News: “We are shocked by the actions of those involved as their abhorrent behaviour does not represent our business.

“We are a family-run farm where the care and welfare of our pigs is paramount.

“We have been able to identify the four individuals in the film and following an immediate investigation their employment has been terminated.”

Toni Shephard, Animal Equality’s UK director, said: “The workers show complete contempt for the animals in their care and seem immune to their suffering, even when the pigs scream in pain. We demand that they be brought to justice.” 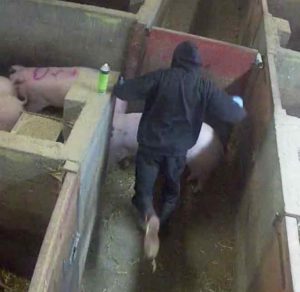 Animal Equality investigators made multiple visits to Fir Tree Farm – which holds 10,000 pigs – between 1 to 27 April 2018 and placed hidden cameras in the buildings where violence had been reported.

They also documented dozens of pigs with severe tail-biting wounds, some critically infected, as well as many heavily scarred pigs and several with hernias.

“We are clear that the actions of the individuals depicted in the footage are indefensible and should be treated accordingly,” it said.

“Such behaviour is abhorrent to all pig farmers and the business involved, which has acted responsibly and immediately by terminating employment of the members of staff following a thorough investigation and is co-operating fully with the authorities.

“The NPA will take the lead in investigating what further measures can be put in place to prevent any similar incidents from occurring on British pig farms.”

This is the third time that Animal Equality has filmed workers violently abusing animals on British farms.

In 2016, a worker on Pyrland dairy farm in Somerset was filmed slamming newborn calves to the floor and kicking cows in the face just hours after they had given birth. He pleaded guilty to two cruelty charges in April 2017.

In 2012, two workers were filmed beating piglets to death with a metal bar on Harling Farm in Norfolk. Both men pleaded guilty to cruelty charges and one was sent to prison for 18 weeks.