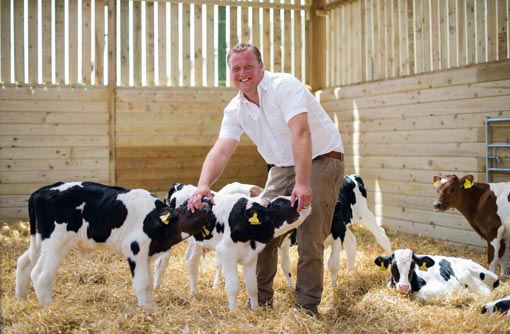 A renewed appetite for British white veal has created a market for thousands of male dairy calves each year. One farmer has credited this resurgence with saving his struggling beef and sheep enterprise.


Mike Brend, of Branch Farm, Barnstaple, Devon, became part of Sainsbury’s integrated supply chain last year and he says it has secured his future and saved his business.


Rent was £247/ha, feed costs were unsustainable, he had a young family to support and banks were unwilling to lend. It’s an all too familiar story.


Mr Brend, who is a first-generation farmer, says his future was “hanging in the balance” and it would have been only a matter of time before his business went bust.


A turning point came last year in August when the facilitator, Blade Farming, approached him to contract-rear veal for Sainsbury’s.


As one of the supermarket’s eight dedicated veal producers, Mr Brend now rears in excess of 300 calves a year.


Sainsbury’s agricultural manager Alice Swift attributes this “veal appeal” to the fact there is a desperate need on dairy farms for an outlet for bull calves.


“Farmers need an alternative and we have to give them one,” she explains.


As opposed to calves being deemed worthless and being shot at birth, dairy producers are paid £1.30/kg a calf for a minimum 50kg liveweight at two weeks of age.


“This equates to £65 for a black and white bull calf that used to be worth a fiver,” she explains.


Veal producers are paid based on a six-month management contract and the price is reviewed annually through Sainsbury’s cost of production model, which Mrs Swift says protects farmers against market volatility while securing supplies for the retailer.


“Without farmers we don’t have a business and that’s imbedded in our strategy,” she adds.


In the past 12 months, demand has grown exponentially and 40 veal calves are now being supplied to the retailer each week to provide a range of cuts including cross cut veal shanks – known as osso buco – liver, sirloin, chop, mince, burger, shoulder and ribs.


Calves are procured and collected fortnightly by Blade Farming and are delivered on to farms weekly.


Welfare is at the forefront of the veal revival, and to fit with the high welfare image it was important for the brand to be Freedom Food accredited. As a result, each calf is allocated a minimum of 4.5sq m of room at finished weight – more than double the room allocated to veal calves in Belgium.

At Branch Farm, meticulous attention to detail has been applied to the rearing unit to ensure the environment encourages and enhances calf health and growth.


“What’s made me go all out is that the history of veal is so bad. So I decided to take all of these bad points and work on them,” Mr Brend explains.


Determined to become a pioneer of new veal practices, Mr Brend hasn’t been afraid to put his money where his mouth is and has already invested £90,000 in state-of-the-art housing facilities, specifically for veal production.


The roof features a 2mm wide ventilated ridge, which creates a chimney effect. Fresh air is drawn in from the sides and stale air is pushed out of the roof to ensure a continuous flow of fresh air.


Calves arrive on farm at two weeks weighing approximately 50kg and it’s then that the hard work really starts.


They’re kept in medium-sized groups of 20 and are bedded down with fresh straw daily.


Feed, calves and medicine costs are all covered by Blade Farming, however Mr Brend has further controlled costs himself by working collaboratively with a local business five miles away.


“I have a good relationship with a potato grower. He has all of my muck to grow potatoes in return for straw from his corn crop.”


It’s a far cry from scenes of veal production of the 90s and it has already had the seal of approval from members of the public.


“I haven’t had anyone visiting that said anything other than good things,” says Mr Brend.


For the first six weeks calves are fed ad-lib starter powdered milk, which is high in protein to stimulate growth and acts as a creamy replacement for cows’ milk.


After six weeks they move on to another milk powder, lower in protein. At this point they also start receiving ad-lib barley straw to aid rumen digestion and have access to fresh water throughout their lifetime.


Milk is supplied through automatic milk feeders, which are calibrated manually each week. When the calves arrive, the machine is set to mix 56g of milk powder with one litre of water and this slowly increases to 110g/litre by the time the calves leave the farm.


Growth rates are monitored three times over the course of the 24-week cycle; once on arrival to check weights are correct, halfway through their stay and one month before they leave the premises.


“It gives me an idea of where my cattle are at and I can compare live weights with kill-out percentages and deadweights,” says Mr Brend.


All the data is then uploaded in to a bespoke recording programme called Blade Farmworks, so the team can monitor performance.


This ensures consistency across units and allows Blade to provide dairy farmers with feedback on calf quality, says Mr Phelps.


At 24 weeks (six months) the calves are slaughtered having achieved a daily liveweight gain of 1kg/day to take them to a target average of 110kg carcass weight.


But at Branch Farm calves are already exceeding this target.

Since Sainsbury’s launched the veal range under its own-label Taste the Difference range last year, sales have quickly gathered paced in 150 of the supermarket’s flagship stores.


The number of repeat purchases are also strong, which the supermarket says proves it’s delivering on quality.


“All the press around live exports put a lot of people off veal, but it’s starting to feature in food magazines and on the television and it’s becoming acceptable again, especially now there’s a British alternative. It’s also healthy and quick to cook.”


Annually Sainsbury’s is already selling £750,000-worth of veal products within the range a year and the aim is to increase sales to £1m by 2015.


And as discerning customers become ever more health-conscious, the brand is well on track to meeting that target.

Over the previous two batches of animals Mr Brend has averaged a carcass weight of 117kg and mortality rates were less than 3% at finishing (24 weeks).


This compares to calves being finished at 140kg carcass weight (or 0.97kg daily liveweight gain) at 32 weeks of age in Belgium.


“It just goes to show that even though our calves are lighter, our system is as good, if not better at delivering on daily liveweight gain,” says Mr Phelps.


Mr Brend says key to his success has been limiting stress on the animals.


“Happy calves are undoubtedly stress-free calves,” says Mr Brend, who monitors calf behaviour remotely through an app on his iPhone, which is connected to cameras inside the shed.


To prevent deteriorations in growth patterns, the calves are neither dehorned nor castrated.


“Their horns never grow to a size where they would be a problem anyway,” he adds.


After a 10-day cleanout the sheds are then restocked over a two-week period.


The farm is in the process of restocking sheds with its third and fourth batches of calves, but first-time veal producer Mr Brend is already learning from experience and has made a significant 10kg average carcass weight gain improvement between his first and second batches, which he hopes to improve even further this time.


Being part of a secure supply chain has given Mr Brend confidence moving forward.


“I now have a guaranteed return and there’s always room for discussion,” he says.


Mr Brend admits that veal production may not be everyone’s cup of tea, but as a first-generation farmer he says switching to indoor beef production has helped him make the best of what’s already available and minimise his overheads.


“Farmers have to look outside of the box and have to be willing to take a risk.


“Doing something just because their family has done it for three generations won’t cut it anymore.”