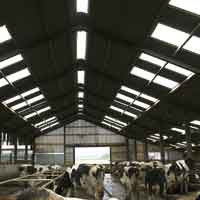 Farmers who cut corners on the cost of new cattle housing by not seeking professional advice on ventilation could pay the penalty with poor animal health.

According to beef producer, John Bevan, who paid a professional to design a new loose housing shed on his Pembrokeshire farm, with an emphasis on ventilation and airflow, it was money well spent.

“When the ventilation is wrong and you get pneumonia spreading through 200 animals it’s no joke,” says Mr Bevan.

“All buildings have a fixed ventilation capacity, which means that when it is either under-stocked or over-stocked air moisture levels will increase together with the survival time of airborne bacteria and viruses. This in turn leads to a reduction in the movement of clean, incoming air.

When heat is generated by housed cattle it rises towards the roof and escapes.

As it rises, the air cools so when there is insufficient stock to generate enough heat to push it up, this air forms condensation and falls back on to stock.

The dense cold air trapped in the building will prevent fresh air from getting in.

He says ventilation outlets should be in the roof to allow warm air and exhaled pathogens to leave the building – however, they must be positioned correctly for this principle to work.

In many older buildings, the ventilation ridge is above a central feed passage, not above where cattle are concentrated. This means heat from the cattle loses momentum as it rises and cannot escape quickly enough.

“As the heat generated rises it cools, loses momentum and forms condensation. When heat can’t escape from the quickest available route this is the result,” says Mr Owen.

“Many farmers think they can prevent this effect by opening doors at either end of a shed but this just doesn’t work. Hot air must be allowed to escape as soon as possible and unless it can get out it can’t be replaced by fresh air.”

Space needed for cattle housed in groups, should be based on their expected liveweight at the end of the housing period.

The feed passage is positioned along one side of the building and the ventilation ridge has been placed along the centre of the roof.

By partially opening the roof light and attaching a strip of 50mm x 50mm timber baton to the frame to the lower edge, stale air can escape through the small gaps either side. He recommends making this alteration to two roof lights a bay.

A simple check farmers can apply to establish if their sheds are adequately ventilated is the “cobweb test”. “When there are cobwebs in the building the ventilation is not working effectively,” he says.

This is true also if there is a dark area near the eaves as this is a sign that air is cooling before it reaches the ridge.