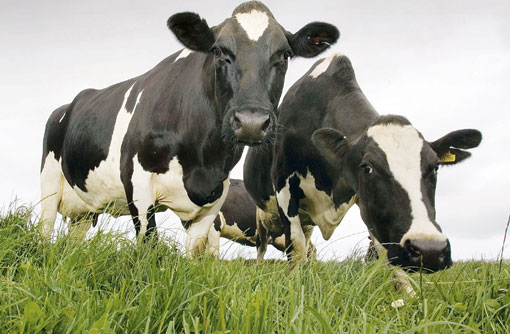 In Orkney it seems like spring has only just sprung. After a late turnout last year, this year’s calving has been much later with many cows still to calve. Another late turnout due to lack of grass means calving will no doubt slip again. Here we are, nearly at the longest day and silage is just starting to get cut. Growing grass is the one thing that Orkney does really well once it gets going, but Daddy Longlegs grubs are affecting some fields quite dramatically and our resident Greylag goose population also eat their share. A controlled cull of the geese will again take place this year to try and manage an increasingly destructive force.

Well the good weather has finally arrived, but it would seem there is always something sent to try those in farming.

For us in Cumbria, it’s been nematodirus in young lambs. We knew from SCOPS forecasting that the hatch was going to be late, coinciding with high numbers of vulnerable lambs turned out on infected pastures as sitting targets.

We were all pretty ready and went in eagerly armed with white drenches, as recommended, but are now knee deep in a resistance investigation with some farmers having lost a fair number of lambs. At this point, I feel it is essential that everybody look into their drenching practices. Calibrating the gun and ensuring 8ml really are 8ml seems trivial, but is one critical part of the resistance pathway.

The official DEFRA figures for holdings being affected by Schmallenberg don’t quite fit with our experiences. Most farms have had some animals born with deformities – does this mean that the whole herd or flock have not been infected? The vaccine is, at present, not licensed for use in pregnant animals thus it is vital to discuss with your vet as to whether to vaccinate these animals or not.

Clients who have a dedicated yard for fresh calvers do appear to have less LDAs. Calving is the most stressful time of a cow’s/heifer’s production cycle, the more this stress can be reduced the less health problems occur and thus the greater their productivity.

In preparation for bulls being turned out with cows we’ve been busy carrying out pre-breeding examinations to ensure these bulls are all fit for work.

This involves much more than collecting a semen sample and assessing sperm quality. We ensure each bull is in health, good condition and that his locomotion is sound.

An assessment is made of both the external and internal organs, particularly the penis and testicles, to ensure there are no abnormalities. We may also take blood samples to confirm the bull’s health status.

Even following such an examination there remains a need to watch each bull working to ensure semen is delivered to where it is needed – the anterior vagina of a bulling cow.