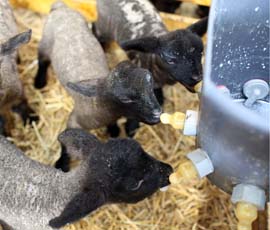 Vets are urging sheep producers to check their milk powder batch numbers as lamb sickness from recalled milk powders continues to be reported.

Milk replacer from Frank Wright Trouw Nutrition was withdrawn from the market a couple of weeks ago after excessive vitamin A was found to be the cause of several lamb deaths. However, some problems are still being reported as the message fails to reach some producers.

Vet John MacFarlane, Alnorthumbria Vets, said he had seen problems across 16 different farms. “I’ve only recently visited a farm with groups of 100 lambs looking awful. Within two days on a different batch of replacer they were shown to improve.”

Obvious signs include scouring, sweaty skin, hair loss around the eyes and in some cases, death.

However, Frank Wright Trouw Nutrition’s technical director John Allen said the company had done everything it could to inform merchants which affected batches should be recalled from farms. “I am very distressed to hear problems are still occurring. We phoned all relevant merchants as soon as the issue was identified and followed up with a letter.” Details have also been posted online.

Milk replacers from 27 distributors have been affected. Those affected have batch numbers commencing with 224-229. Products may be manufactured under distributor’s own label and in their own bags so farmers should check with their supplier or manufacturer.