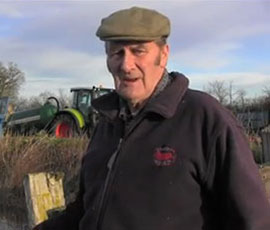 Devastating flooding has left an award-winning farmer facing tens of thousands of pounds of losses in valuable grassland.

Since the heavy rains fell at Christmas, every field at 83ha Otmoor Farm, in Horton-cum-Studley, Oxfordshire, has been flooded with waters up to 6ft high in places.

The farm flooded after the River Ray, less than a mile away, burst its banks and spilled floodwater across all of the fields.

Tenant farmer Terry Moore believes more dredging would have prevented his farm from being flooded and he blamed “more than 20 years of neglect from the Environment Agency” for the ecological disaster.

“It’s gone beyond a joke,” said Mr Moore, who was commended by Prince Charles and received an award for his efforts in bringing back the rare fen violet on his farm, which is under a Higher Level Stewardship scheme.

“My farm is going under water far too often and now it stays under water for weeks or even months on end. If it carries on like this, we will lose all the flowers all together, including the fen violet.”

An Environment Agency spokesman said: “In this financial year we will spend £45m on clearing rivers, however de-silting and dredging are not the most cost effective solutions to managing flood risk as often rivers rapidly silt up. We therefore focus our efforts on where this is proven to be most effective.

“In Oxfordshire in 2014 we have maintenance work planned on the River Ray, River Bure, Marlake Ditch, Wendlebury brook, Pingle stream, Langford brook and the Murcott Dyke. Maintenance work is planned in line with government policy to provide the greatest flood risk benefit.

“We want to make it as easy as possible for farmers to undertake appropriate maintenance work on rural watercourses themselves, while still ensuring that wildlife and the environment are properly protected. We are supporting DEFRA’s watercourse maintenance pilots programme and have also met with the Otmoor farmers on several occasions to advise them how they can best manage flood risk to their farmland.”

Read his full story only in this week’s Farmers Weekly, out Friday 17 January or subscribe to the magazine.