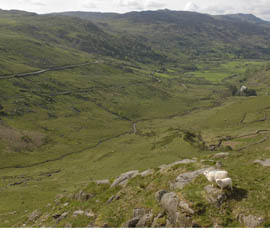 Wales exports more sheepmeat to countries outside the European Union than any other region, it has emerged.

While Europe is the largest single overseas market for Welsh lamb, Wales is the biggest exporter of sheepmeat to countries outside the EU.

Welsh lamb is exported to the Middle East, Singapore and Hong Kong and negotiations are continuing to allow its sale in mainland China.

“I am optimistic that we will have good news on this front sooner rather than later, especially since HCC accompanied Agriculture Commissioner Dacian Ciolos on a trade mission to Beijing last year,” Mr Davies told a gathering of European MPs and officials in Brussels on Wednesday (January 25).

“We were very encouraged by the positive signals made by the Chinese, who have since visited Welsh processing plants to see for themselves how Welsh lamb is produced.”

Late last year lamb produced in Wales went on sale in Canada for the first time, opening up the possibility that the United States could be next on the list.

“Part of the current trade negotiations between Europe and the USA involves lifting US restrictions on market access for our products, and I am pleased that the US Department of Agriculture is revising the situation. I hope that it can only be a matter of time before access is agreed,” said Mr Davies.

He was in Brussels for a Welsh breakfast function in the European Parliament building organised by the Farmers’ Union of Wales.