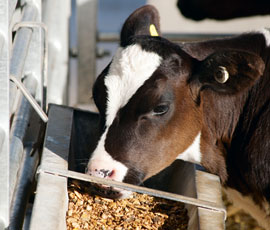 Correct weaning is vital to avoid growth checks and disruption to a calf’s future development, as Sarah Trickett reports.

A change in diet and new housing groups can cause weaning to be one of the most stressful periods in a calf’s life. But it doesn’t have to be. Weaning correctly can be done with little disruption, but planning is vital.

And with puberty largely driven by weight and size of an animal, making sure calves don’t experience setbacks at weaning, which could possibly lead to delayed puberty and breeding, is essential.

When does weaning take place?

Although six to eight weeks is seen as the industry’s recommended age for weaning, age of a calf should not be the only weaning criteria, explains Steven Morrison, head of sustainable livestock systems at the Agri-Food and Biosciences Institute.

“Concentrate intake should be the main weaning criteria. The main objective of calf rearing is firstly to rear a healthy calf but also to grow and develop a rumen. And since concentrate (starter diet) intake is a good indicator of rumen development, it is therefore a useful guide of when to wean,” he says.

Dr Morrison says the level of concentrate intake used to decide when to wean varies from farm to farm mainly due to different breeds used, but intakes should be in the range of 1-1.5kg a day with the average taken over a two to three-day period.

“Achieving target intakes are important to maintain the required growth rate of 0.8kg a day to get that calf to target breeding weight at 13 months old.”

When should concentrates be introduced and why are they important?

To get intakes of 1-1.5kg at six to eight weeks of age, calves need to be exposed to starter concentrate from just a few days old or as soon as they enter the calf rearing accommodation.

Although intakes of concentrates may be low at first, calves will start to feed on concentrates, whether pellet or coarser diets, from the first couple of weeks. However, the provision of concentrates from such a young age is vital for rumen development, adds Dr Morrison.

“The development of the rumen is largely driven by the fermentation of calf starter concentrate by rumen bacteria. The acids produced by rumen fermentation encourage the papillae in the rumen to grow. These papillae absorb the products of fermentation, which are then used to produce energy. So the greater the starter concentrate intake, the greater the growth in rumen papillae, thus preparing the calf for a non-milk based diet.”

Dr Morrison also stresses the importance of presenting the calf with fresh concentrates daily and locating the concentrates away from milk and water to prevent them getting wet. Water is also critical to rumen development and should always be available freely from birth, explains Dr Morrison. “Bacteria in the rumen require water to function and grow. Many producers may think water within milk/milk replacer is sufficient, but due to the oesophageal groove this bypasses the rumen and therefore is not available to the rumen bugs.”

Should forage be offered from a young age?

Traditionally, forage may have been seen as the main factor in rumen development, but research has found a sufficient level of concentrate intake must be achieved before high levels of forage in the form of hay/straw are encouraged, explains Dr Morrison. He says it is important to regulate forage intake pre-weaning to ensure forage is not being consumed instead of concentrates.

“It’s important to remember concentrates are the key driver in rumen development, not forage. However, forage can help prevent the rumen papillae from clumping together, as well as aiding muscular development in the rumen so it’s important some forage is available,” he says.

When should you begin reducing milk?

Ideally, milk should gradually be reduced over three to 10 days before weaning and the amount of concentrates provided stepped up, says Ms Carling. “It’s important to reduce milk in the quantity and frequency of feeding, and step up concentrates and roughage as you begin reducing milk.”

However, some farmers may operate an abrupt weaning strategy and Dr Morrison suggests this is suited where relatively low levels of milk are fed. However, gradual weaning is particularly important when calves are being fed high levels of milk/replacer as concentrate intakes tend to be lower, he says. “By reducing milk allowance gradually, calves are encouraged to eat more concentrates.”

And only once the calves are consuming 1kg a day should calves be fully weaned off milk, says Ms Carling. “It is very easy to miss a few calves that are not eating enough concentrate, particularly when they are housed in small groups. These individuals are the ones you need to pay particular attention to, as these are the ones that could have a growth check if you are not careful. When calves are not achieving sufficient concentrate intake it’s important weaning is delayed.”

How should I feed calves post-weaning?

Farmers changing from feeding pre-weaning pellets to post-weaning pellets should also adopt a gradual change, says Ms Carling. “It’s important never to change a diet at once, and change should be gradual to avoid nutritional scours. As calves approach weaning, begin adding in some post-weaning pellets in to the diet, so by the time you wean, the diet they are being fed will be the one they continue to eat post-weaning.”

Ms Carling also stresses the importance of getting the post-weaning diet correctly balanced. “It’s essential protein and fat levels are correctly balanced. If you grow a calf too fast you can end up with fat animals, but instead you want to be growing frame. So don’t just chuck energy at them without having enough protein to grow the frame.”

And because intakes are still relatively low post-weaning, DairyCo extension officer Chris Coxon says the diet density needs to be good at nearly 12MJ/kg of energy and 17% crude protein.

“The diet can then steadily drop to an energy density of 11MJ/kg with 16% crude protein for a seven-month-old heifer at about 200kg liveweight eating about 5kg dry matter feed a day,” he says.

How do you go about grouping animals at weaning?

Mixing animals at any stage in life will cause some level of stress due to animals establishing hierarchical positions, which in turn could cause a growth check, says Mr Coxon. “Ideally weaning should be done first and calves settled on a weaner ration before entering a larger group when intakes are consistent.”

Dr Morrison agrees and says despite some research finding no benefits in delaying the grouping of calves at weaning, calves should ideally be grouped either 10 days before or after weaning to help minimise stress.

Preventing other stressors around weaning is also vital, adds Ms Carling. “Pain, noise, restraint, restricting feed and water, crowding, mixing groups, heat, cold and separation from dam are all major stressors for calves. This means it’s important not to perform acts such as disbudding or castration at the same time,” she says.

Philip Metcalfe uses a computerised milking machine that aids weaning calves off milk. By one month old, calves are getting up to 6.4 litres a day, but by seven weeks old, the computerised system begins reducing the amount of milk being fed by half a litre a day over 10-12 days – automatically weaning the calves over a steady time period.

Mr Metcalfe, who was Volac Heifer Rearer of the Year 2010, appreciates the fact that maximising calf potential is equally as important as cow management. “A good start is essential because we target calving at 24 months and 96% achieve that date. In fact, one of our priorities for the future is to determine the impact of calf diet-milk replacer type and volume together with forage types on lifetime fertility and longevity,” he says.

“Weaning is just one of the pieces in the jigsaw that you have to get right for the system to work.”

Mr Metcalfe offers ad-lib concentrates as well as feeding milk, but says if he wasn’t using a computerised milk feeding system he would probably wean on weight.

“Because the machine automatically weans calves, sometimes some calves can be a bit small so we have to put them back on the machine. If we didn’t have the machine we would make sure they were eating enough concentrate and then wean when they were the right size,” he says.

David Merrin feeds his own pre-mix to his dairy beef calves, which arrive at two weeks old, from day one. For the first four to five weeks, the calves are fed milk replacer along with the premix, which consists of a blend of barley, maize distillers, soya hulls, soya beans, molasses and biscuit meal along with 8-10% of straw, which is chopped through the mixer wagon.

Mr Merrin gradually reduces the amount of milk replacer being fed and weans between 8-10 weeks or when the calves are eating 1.5-2kg a day. “I want to make sure calves are strong at weaning,” he says. “I find when calves are eating a lot of the ration I get less set-backs. That extra 0.5kg that they are eating really makes a big difference,” he says.

Over the past 12 weeks, Mr Merrin says he has only lost three calves out of 800 finished.

• Weaning on concentrate intake is better than milk alone

• Keep suckler stress to a minimum at weaning

• Raising welfare at calf weaning could increase productivity and profitability