Farmers have responded positively to the new Welsh Gwaredu BVD eradication scheme, which launched in September 2017.

Since then, according to the £9m scheme’s technical lead, vet Neil Paton, about 70% of the farmers offered screening have agreed to the test.

Of the 30% that have not been screened, the majority did not have stock eligible – youngstock aged between nine and 18 months – for screening.

As a result, Dr Paton said the programme has been adjusted to allow another opportunity later in the year.

There were some farms who declined the test, but this was mainly because they were already carrying out an existing BVD scheme.

Dr Paton describes the uptake as good, but added: “As always we would like to do better.”

Here he outlines the project and its key objectives:

What is the project?

An industry-led initiative to make Wales BVD free. The project supports testing to identify whether a farm is likely to have BVD; if the virus is present then the programme will support the vet and farmer in testing to find persistently infected (PI) animals.

This will allow the farmer to send these animals to slaughter and reduce the disease burden on farm. I animals are those whose dams have been exposed to the virus in early pregnancy and will always remain as a source of infection unless they are removed.

Many can appear normal, so a test can be the only means of identifying them.

How do I get involved?

All vets will offer the test at the annual TB test or at a pre-movement test; if neither of these options are possible the test can be arranged at another suitable opportunity. he farmer does not need to do anything, but it might be helpful to remind their veterinary practice at the time of booking a TB test.

Will it cost me anything or will it all be financed by the Welsh government?

The funding is through the Rural Development Plan (Wales) 2014-2020. The initial testing through blood sampling youngstock is free to the farmer; should they need to conduct a PI hunt then up to £500 is available per farm. To date, about 30 farms have taken up this offer.

If an animal tests positive, will I be forced to have it removed from the herd?

Our advice is to remove it as soon as possible. The project has no power to enforce the removal of a PI animal but that animal is, by its presence on farm, likely to be costing the business more than it will ever realise.

In addition, Wales is likely to follow Scotland and Ireland’s lead on BVD eradication, so compulsory removal may be part of that. It would be wise to use this scheme to become BVD free to avoid that possibility.

Will I be compensated for this?

As removal is not enforced there is no compensation, but PI animals can be sold for slaughter. This is what we would advise.

What happens if I’m already tag and testing calves? Can I still get involved with the scheme and will it be worthwhile?

Yes. It is a good check that your programme is working and nothing has been missed. It is not impossible that a PI animal has slipped through the net, so by allowing a blood sampling exercise you get peace of mind.

Are most farms infected?

There is no evidence of BVD on 70% of farms. It is important, however, that these farms talk to their vets about buying in safely, vaccination requirements, fencing and other risks that might bring in disease.

Buying in is most important, so ask the testing history of any animal that you intend to bring on to farm and react accordingly.

The BVD virus can suppress an animal’s immune system, affect the reproductive tract and will therefore result in production losses.

It is highly contagious because it can be spread directly, via nose-to-nose contact, urine, faeces, saliva, semen and embryos, and indirectly through visitors or equipment.

The disease can result in abortions, infertility, severe disease in calves and the birth of a persistently infected calf.

BVD outbreaks can occur where and when they are least expected. Therefore, Ceredigion beef farmer Ian Lloyd was keen to screen his herd even though a test three years ago had shown it to be clear of the disease.

Mr Lloyd runs a herd of 65 Simmental and Simmental-cross suckler cows and followers near Newcastle Emlyn. He finishes 90% of the offspring and retains the remainder as herd replacements.

He took advantage of the free Gwaredu BVD screening when his herd had its annual TB test in February.

“The first thing the vet said to me when he turned up on the farmyard for the TB test was, ‘Did I want to do the BVD test?’. I would have been foolish not to take up that offer,” admits Mr Lloyd, who farms 46.5ha at Hafan Hedd, Beulah. 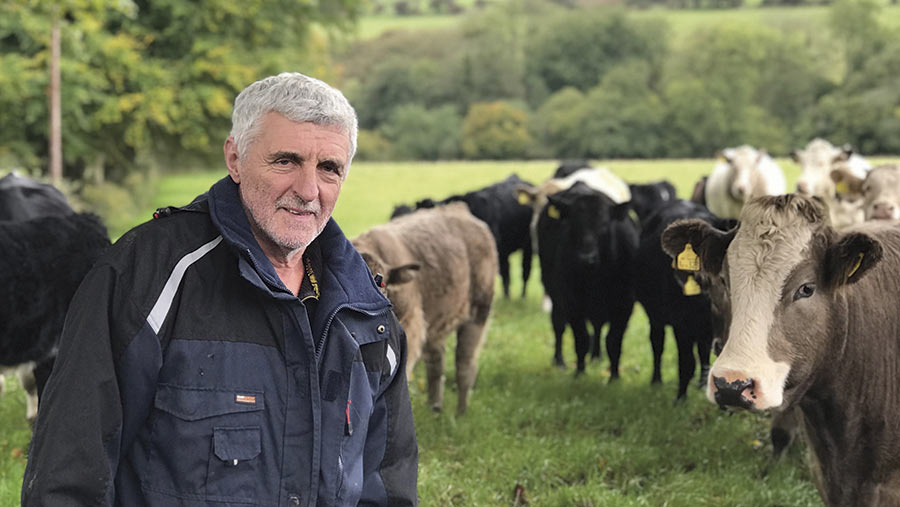 “He [the vet] tested five young heifers, they were already in the crush so it only added an extra quarter of an hour, if that, to the job.”

Mr Lloyd received the results three days later when the vet returned for the TB reading. All the animals had tested negative, for both TB and BVD.

“Apart from buying in a bull every two or three years, I keep a closed herd and we are quite lucky because the farms that surround us are horses and sheep, no cattle, so I was pretty confident that we didn’t have a problem.

“But the test didn’t cost me anything and I now know the status of the herd. That is very reassuring.”

He urges every cattle farmer to make use of the free test.

“Perhaps the farmers who haven’t had the test don’t realise the serious and long-term implications of having BVD undetected in their herd,” suggests Mr Lloyd, who is chairman of the Farmers’ Union of Wales Animal Health Committee.

“I want to keep a healthy herd. I have always taken an interest in the health of the herd, in fact if I had tried harder in school I would have liked to have become a vet.

“I have kept sucklers for 40 years and never had any serious disease issues, but even with that history I can’t afford to be complacent.”