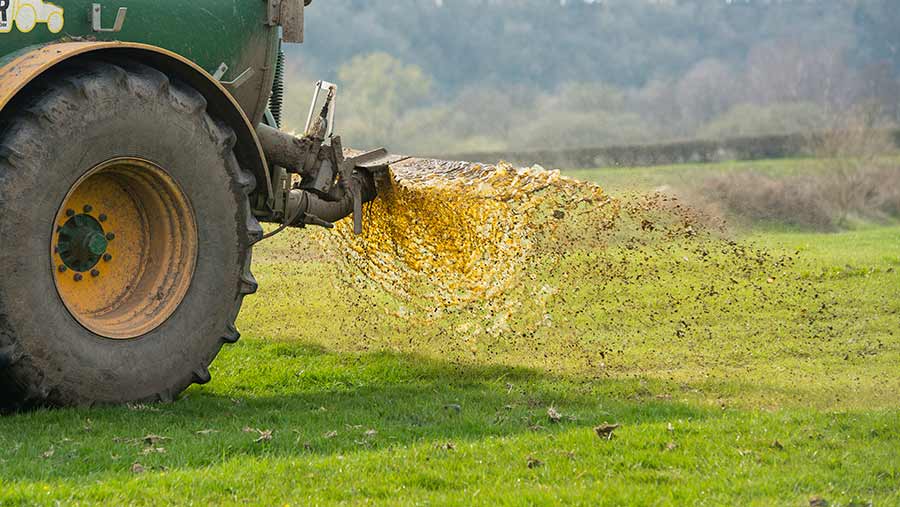 Wales has stopped short of introducing a blanket approach to Nitrate Vulnerable Zone (NVZ) designation, opting instead for a mix of regulation and voluntary measures.

Instead of compelling all farms to comply with restrictions on slurry and fertiliser application, the Welsh government said it would strike a balance between “regulatory measures, voluntary initiatives and investment”.

The announcement comes more than a year after the Welsh government first launched a consultation giving two alternative options.

It had considered a whole territory approach and also a targeted designation – the latter would have seen the area of designated land increase from 2.4% to 8% and would have meant significant changes to NVZ designation in Pembrokeshire, Carmarthen and Anglesey.

A whole Wales approach – similar to measures already in place in Northern Ireland – means that dairy and livestock farms across Wales could potentially have limits imposed on total nitrate inputs.

But the decision to not introduce compulsory Wales-wide NVZ measures has been welcomed by the Farmers’ Union of Wales.

“This seems to be a far more proportionate way forward than some of the options that had been proposed, but we need time to assess the details and their implications,” said the union’s president, Glyn Roberts.

It had been argued that a whole Wales approach would avoid price disparities between land values and farm production costs and help avoid perceived inequality between designated farms and those that fell outside zones.

No date has yet been given on when the new rules will come into force.

Rural affairs secretary, Lesley Griffiths, said she would now work with stakeholders to get the “right balance of regulatory measures, voluntary initiatives and investment.”

She did hint that there could be flexibility, with a different approach taken if it could achieve the same or better outcomes than regulation.

Ms Griffiths described agricultural use of nitrates as a major source of water pollution.

“Pollution of this kind is entirely preventable and is simply not acceptable in the 21st century.

“We should not at the end of 2017 see significant stretches of some of our most well-known and popular rivers largely devoid of fish, proving just how much work remains to be done.

Although Wales is bound by the EC Nitrates Directive to reduce pollution of streams and rivers, the government had insisted that nitrate pollution would be tackled regardless of Brexit.