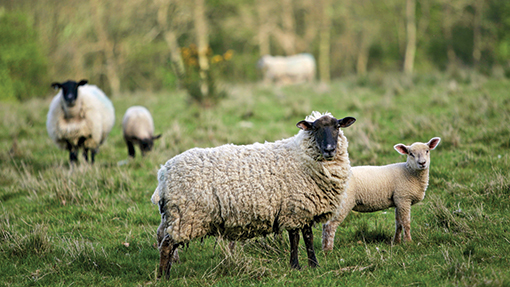 Woodland can have a valuable role in extending the grazing season and improving the performance of lambs and cattle.

Giving over small areas of pasture to new tree plantings can improve grass growth, as well as help farmers manage costly diseases such as liver fluke and lameness.

Back in the 1970s, there was a move towards larger farms with the removal of copses and hedges, which led to a simplification of the landscape, says Mike Townsend of the Woodland Trust.

“However by the late 1990s, three farmers in mid-Wales were dissatisfied with their systems and they switched to local breeds and outdoor lambing.”

He says they realised that more shelter was needed, so decided to restore woodland and shelter strips.

Neighbours joined in and now 10 farmers are involved in the Pontbren Farmers project, a farmer-led initiative using trees to improve the efficiency of upland livestock farming.

The move to outdoor lambing or early turnout reduced labour costs, but it put the focus on lamb losses.

“Exposure to cold is the biggest cause of neonatal lamb losses and mortality can be reduced with well-placed shelter belts,” says Mr Townsend.

“They found lamb losses can be reduced by up to 30% with good shelter and avoiding wet conditions.”

However, it must have good low cover at sheep level, so shrubs are crucial for lambing areas. “You need more shrubs than seen in standard woods and forest, he says.

There are also environmental benefits of tree planting, which include reducing over field run off, which is known to leach more soil and nutrients than field drains.

Mr Townsend believes there are huge gains for potentially reducing flood risk in catchments by increasing woodland from 1.5% of the area to 5%, as achieved in the Pontbren project.

“We are not talking about planting half the farm, just a relatively modest increase. It is a doable level of planting if put in the right place,” he adds.

There are several measures which need to be deployed when successfully tackling fluke, including early identification and treatment, protecting stock (keeping stock away from snails) and protecting pasture (preventing sheep or cattle shedding fluke eggs on pasture), she explains.

“You don’t want sheep or cattle picking up metacercaria (fluke cysts) on herbage.”

A key part of the liver fluke lifecycle is within intermediate host mud snails, which need mud and tend to live on wetter land.

Wet, low lying areas could, therefore, be planted with trees and fencing it off will help remove some of this snail habitat, she says.

Planting trees and fencing off wetter areas also has lameness benefits (when deployed with the five-point plan) with better ground conditions and less surface water.

It is not just sheep farmers, dairy herds can benefit too and organic dairy farmer Tim Downes is planting experimental tree areas on his farm in Shropshire. He runs a 250-cow organic herd plus he finishes beef for Waitrose.

“We have lost a generation of trees with few being planted because they are seen as a pain, particularly in field trees.”

He has already planted 1ha of mixed broad-leaved trees including hornbeam, sycamore, disease resistant elm and small-leaved limes for cows to graze. He plans to run an electric fence around them and monitor which species they graze and the affect on milk yield and health.

He also plans to investigate medicinal trees (mainly willow), to see if cows will self medicate when there are any health problems.

The ongoing implementation of the new CAP regime means much detail still needs to be worked out for England, Wales and Scotland regarding woodland grants.

However, one key change in England is that woodland is being merged with the farmland under a single scheme.

In addition to woodland options under Nelms, there will be other tree related options including hedgerows, in field trees and orchards. There will be an interim scheme for 2015-16 tree plantings with the first Nelms going live in 2016.

In Wales, Glastir is still under review.

The woodland creation grant will not be available until 2015